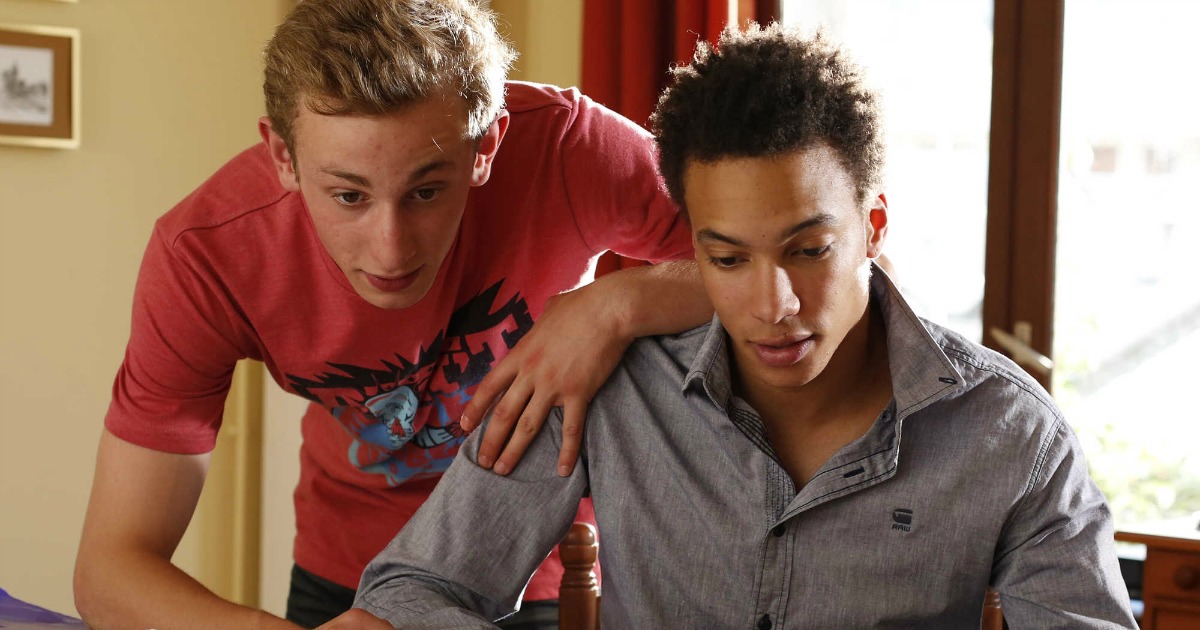 With a title like Being 17, images of gorgeous 20-somethings brooding about the confines of a high school in a Sundance-saccharine “indie” are conjured. Having the air of a forgettable comedy one’s parents might champion, without much knowledge of the project and the creative team behind it, looking at that title may not instill confidence when trying to pick a film to watch during a weekend. However, that would be an absolute shame as it is more than worth the nearly two hours it asks of you.

Directed by Andre Techine and written by Celine Sciamma (whose own Girlhood is one of this decade’s great coming of age tales), Being 17 tells the story of two French teens from different walks of life, both dealing with growing desires they aren’t sure how to handle. First we meet Damien (Kacey Mottet Klein), whose mother is a beloved doctor and whose father is a respected military man. When he’s tripped one day at school, he begins having a gradually more and more violent back and forth with another young man named Thomas (Corentin Fila). However, when the two men are forced to live under the same roof after Damien’s mother offers Thomas a place to stay while his pregnant mother gets medical attention, things gradually evolve in directions that may seem predictable narratively but no less emotionally elegant.

One of France’s most respected filmmakers, Techine crafts a shockingly pretty motion picture. Continuing to look at the lives of young men and women as he has in recent films like the superlative Wild Reeds, his latest is a beast entirely its own. Be it the stark use of close up throughout the film or the beautiful photography his film gets from cinematographer Julien Hirsch, Techine’s hand is assured and nuanced, particularly keen to the kinetic nature of “being” 17 years old. It’s a film of gestures and actions, with the filmmaking carrying with it an energy that one admittedly may need a few beats to get accustomed to. The story is told in minuscule revelations, with tension building slowly but with potency one rarely sees.

Partially taking place in the Pyrenees, much of the picture takes place in a relatively rural setting, with the environment mirroring the central narrative. The opening act and change is emotionally charged, yet rightly frigid, with the two leads at odds as much as the population is with its icy cold, snow covered surroundings. The performances here are constantly on edge, with both men understanding what they desire (be it sexually or in much broader, everyday terms) but unsure how to handle it. As the relationship grows the film becomes more warm and enveloping, as the performances become equally expansive, growing to become deeply nuanced meditations on modern pre-adulthood.

The two leads are great on their own, with one supporting turn helping to round out this top tier cast. Sandrine Kiberlain takes on the role of Damien’s mother, and it’s a towering supporting turn. She absolutely takes a back seat to the central narrative, but her role in the film is one of great nuance and helps center the film emotionally, a film that toys very much in the realm of modern melodrama. She herself is dealing with a life of uncertainty and it’s a lovely and tender supportive performance.

Co-written by filmmaker Sciamma, Being 17 is a lovely and emotionally wrought bit of melodrama, elevated by a creative team with profound understanding of young adult experiences. Adorned with two star making performances and a sense of place and character that feels both singular and universal, Techine’s latest takes a few beats to get in synch with. It has a narrative that’s a pinch too long and can occasionally feel a bit too predictable, but it becomes utterly magnetic thanks to an assured filmmaker at the helm, a solid script and an actor collective that gives some of the best performances of the year so far.