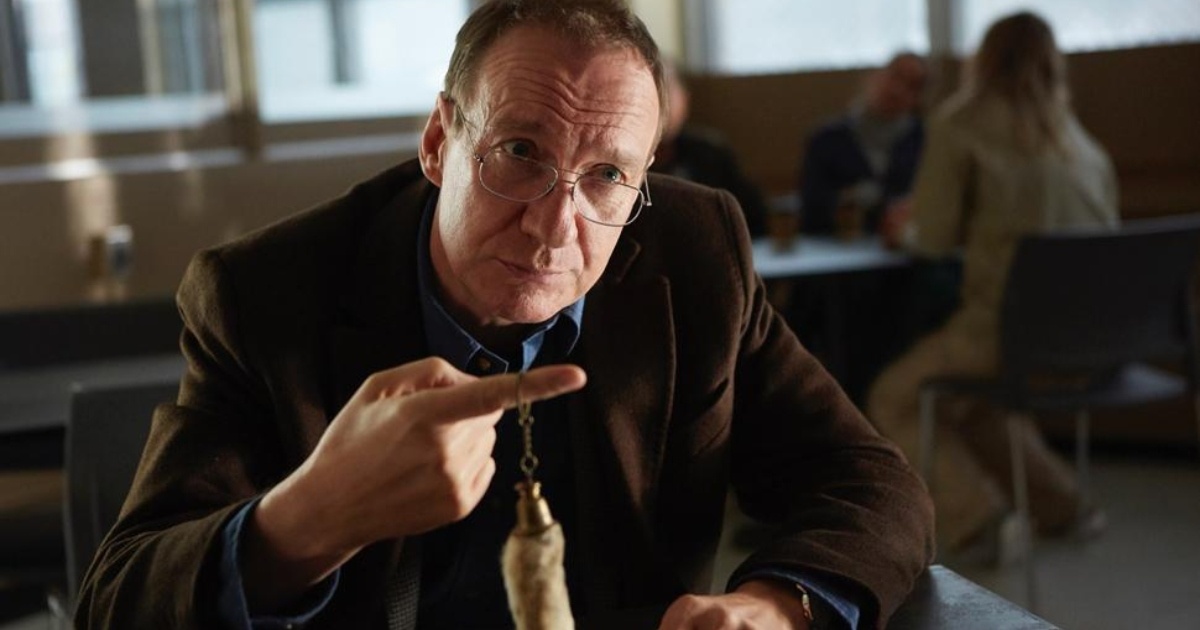 Seemingly thrust back into the cultural conversation with a prime spot as part of the July 2020 Criterion Channel streaming service (we are nothing if not an always on-brand website, of course), director Atom Egoyan is having something of a moment. As cinephiles reassess the director’s works, the polarizing Canadian auteur has returned with a new feature film, now available from Kino Lorber through their Kino Marquee service.

In Guest of Honour, the director has crafted yet another strange drama, this time of Veronica (Laysla De Oliveira), the daughter of health inspector Jim Davis (David Thewlis) who, upon the family patriarch’s death, attempts to walk viewers through their relationship in the form of a conversation with a priest (Luke Wilson) who will be performing his funeral service. Jumping through space and time in typical Egoyan fashion, the film flashes back and flashes back within those flashbacks all with the hopes of better understanding both the relationship that the two shared but also how they ultimately got to the place they had in the moments before his passing.

The structure is rightly knotty, as one should expect from Egoyan. Viewers become privy to both the relationship between Veronica and Jim close to his death, which saw the former in prison and the latter quietly lashing out at various eating establishments in some sort of reactionary response to his helplessness in that fact. Then flashing even further back the film attempts to set the stage, in its own way, for that ultimate breaking of their connection, a transgression that viewers can decide on their own as to how modulated the response truly was.

Notice the use of “knotty” and not “convoluted” in the description of the plot. While trying to summarize the plot could give one a hemorrhage, it’s not impossible, as Egoyan remains one of today’s great narrative architects. Each flashback and subsequent time hop forward is clear and strangely muted, as is most of the emotion the film carries with it. An increasingly quiet film, this owes much more to the vein of films that made the director famous in the ‘80s and ‘90s than the strange diversions into melodrama that he’s become known for in this back end of his career. He reveals details with almost surgical precision, ramping up the tension and emotion ever so slightly as to make for a film that is utterly engrossing despite barely feeling as though it ever has much more than a faint pulse.

David Thewlis is also quite fantastic here. Much more muted than his most beloved roles, there’s a quietly petulant anger behind his eyes, manifesting in moments like his framing of a restaurant in the hopes of being able to blackmail them following his daughters arrest. It’s an incredibly modulated performance that’s equal parts fascinating and grotesque, turning what at first appears to be a relatively mild-mannered health inspector into something both monstrous and yet decidedly human. It’s an incredible bit of writing and an even more incredible bit of acting from a performer at the peak of their powers. De Oliveira carries her own weight as well in an even more textured role, a performance that plays into Egoyan’s quiet but often absurd direction and storytelling.

That’s the thing that seems to have been missing from the Egoyan pot the last handful of films. What viewers see in Guest is a filmmaker returning to some semblance of form, crafting an admittedly thin film yet one that feels truly unlike any other film than his very own. Egoyan is a director of melodrama in the same way someone David Lynch is, in that the melodrama is brought to life in ways often mistaken for camp but are more simply a level of sincere intensity that most find off putting. De Oliveira’s performance completely embraces this utter lack of naturalism, pairing opposite her more reserved father in a manner that only amps up the chasm between them. It’s a canny performance that finds an actor and director truly connected.