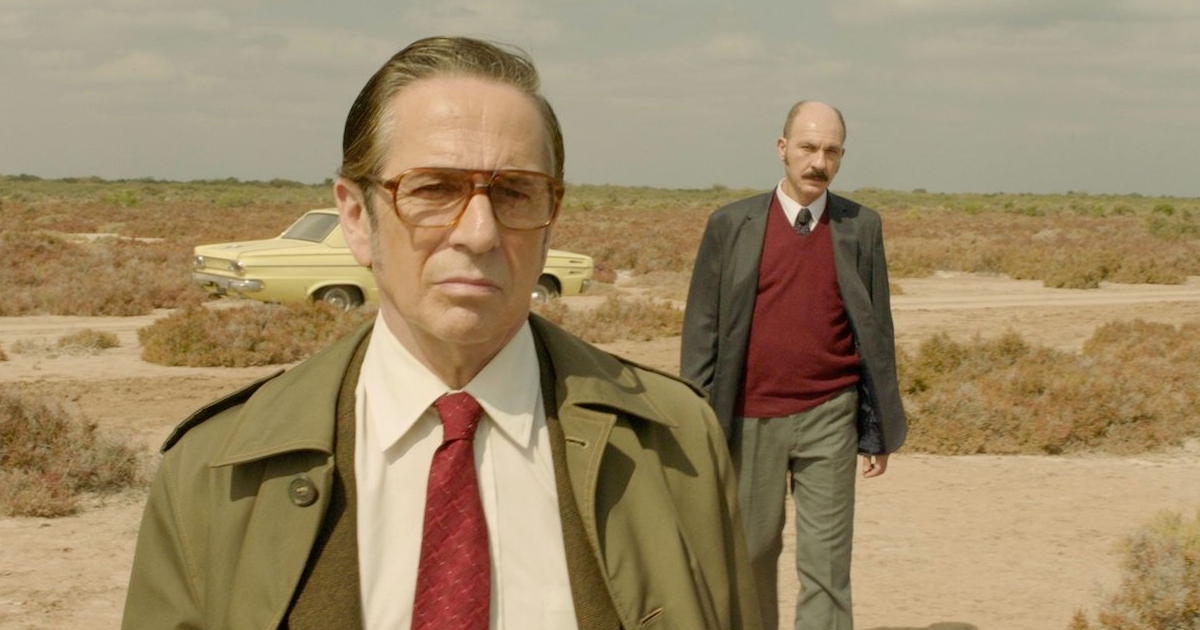 Just now three films into his career, writer/director Benjamin Naishtat has become one of the most exciting young voices not just of the fruitful Argentine film scene but of world cinema writ large.

Following the quasi-experimental masterpieces History of Fear and El Movimiento, Naishtat has returned with what is one of his more interesting and easy his most accessible work to date. Entitled Rojo, the film tells the story of Claudio (Dario Grandinetti of Talk To Her fame), a well-respected lawyer living a quiet, picture-perfect life in a quiet, picture-perfect city in mid-70s, Dirty War-era Argentina. However, this life is upended after a stranger accosts Claudio in a restaurant one evening, only to take revenge on the unassuming man he felt did him wrong. Once a famous, almost Al Pacino-like private detective shows up things go to hell even quicker, in what is Naishtat’s most conventional, yet politically charged, work to date.

A tragicomedy of sorts, Rojo sees Naishtat dive head first into the history of his native Argentina, a point in time in which politics was knotty and violent, with people seeming to disappear out of thin air during the days of the country’s Dirty War. With much of the politics handled on the periphery, Rojo deals with these issues in an allusory, elliptical manner, instead making them some form of window dressing opposite a rough and tumble crime story itself feeling influenced by Western films of this mid-70s time period. Naishtat’s direction clearly draws from this era of filmmaking, with his use of split diopter shots, muddy photography and strange angles, with photographer Pedro Sotero (Aquarius) proving to be at the very height of his powers here. Specifically when the film veers into the surreal, manifested in a scene that shall not be spoiled for fear of ruining the sense of ground shifting under the viewer, a scene that saturates the screen in a way that feels both right for this strangely obscure crime picture and also completely blindsiding.

Thankfully, for a film as elliptical as this, the performances here are quite good. Grandinetti is incredible here as the film’s lead, a fallen man in this morality play. Styled perfectly for the period, this neo-noir of sorts sees its morality play across through Grandinetti’s compromised lead character, a character who evolves from seemingly well-to-do family man into something much more textured and compelling. Making every decision out of protection for himself, no matter how morally corrupt, this character is a perfectly mannered encapsulation of the film’s central themes, and comes to life fully thanks to Grandinetti’s physical turn. For a film full of references that will surely leave many viewers scratching their heads, it shows how mature a writer and director Naishtat is, that he gives his narrative an emotional center that, while distant, grabs the viewer by the lapels.

Clocking in at 109 minutes, Rojo isn’t a film that will be for some (read: most) viewers. The script veers into directions that sometimes lead to little more than curious digressions and is chock a block with references to a political moment that may leave some cold. However, if one comes to the film open to an experience that may be a bit more obtuse, told through a fittingly cold crime thriller, this should become something of a hit on the arthouse circuit. It’s got a connection to a legendary moment in genre cinema history, and for that alone it should play as the biggest and most widely seen film in Naishtat’s filmography yet.