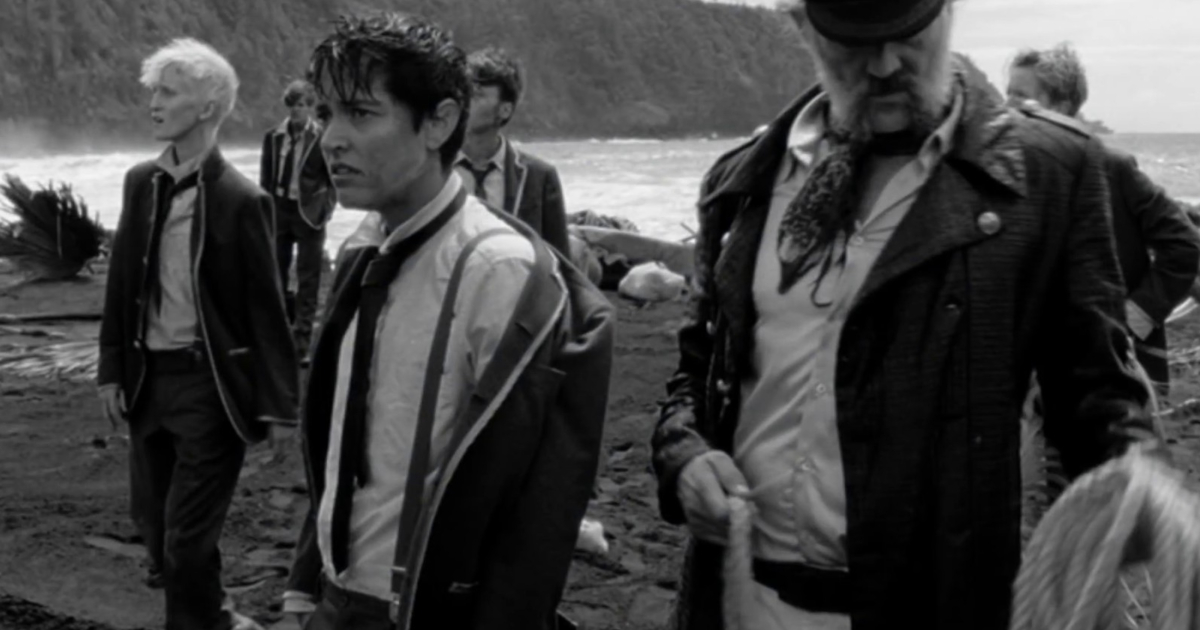 Debut films shouldn’t be as assured and singularly visionary as The Wild Boys.

The first film from filmmaker Bertrand Mandico, Wild Boys is a film driven in most eyes by a superficial gimmick, the casting of women in specifically male roles, that turns this conceit into one of the year’s most exciting and surreal provocations about gender and sexuality.

Wild Boys introduces viewers to Tanguy (Anael Snoek), leader of a ragtag group of young men who we first meet while they’re out on an excursion reading from Macbeth. What starts as a gorgeous and lusty day turns into one soaked in violence, as the five young men kidnap their teacher, strap her to a horse, masturbate around her and ultimately watch as she dies in front of their eyes, all in the name of some unholy spirit named TREVOR. As punishment, the boys are put in the control of a salty sea captain who attempts to “re-educate” them before landing on an island that sees them slowly evolve in previously unforeseen ways.

Mandico is a new voice in feature film directing, and yet his influences are perfectly distilled here. Clearly influenced by the opulent surrealism of Guy Maddin, Wild Boys is gorgeously shot in 16mm and in Academy ratio, jumping between stark black and white and baroque color sequences. The black and white beats (spearheaded by a lengthy portion during the middle of the film) are contrast-heavy and utterly impressionistic, with the hazy color sequences more resembling the nightmarescapes made famous by the aforementioned Canadian icon. What’s also clearly influencing the young artist is the work of Walerian Borowczyk. Very much seen in the color sequences alongside clear nods to Maddin, Borowczyk’s clearest influence is in the relationship between the characters and their bodies, and the film’s overall fable-like spin on bodily perversion. As the film progresses the young boys begin to not only get sexually intimate with one another but see their bodies literally fall apart and become reborn in new ways, playing as both a nightmare and something perversely beautiful. This is exactly the case for the very best of Borowczyk’s films, and this nuance and textured look at one’s relationship to gender and sexuality is absolutely captivating.

At its very best, the film is a surrealist fairy-tale, and in that, it absolutely succeeds. The performances are abstract but utterly incredible nonetheless, each playing into the otherworldly nature of the film and giving themselves completely over to this absurdly strange picture. There are shocking moments of emotional resonance that add depth to this film, many of which do come from Mandico’s direction but only work if the performances are full of conviction and humanity. Transgressive from the very outset, Wild Boys is a film of profound artiface. Every single sequence feels of an entirely different world. Despite its location shooting, every scene feels shot on the most impressively designed sets of the year, and from group masturbation scenes that feel almost comically false to a sex scene near the middle of the film that also oozes an artifice but also feels shocking and emotionally devastating in a way that only films digging into deep human truths truly could. Every frame is dripping with a sense of style that’s incredibly assured in both its referential influences and also the sense of singular truth that it is attempting to dive deep into. It’s a very special, small-scale picture that is as thought-provoking as it is gobsmackingly beautiful.