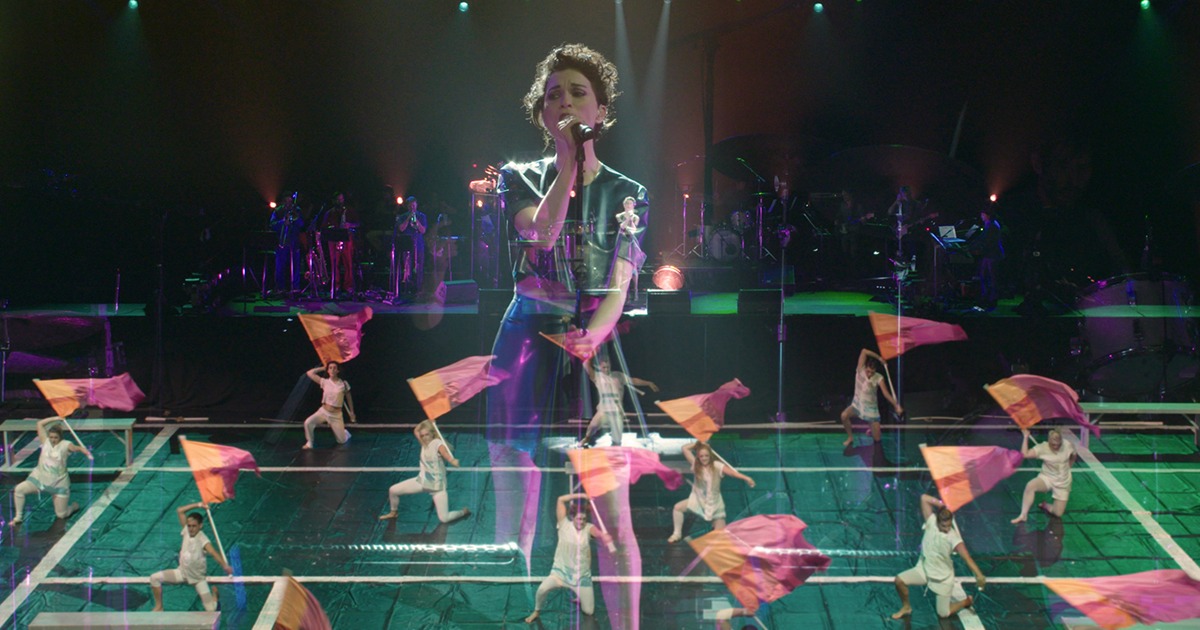 There are few subcultures more niche than that of “the color guard.” The vast majority of people may know them only as those performers working alongside high school marching bands during football games each fall. Young men and women taking to the field to perform routines heavily centered around the use of flags, rifles and sabers, these routines are more often than not overlooked by people waiting for the next play of whatever game they’re partaking in.

However, not in the eyes of iconic musician David Byrne.

In the summer of 2015, Byrne took to Brooklyn’s Barclays Center, along with a collection of some of today’s greatest artists and color guard teams to shine a light on the real beauty, importance and power of this artform. And filmmakers Bill and Turner Ross were there to capture it.

The film born from this event is called Contemporary Color and is a breathlessly beautiful, if weirdly slight, piece of filmmaking.

Bill Ross IV and Turner Ross may not be household names, even in the most studied of film circles, but documentary hounds have certainly been wowed by their work previously. Best known for the one-two punch of Tchoupitoulas and Western, their impressionistic spin on non-fiction cinema has placed them in their own realm of documentary, a deeply moving and startlingly visual one at that. However, Contemporary Color finds the substance never quite matching the aesthetic.

The greatest aspect of the duo’s latest film is the aesthetic. While the narrative doesn’t quite delve deep enough into the lives of any of the young men and women center to this performance, the almost surreal style brought to the proceedings is weirdly moving. Be it the superimpositions they use, the fades that are seen during each performance or the directors’ use of focus, Color has a deeply painterly feel to it. Performances by names like Devonte Hynes and How To Dress Well hint most loudly at this use of aesthetic as a vessel for emotional import. These sequences subvert expectations for a concert documentary, offering up deep insight into the mindset of these young performers and the importance of color guard in their lives.

Which is why the backstage sequences are so weirdly bland and uninteresting. Be it sequences of Byrne himself pacing backstage or verite style moments set in the dressing rooms of various performers here, we rarely get a real sense of who any of these major artists are, and even less so the students who are central to this event. It begins with a sense that what will follow is an almost Dave Chappelle’s Block Party-style cultural doc that’s simply in the body of a concert film, but when we take a step off the main stage, it simply fails to offer much of an insight into what this art really means and the type of connection any of these performers have to it.

But a concert film is all about the performances, right? If that’s one’s line of thought than this is a superlative feature. Bill and Turner Ross are some of today’s most interesting documentary filmmakers, and each set piece offers up a moment of true beauty or emotional resonance. Be it the use of voice over in the Nico Muhly and Ira Glass segment or the use of slow motion in the film’s best sequence, backed by maybe the best song How To Dress Well has ever composed, when we’re on that stage, in that moment with these performers, there are few things more captivating. It’s a type of unifying, safe, escapism that in today’s world we don’t have enough of. If only it offered up something more to chew on after the fact.