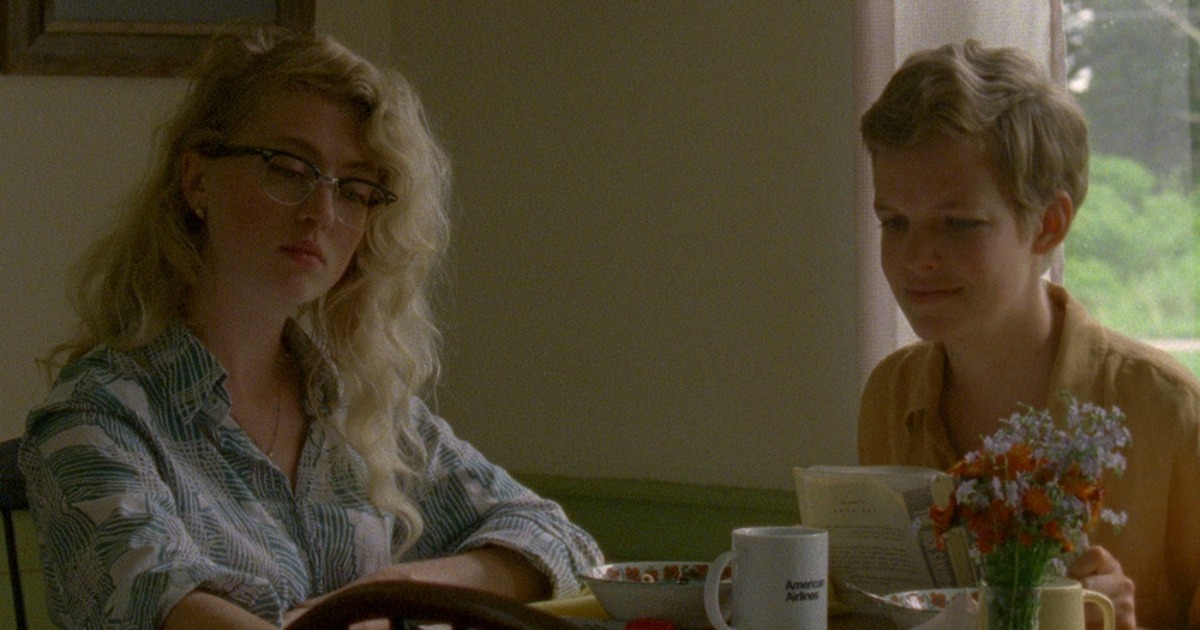 It’s not every day that an avant-garde/experimental picture both makes its way to theaters and also has a relatively modest marketing push behind it. Released by Factory 25, and eyeing both a Blu-ray release for the feature itself as well as a vinyl release for its great Keiichi Suzuki score, For The Plasma is just that rare type of art comedy that will hopefully go from the festival world (it played festivals like BAMcinemaFest as well as IndieLisboa) to find an audience in general release.

The debut feature from Bingham Bryant and Kyle Molzan, For The Plasma introduces us to Helen (Rosalie Lowe), a woman living in a remote cabin in Maine forest whose job it is to keep an eye on potential forest fires. However, while looking at numerous monitors all day, she has uncovered something highly profitable within these feeds. When her friend Charlie (Anabelle LeMieux) arrives, Helen informs her that she’s able to take these feeds, and through a method that’s both convoluted and utterly absurd, she can predict trends in the global finance markets. As the film progresses this aspect becomes more of a red herring with the pair’s relationship taking center stage, as we watch their friendship dissolve amidst cameras, deception and uncertainty.

Shot entirely on 16mm, the film’s greatest aspect is arguably its aesthetic. First time filmmakers Bryant and Molzan ship us up to Maine and while there are no flashy camera tricks used here, each of the film’s relatively modest tableaus is a striking image. The photography turns each image into an enchanting piece of work, be it something minor like a woman drawing random circles on a newspaper or another finding mysterious wooden frames in the woods. Shooting on 16mm gives the film a hazy quality, that imbues the film with a tactile quality, like you’re watching a CCTV feed from a universe just one notch away from ours.

With Rivette and Lynch as influences, Bryant and Molzan have made a film that is as gorgeous as it is utterly impenetrable. Frustratingly obtuse, the film hinges on the two very good lead performances. Both Lowe and LeMieux are superb here, their friendship feeling both one with the intrinsic absurdity of the world around them and yet oddly relatable. A film inherently about the search for meaning in a world where that’s less and less clear, these two performances act as the viewer’s anchor. Lowe and LeMieux give naturalistic performances, adding a sense of realism to the proceedings, and when the relationship begins to devolve the emotions heighten, with each beat feeling right within this picture.

Clocking in at just a pinch over 90 minutes, the film is extremely overlong. While it’s hard to turn away from this bizarre and beautiful 16mm comedy/drama, it is long in the teeth, with a digression involving a nearby lighthouse watchman that is enjoyably absurd but entirely superficial to the central narrative. The Keiichi Suzuki-composed score (if that name’s familiar it’s because Suzuki is behind scores for films like Takeshi Kitano’s Outrage and Satoshi Kon’s Tokyo Godfathers) helps keep the picture engaging during these lulls, particularly when it’s electronic tones are taken against the textured Maine-set 16mm photography.

While the 94 minute film may be a touch too long and might be a touch too obtuse for many viewers, those willing to go with the film’s ebbs and flows will find a deeply touching meditation on loneliness and companionship that marks the debut of two truly interesting young filmmakers.