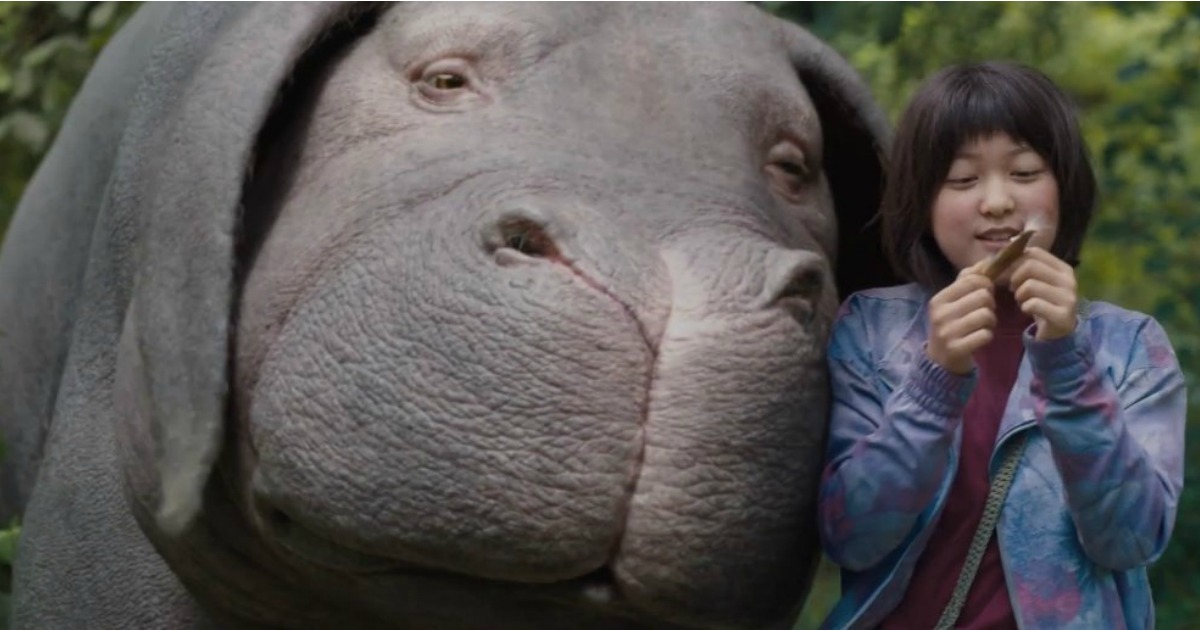 It’s not every day that a film’s release becomes more controversial than either the film’s quality or the merits of its narrative. However, when you’re a Netflix-backed, initially Cannes-approved drama/comedy, you’re apparently set for a firestorm.

That was the case for director Bong Joon-ho and his latest effort, the delightfully weird and completely uneven Okja. Getting the ever-important Cannes stamp initially, the film and all of its Netflix support sparked great outrage on the Croisette, as it has become something of a lightning rod for the polarizing discussion that is surrounding the very future of film distribution. But what has seemingly gotten lost in the shuffle is what ultimately started the whole fracas. With auteur credentials and a cast to die for, it’s no wonder the team programming the Cannes Film Festival decided to add it to its 2017 ranks. But is it ultimately worthy of that status?

It’s a touch difficult to truly answer that. First, the bones. Okja introduces us to Mija, an average young woman who has a profoundly above average pet. From the outset, we see that this is a world that’s not just a touch more heightened than our own, but one that feels like our modern world taken to its logical evolutionary moment. The caretaker of a massive pig-like genetically modified creature named Okja, Mija and her family have their lives upended when a global conglomerate named Mirando Corporation takes the lovable beast for their own, with nothing but capitalistic evil as their ultimate goal. Evolving from an absurdist satire into an action road picture and meeting ultimately somewhere even more surreal, Okja takes its mild-mannered lead Mija and takes her on a journey that has her cross paths with everyone from global capitalists to animal rights activists and even two of the most weirdly magnetic supporting performances you’re bound to see this year.

As manifested by the film’s narrative, Okja is at once a complete mess and yet a bizarrely entrancing meshing of tones, moods and even genres. Bong Joon-ho has spent his entire career mixing these genres, most successfully in films like The Host, which this very much feels in conversation with. At its heart a cultural satire about modern capitalism with specific eyes towards consumerism and food, it pulls zero punches. We are introduced to Mirando from the very beginning of the picture, and their plan to cultivate genetically mutated organisms to be sold as food. But, who wants to eat mutated food, you ask? What if the face of the product is an absolutely adorable, gigantic pig-like creature? That’s the goal for the company, and they ultimately create a creature that we come face to face with in the form of the titular character. Their plan is even more manipulative, as they task 26 farmers from across the globe to cultivate these beasts, with the plan to turn the product into a proverbial global entity. This is the heart of the film’s satire, and while one can scoff at the idea of being anti-GMO, there’s a very real anti-capitalist bent to this that is specifically exciting and engrossing.

But then the rest of the film happens, and it’s all kind of a mess. When Mija hits the road, the film evolves from a poignant political satire into something of a fable, that never quite hits the right beats. The comedy here falls flat, which makes the crisply shot and choreographed action set pieces all the more jarring. There’s a realism to the action set pieces that feels out of place in an otherwise cartoonish picture, which isn’t helped by some performances that feel entirely out of place in the broader film. Tilda Swinton co-stars here as the leader of the evil organization, and yet again has her energy harnessed for a performance that feels out of place in the hands of Bong Joon-ho. As is the performance from Jake Gyllenhaal as the literal face of the company’s promotional material, which is quite possibly the actor’s weirdest (read: worst) work of his career. Paul Dano is great here, as is the film’s lead, An Seo Hyun, who absolutely steals the show. Her work in relation to a CGI character is some of the most moving work of this type, an acting process that one can only imagine being both distancing and deeply frustrating. And conceptually, all of this works. The idea of heightened tones and performances in a narrative that has its eyes set towards satire should ultimately work. However, the issue here isn’t so much in the pieces taken in a vacuum than them taken as one. The handling of the comedy and the action together feels disjointed, and while the finale is devastating, it feels out of place when taken against some of the film’s campier moments. It is in the execution of the shifting of mood and genre that ultimately does the picture in.

But what saves this film, ultimately, is Bong Joon-ho and his deft had with the central narrative. At its core this is a story of a young girl and her pet, expanded into an anti-capitalist fable that ultimately meets somewhere in the proverbial middle with one of the year’s most moving final acts. This is a bravura piece of filmmaking that packs the exact emotional punch one would hope would follow a two hour epic fable like the one Joon-ho has crafted here, and some of the film’s action set pieces that mark the preceding moments are equally as skilled and well crafted. Cinematic in a way few films this summer season are or will be, Okja is a grand, beautifully made and completely scattershot epic that is the type of captivating mess that we don’t quite see these days. Films don’t get this deeply weird without being both worth your time, and from the mind of an absolute master filmmaker.