Every summer, the film world becomes inundated with film after film taking their inspiration from various bits of fiction from the realm of comic books and graphic novels. Be it caped crusaders or a certain universe of Gods, wealthy playboys and green scientists in need of an anger management session or two, comic book films are about as common nowadays as romantic comedies or pretentious and morose independent dramas. However, every so often a film comes through that pipeline that attempts to be something greater. Something aesthetically rewarding. Something intellectually stimulating. Something more.

Too bad Snowpiercer isn’t quite that film. 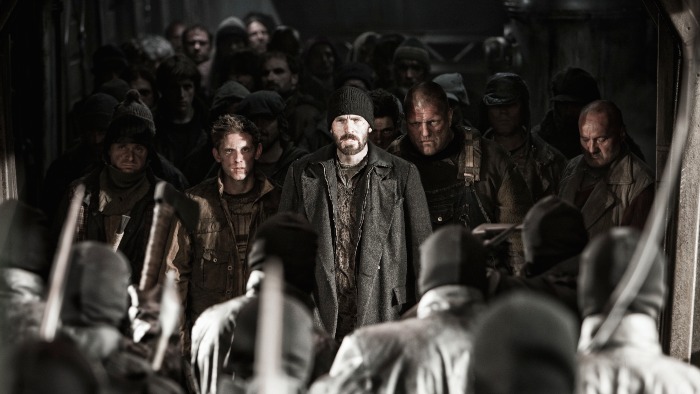 From director Bong Joon-ho comes this adaptation of the French graphic novel named Le Transperceneige, a beautiful piece of post-apocalyptic science-fiction social commentary from writers Benjamin Legrand and Jacques Loeb. Set after the end of the world, the film finds  the remaining population of this planet housed within the walls of a large train sped forward by its perpetual motion engine, a divine entity in the eyes of the population. However, 17 years after the end of the world the lowest class, the tail of the train, has reached their breaking point. Led by a man named Curtis (Chris Evans, in a decidedly less charismatic and bewilderingly dull lead performance), we watch as this man and his new revolution attempt to transcend, and ultimately shatter, the train’s “pre-determined” class structure, in what is one of the year’s most talked about feature films and Bong Joon-ho’s English language debut.

And yet, it never quite reaches the level of hype that has been synonymous with this film since it began its theatrical run. 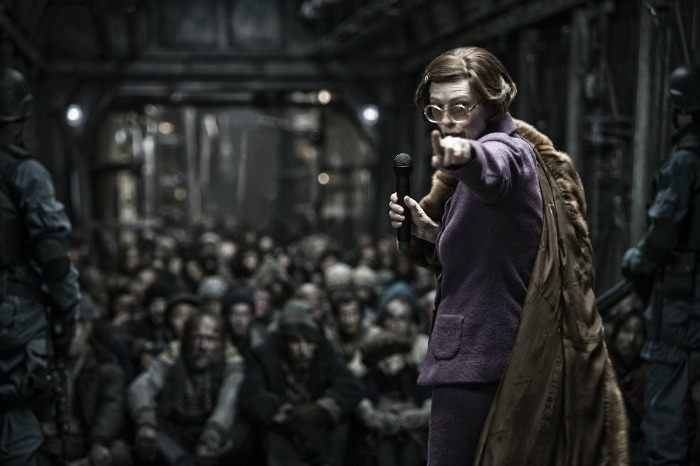 Thankfully, Bong Joon-ho’s hands are all over the film. Best known for features like The Host, Joon-ho has become best known for his ability to blend drama and comedy in a way and with such confidence that his pictures feel entirely his own. Snowpiercer is no different. While the themes here are brutally superficial and not to be spoken about lightly as the characters don’t have any fear discussing them openly, the comedy here is subtle and dry, and ultimately extremely potent. The film comes alive when Tilda Swinton comes on the screen, and even during a handful of the beautiful action set pieces start, they go about their business with an uncanny ability to interject humor directly into each set pieces DNA.

Much talk surrounding the film has been based around the idea of the distributing Weinstein Company took to their patented method of snatching a film out of an auteur’s hands and cutting it to pieces. However, that’s not the case here. With Bong Joon-ho’s tonally blend fully intact here, so is his beautiful direction, particularly some gorgeous and wonderfully choreographed action beats. The film is  photographed by Hong Kyung-pyo, and while it’s very much a monotonous picture visually, the differences that do arise as the characters make their way from one end of the train to the other really add to the thematic core of the film. It’s a beautiful film, but one that never really shakes free of the science-fiction post-apocalyptic genre that it owes so much to.

It also doesn’t help that it’s about as subtle as a sledgehammer to the throat.

Written by Joon-ho and Kelly Masterson, the film at its very best utilizes the theology background of Masterson, hinting at a film that is less about class structure than the premise would have you imagine. However, with as heavy a hand as one would expect from a science-fiction feature of this nature, any of the interesting religious subtext found here is drowned out by blunt and superficial discussion of class structure and the rich’s attempt at killing off, ostensibly, the poor under the guise of keeping “social order.” Throughout the film we hear a handful of characters spout off the same collection of ideas and concepts ultimately turning the film into a bland and underwhelming attempt at social commentary, with very little breaking it away from any of the other current sci-fi features making the rounds.

The acting here isn’t much better. Evans is, as mentioned above, nearly unwatchable as Curtis, a supposed leader that is so void in charisma that in the film’s final act, when the emotion begins to reach its melodramatic heights, he is so lacking in conviction that it’s almost comedic. Swinton steals the show here as what is best described as our villain’s right hand, a role that she absolutely eats up. Kang-ho Song, a name and face many Bong Joon-ho fans will remember from pictures like The Host, is fine here as a drug addict who is woken up from a deep sleep to help break through a series of gates he had a hand in building, and while he’s only in a brief part of the film, Jamie Bell is a welcome loose cannon that is sorely missed as the film goes forward.

Led by a void of charisma in the form of Chris Evans’ lead performance, a performance as a character that is told to be the leader of the entire lower class population of the world yet never gets anything close to an emotional moment out of anyone viewing the film, Snowpiercer is a fine and serviceable science-fiction film that is far from the hype would have you think. One of the year’s bigger disappointments, Bong Joon-ho’s latest is worth seeing if only for a handful of intriguing action beats, but is a shockingly forgettable sci-fi epic.

(Note from the editor: Ryan loved this movie, so please, direct all complaints to Josh)