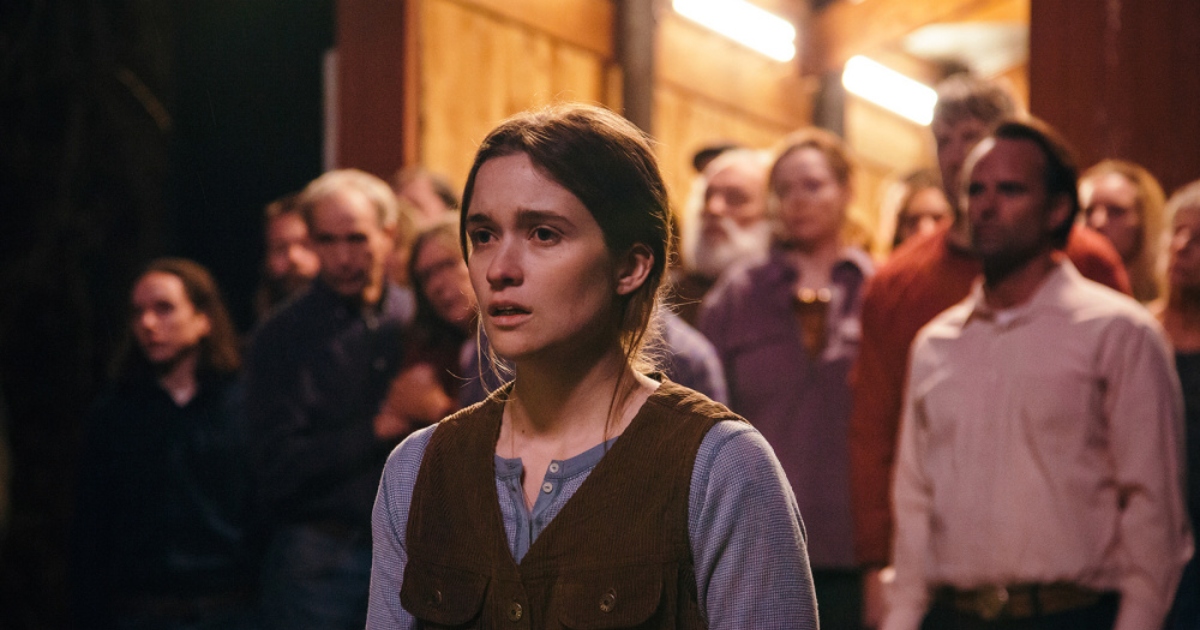 It may still be the summer, but with the hotly anticipated follow-up to 2017’s It arriving in theaters in about a month and Scary Stories To Tell In The Dark beating it there by a few weeks, the end of summer 2019 is about to get a bit more terrifying.

A horror/thriller that may go relatively undervalued while being positioned in the shadow of those more big-budget work is a captivating, if oddly misshapen Appalachian Gothic tale entitled Them That Follow. From writer-directors Britt Poulton and Dan Madison Savage, Them That Follow introduces viewers to Mara (Alice Englert), a beautiful young woman who is just days away from her wedding day. Part of a deeply devout and fundamental Pentecostal church, her father Pastor Lemuel Childs (Walton Goggins) isn’t your typical preacher, instead embodying the type of fire and brimstone, speaking-in-tongues type force of nature that at once oozes charisma and yet you don’t feel comfortable being in a room with him on your own.

Augie (Thomas Mann) is a former flame of hers who, as seen in the opening (what we discover is later a) flashback, once had a close connection with Mara until the two splintered from one another, with Augie jettisoning himself from the church. Now engaged to Garret (Lewis Pullman), Mara appears to be settling in, resigning herself to a life of gendered servitude in a generationally stunted, enclosed Appalachian society. That is, until Augie’s mother Hope (Oscar winner Olivia Colman) discovers something that forever changes the lives of these characters and the atmosphere of the film they’re living within.

A confidently made picture, Them That Follow is a tale of two films. Opening itself up as what appears to be a rudimentary coming of age film about the push and pull of a society generations behind the world they shelter themselves from, the film broadly portrays the battles between the devout and the secular in a way that feels thin and frustratingly maudlin. Snake imagery fills this work, playing as its strongest bringer of narrative tension while also playing as a compelling (if a bit simple) metaphor for the unease felt within each and every frame. There’s a sense of despair to these first 45-ish minutes that’s not reductive in any way, instead playing across the faces of each performer in a way that’s subtle and shockingly nuanced for this type of backwoods thriller.

However, about half-way through this briskly paced thriller secrets are revealed and what was once a subtle, if a bit simple, drama becomes as tense and unsettling a body horror film as you’ll see all year. After Augie is bitten by a rattlesnake after returning to the church he once fled from, Them That Follow ramps up the tension and brings into the light the film’s fascination not just with this region of America and the poverty they seem to be resigned to, but the type of spiritual belief that leads one to that resignation. It’s a world where the patriarchy has yet to crumble and science is as good as satanism, a world where snakes are seen as healers of the mind, body and soul, just like Mark 16:18 would have these parishioners believe. Or, that very same snake can damn the wicked to a death unlike any other.

Despite this uneven narrative, Them That Follow is an expertly crafted picture. Each performance is textured and despite having the potential to make villains out of these believers, the screenplay is much too wise and much too nuanced to have anything but empathy for these men and women, even the snake oil preacher. Colman steals the show as Hope, proving that she is very much one of today’s great actresses, and her chemistry with the young men and women that come into her character’s home is uneasy and kinetic. Her character is what people like Mara will grow up into, and to see the same sense of resignation begin to settle in on the face of Engler is absolutely heartbreaking and strangely captivating. The men here are also quite good, with Goggins chewing up each and every inch of the scenery, and a subdued Jim Gaffigan coming in for some much needed quiet subtlety near the film’s conclusion. Mann’s impressive as the sinner coming to repent, which is opposite Pullman’s Garret, a seemingly pious man with a sinner’s soul. A film about fundamental faith and its poisonous nature, Them That Follow is a much-needed change of pace from this loud summer movie season.