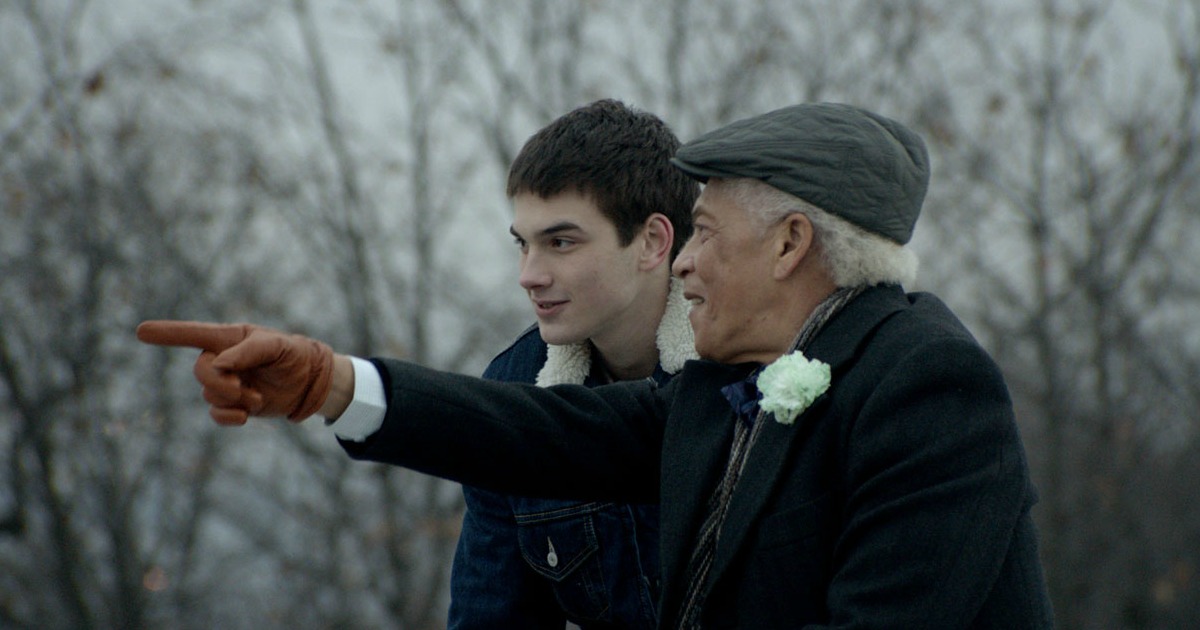 Tenderness isn’t something one often relates back to a filmmaker like Bruce LaBruce. Canadian raconteur and independent darling, LaBruce has taken to such areas of society as the pornography industry (Super 8 1/2) and gay hustlers in Hollywood (Hustler White) for his pictures, all while becoming one of indie cinema’s most intriguing “punk” artists. However, his latest may not only be his best work to date, but it also shows a softening of the director’s edges, which may leave many of his storied acolytes craving for a return to form, while showing that with age comes a leap in maturity.

Entitled Gerontophilia, LaBruce looks at the world of Lake, an 18-year-old who discovers that he has an attraction to a very distinct set of people. After starting a job at a local assisted-living facility, he begins drawing the population of the facility, and through this meets one Mr. Peabody. Not a fan of the facility’s penchant for over medicating the clients, Lake tries to clean his new romantic interest off his medication, with the hopes of breaking him free of this life and taking him to the ocean like he so desperately dreams of doing. The stuff of a John Waters film or something more seedy, the beauty inside of this picture is not only the bluntness of the story being told, but the heart and soul that seeps out of every moment here.

For a filmmaker known more as a provocateur than an actual craftsman, LaBruce is far and away the film’s biggest star. Admittedly crafting a film that can veer into the world of sentimentality occasionally, LaBruce’s film is beautifully made. Rarely would it ever be cause for celebration that a truly independent artist moves into a mainstream realm, but here it’s not only something to applaud, but it will hopefully be the start of a new age in the filmmaker’s career. The photography is gorgeous, giving the film a wintery blue tint to it, perfect for not only the narrative itself, but fitting of its setting.

LaBruce’s camera is also of note here. While taking a relatively mainstream approach to its storytelling, there are moments where it comes to absolute life. The romantic sequences betwen the two central lovers here are richly photographed, and the one sex scene may seem like it would be exploitative, but instead it is lush, tender and full of heart and soul. This is a film that follows that model. A softly lit picture with an enormous heart and a brazen sense of humor, LaBruce’s latest film is arguably his greatest piece of work yet. And it also helps that the core performances are equally as superb.

Led by Pier-Gabriel Lajoie as Lake, this is a film that is truly driven by the core performances. Lajoie is a revelation here. Easy to find a sadness in this type of character, there is an energy to his performance, a fire behind his eyes that turns this into something far greater. A youthful vitality and life, Lajoie’s performance is rich and in many ways heartbreakingly human. Walter Borden plays his elderly lover, and his performance is just as wonderfully toned. Far more comedic and light hearted, there’s also a depth to his character, as his life after discovering that he’s gay was turned upside down. There’s a melancholic vibrance to each word that really helps define this film’s tone and atmosphere. Katie Boland rounds out the main cast, as Lake’s girlfriend Desiree, and their interactions are just as moving and resonant.

Overall, while the film is a mainstream turn for LaBruce, a change in mood for a filmmaker who defines the phrase punk-rock auteur, it’s also a rich and more human turn. If this marks a new page in LaBruce’s career, hopefully it is one we stay on for a long time.

Gerontophilia opens May 1 in New York at the Village East 7.