It isn’t rare for a foreign language film to have a delayed theatrical release here in the states. Some films play the festival circuit, and then the following year, or two in the case of smaller pictures, arrive stateside for US audiences to consume. However, occasionally a film comes along and takes over a decade to hit this part of the world. It’s rare, but it does happen, just ask Jean Pierre-Melville and his beloved film Army Of Shadows. Arriving stateside almost 40 years after it’s original release, the film ultimately arrived on numerous year end critics lists, and has become seen as one of the director’s greatest achievements.

And now, this weekend sees the release of a film from Chris Marker that has seen a similar release schedule.

Initially released in 1997, Marker’s breathtaking feature film Level Five has finally seen its theatrical debut here in the US, and while it is in many ways an obtuse and dense look at the birth of the internet culture, the film is even more so a breathlessly relevant and still pertinent time capsule from an age that forever changed the world.

The picture introduces us to a woman named Laura (Catherine Belkhodja), a programmer in the midst of crafting a video game based on the Battle Of Okinawa. With WWII weighing heavily on the mind of this film and director Marker, the film also has cinema on its mind, with various references filling the film. With nods to everything from Otto Preminger’s Laura to Alain Resnais’ masterpiece Hiroshima Mon Amour (even director Nagisa Oshima ends up showing up in a cameo role), the film is a whirlwind of worldly themes that unlike its aesthetic feel brazenly prescient even 18 years after the film’s initial release.

Visually, the film is rough around the edges. Newly restored here, the film is a raw and in many ways hypnotic piece of work, that despite having a grainy and low-fi sense of style, falls directly in line with Marker’s output from this period of his career. Mixing archival footage shot by Marker during the 1985 commemoration of the Battle Of Okinawa and various other archival segments, the main thrust of the narrative comes in the form of philosophical musings from our lead as she “logs in” to the computer system she uses to craft her game. It’s a methodically paced picture that uses the grainy low-fi direction and photography to give the film a decidedly analog feel in the age of the birth of digital.

The film feels much like the films of one Jean-Luc Godard, or at least the films he was churning out during this time period, but it is ultimately very much rooted in Marker’s patented aesthetic. Blending fiction, non-fiction and everything in between, the film is a tough nut to crack for those new to the work of Chris Marker, but is also in many ways a perfect starting point for those very same people. Ostensibly about identity, the lasting horrors of war and the birth of the digital age, the film is a lengthy watch, clocking in at nearly two hours, but is perfect, distilled Chris Marker. Thematically, the film covers much of the same ground that Marker would forever be interested in, particularly the idea of identity. Visually, the mixture of archival footage and source “interview” sequences is right up the director’s alley. And structurally, this type of essay picture is exactly the piece of art that Marker would spend much of his career perfecting.

Overall, as it nears its 20th anniversary, Chris Marker’s fantastic 1996 release Level Five is now finally set to make its debut in these United States, and while the 18 years may seem like it will mark a film that feels dated, this is a remarkably pertinent and relevant piece of work even nearing the end of its second decade of existence. A near masterpiece, this film truly is. 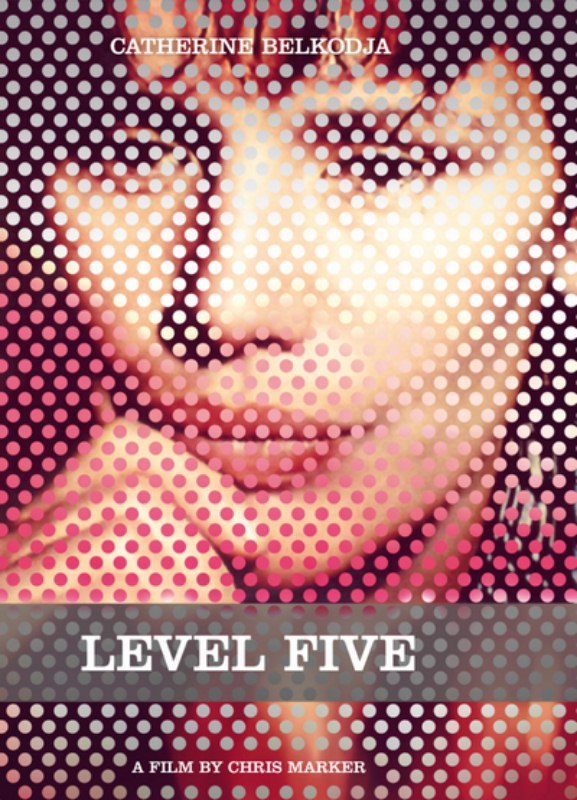