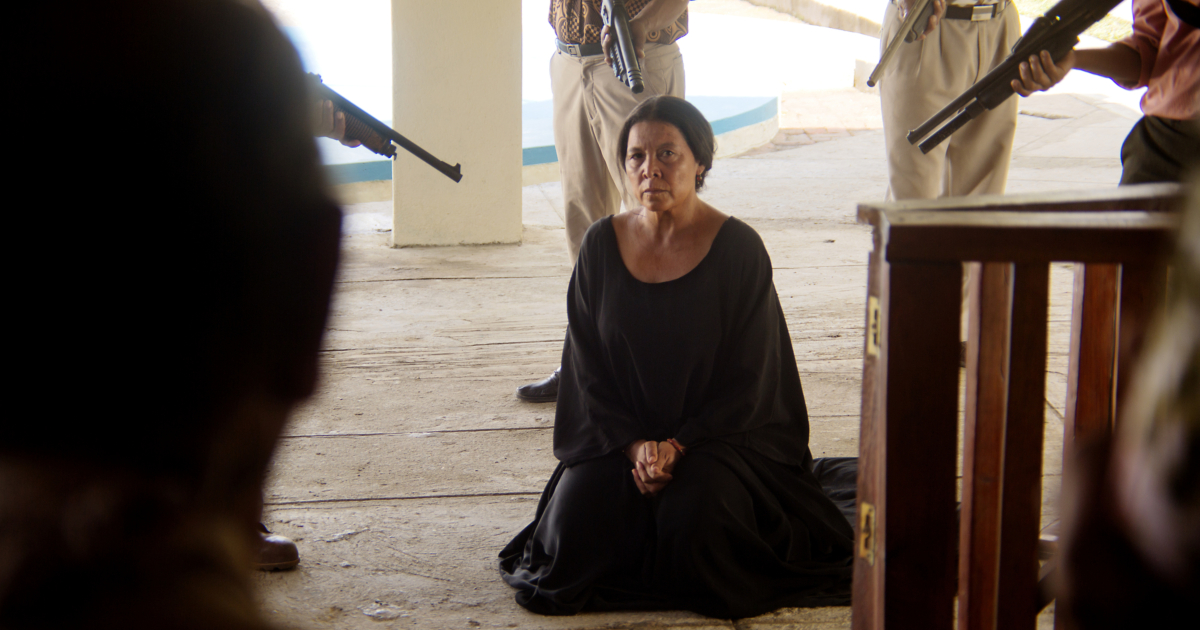 Despite producing films in 2004 and 2009, it was not until 2015 that director Ciro Guerra launched into the global spotlight. Following the films Wandering Shadows and The Wind Journeys, Guerra became something of a household name in ‘15 with his Oscar-nominated masterpiece Embrace of the Serpent. Now, some four years after that film’s much-lauded debut, Guerra has returned with another Oscar-shortlisted film, a drug epic unlike anything in theaters today.

Entitled Birds of Passage, the film is a co-directing effort with his longtime producing partner Cristina Gallego, and is a thrillingly told epic, that’s part genre experiment and part political statement.

The film has a much larger scope than Guerra’s previous films, attempting to paint a portrait of the Colombian drug trade as seen through a small village of indigenous Wayuu people. Rapayet (Jose Acosta) is a young man torn between two worlds and two ideals. Does he embrace the burgeoning drug business in hopes of gaining power within his village and the surrounding reason or does he stick to traditional roles, reinforcing traditions handed down through generations? Deciding on the former, Rapayet goes not only against the wishes of his family but what appear to be the wishes of some greater, higher power (the amount of ominous symbolism here is one of the film’s great visual flourishes) only to get caught in a vicious world full of existential terror.

While the drug trade has been rather fruitful ground for genre cinema to explore numerous tropes, there are few films that are as quite as breathtakingly shot or as intellectually stimulating as Guerra’s latest film. Teaming up once again with longtime cinematographer David Gallego, this is a far cry from Serpent aesthetically, yet not any less awe-inspiring. Shot in glorious color, Birds loses some of Serpent’s almost nightmarish otherworldliness, yet never loses sight of the spirituality of the traditional region he’s steeped within. Often drawing comparisons to something like Netflix’s Narcos, Birds is a lyrically told drama, with Guerra and Gallego’s direction coming across as nuanced and assured. There are brief flourishes, such as cuts to ominous footage of various animals, yet there’s a matter-of-factness that feels like an evolutionary step for the directing team, as much of the film is told in static, precise shots that very rarely leap into the realm of surrealism like Guerra’s previous film. We see long shots of crickets and birds throughout the film, never once mentioned upon by anyone within the film or seemingly the directors themselves. These edits are as unsettling as they are foreboding, turning what is more or less a genre exercise into something much more primordial.

In many ways feeling like a spin on the Western genre, Birds doesn’t give viewers a typical white hat/black hat type battle for the soul of a small village. Instead, the filmmakers take this pulp-like story and bring it to life as a work of real socio-political anger. At its core, the film is a scathing rumination on both colonialism and capitalism, as the film’s primary drama begins with the introduction of Western capitalism into this traditional society. It’s the same push and pull between tradition and evolution that the Western genre has always focused on, yet through Guerra and Gallego’s lens, it evolves into something both mythical and entirely lived in.

However, the real star here is the lead performer. Relatively unknown, Acosta is an absolute revelation in this picture, perfectly embodying the role of a man caught between two worlds. It’s an evolutionary performance, one that is rightly quiet and steely, yet oddly charismatic and watchable. There’s a nuance to each of his decisions that gives the film a great sense of naturalism and realism, something much needed for the broader themes to really sink in. It could easily have been a thankless, almost cipher-like performance, yet Acosta takes this role and runs with it, helping ground the film when it does decide to leap into slightly more magical realist waters.

As far as a follow up to an Oscar nominee goes, Birds of Passage is as good as they come. Changing pace from the aforementioned Embrace of the Serpent, Guerra and Gallego have crafted a nuanced depiction of capitalism’s corruptive DNA and a film that subverts expectations at every turn.