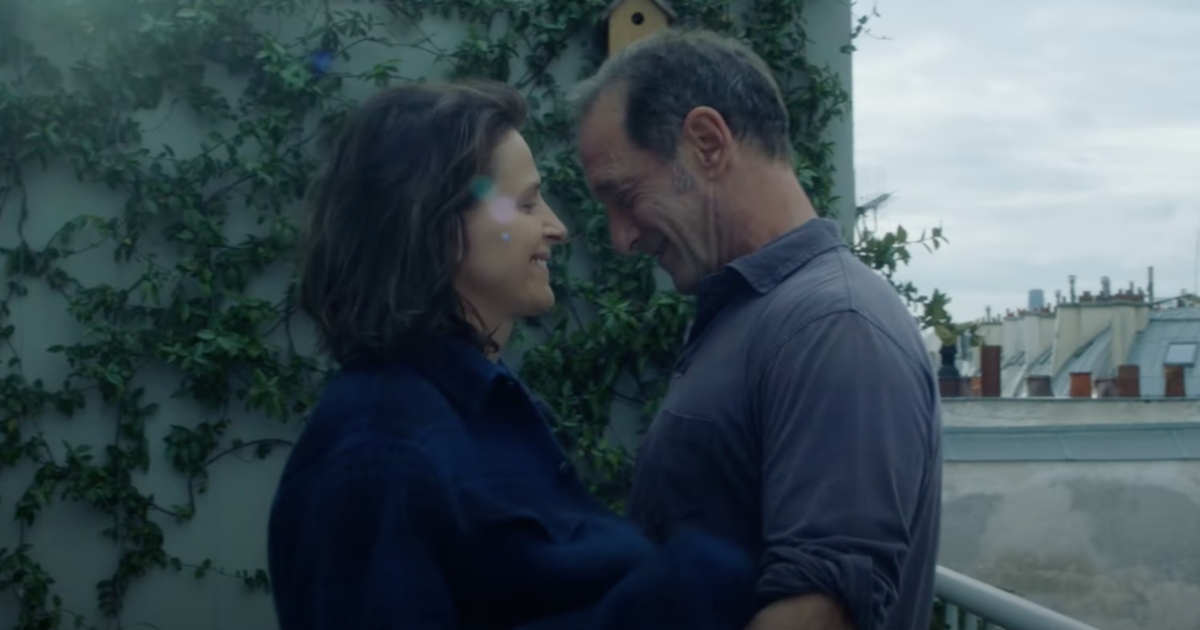 Few director/actor pairs have had a more exciting recent run than that of Claire Denis and actress Juliette Binoche. Through films like the underrated Let The Sunshine In and the beloved science-fiction stunner High Life, the two have formed what’s proven to be a fruitful partnership.

So when a new film featuring both artists hits theaters, it’s something to rejoice. Thankfully, Both Sides of the Blade not only lives up to that recent pedigree, but exceeds all expectations.

Binoche stars here as Sara, one half of a couple who, despite having been together for a decade now, are on the precipice of a crisis that threatens to tear them apart. Early on in the film, viewers become privy to the couple in their most intimate moments, watching as Sara and Jean (played by the brilliant Vincent Lindon) appear to be very much still in the blissful phase of their marriage. They live in a beautiful apartment and can’t keep their hands off one another, with even the smallest of glances or smiles proving that the two are still very much in love. While not shying away from the film’s setting being right in the middle of the COVID-19 pandemic, there seems to be nothing that could break these two from their lovespell.

That is, save for a returning past flame. Regret and disappointment rear their ugly heads with the return of Francois (Gregoire Colin), a former colleague of Jean’s and a past lover of Sara’s, with those roles being the ones he appears to be interested in once re-entering the couple’s lives. You see, Jean was incarcerated for a crime we learn little about, which has not only put a strain on his relationship with his estranged son Marcus (Issa Perica) but also made it nearly impossible for him to hold a steady job. That is until Francois offers him a job as a rugby scout for his talent agency.
As these relationships ebb and flow, the melodrama increases, with Sara and Francois picking up seemingly right where they last left off, creating what is one of recent cinema’s most engrossing and rightly erotic love triangles. Proving once again to be a master of shooting the human body, Denis’ camera is an erotically charged one, turning long sequences of bodies touching, eyes making contact and gestures being registered into moments of profound intimacy. Very much rooted in the tradition of French bourgeois melodrama, Denis subverts these tropes at every moment, embracing the quiet naturalism of her performers and enveloping the proceedings in a cloud of regret and doubt.

However, this isn’t just an accomplished bit of directing. All would be for naught if the performances here weren’t the top shelf turns that Denis was able to get out of her impressive cast. Binoche is a house on fire here, playing as the perfect lead for this quiet melodrama. As sexy as she’s ever been, Binoche embraces the intimacy of the story and is able to breathe genuine humanity into arch lines like her reaction to Lindon’s Jean seeing her kiss Marcus. In any other film with any other actors the line “you saw a fragment of a movement” would lead to little more than groans filling the theater. However, Binoche is able to give each line reading the right modulating of tone that allows for her to ebb between defensiveness and pained remorse with ease. Lindon, on the otherhand, gives a deeply physical performance, proving once again that there may be no better face in film than his. Telling the entire story through small, modulated changes in mood, Lindon’s face tells every beat of the story, where his characters stubborn insularity refuses. Finally we have Gregorie Colin, who gives a superb, if slightly one note, performance as Francois, the suave talent agent who comes back in an attempt to sweep a past love off her feet. Its this dynamic that turns Both Sides of The Blade into a near masterpiece.

I say “near” as the film isn’t without some minor problems. One’s milage may vary with regards to the plots that happen just on the periphery, particularly that of the relationship between Jean and his son Marcus. Marcus, who is bi-racial, is having trouble at school, and finds this bleeding over into his relationship with his father. Race and class issues are discussed, with Denis making overtures to the larger narrative about freedom and the fluidity of life, that never take away from the larger story but feel strangely tacked on for a director who has never shied away from those issues. The scenes these two share are, in their own right, properly beautiful and poignant, but at nearly two hours in length, these scenes can come across as jarring and arguably out of place.