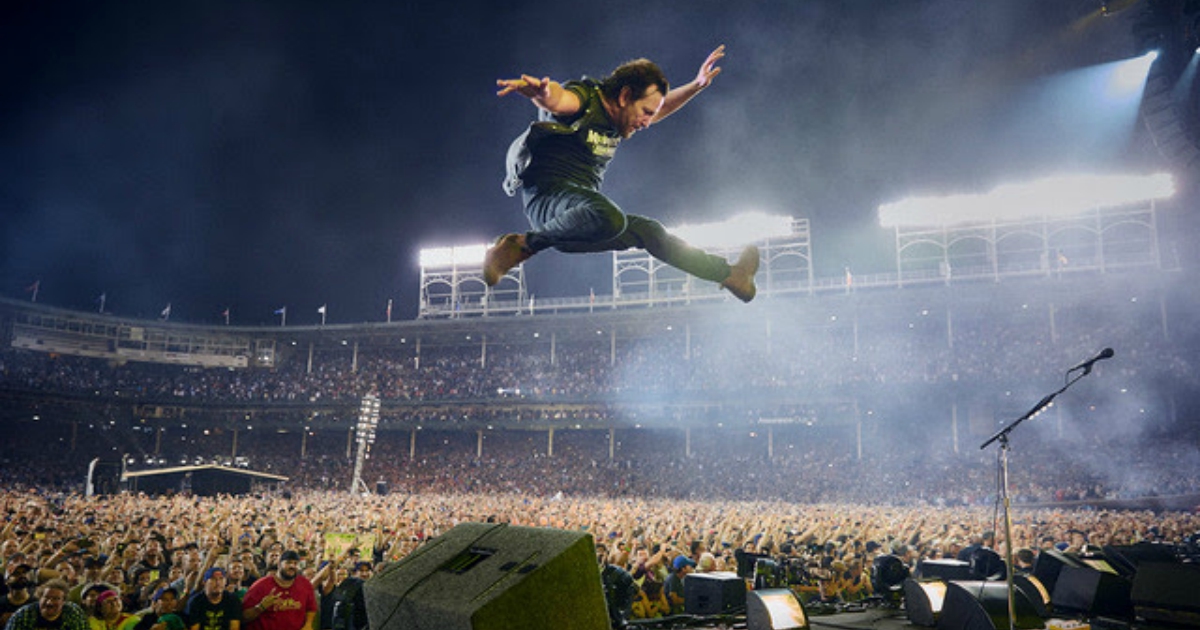 Apparently concert documentaries are having a bit of a moment. Between the recent release of the Criterion Collection DVD and Blu-ray of Murray Lerner’s Festival and the theatrical run of films like May It Last, the last month or so has seen a number of concert documentaries thrust back into the spotlight. Hell, even the rarely seen Prince documentary Sign O’ The Times recently got a new lease on life thanks to a streaming debut thanks to Showtime. All of this is to say that fans of music-centric documentaries are in the middle of a brief golden age.

The latest addition to this list of documentaries chronicling a band, a performance or a series of performances is Let’s Play Two: Pearl Jam Live At Wrigley Field. As the title would have you believe, the film shines a light on two vastly different worlds, rock music and professional baseball. Chronicling a performance by Pearl Jam at Wrigley Field in 2016, the film is set opposite the historic season had by Wrigley’s own Chicago Cubs, which saw them finally take home a championship, breaking a century-plus long “curse.” Blending performance footage with interviews ranging from lead singer Eddie Vedder to Cubs GM Theo Epstein, Let’s Play Two enjoyably weaves together a story that follows this baseball season as well as the history of Pearl Jam and their connection to Chicago and their most iconic baseball squad.

Let’s Play Two is a servicable piece of filmmaking. Directed by Danny Clinch, the film is a prototypical concert documentary, at least in its form. The photography here is crisp and clean, and the editing is quite classical. The picture clocks in at a pinch over two hours, and while the blend of interview and performance is almost comically cliche, there is a sincerity that makes the proceedings quite engaging. At once a straight forward concert documentary and also one of those Season In Review films you get with a Sports Illustrated subscription, Clinch’s film is derivative, yet hard to turn away from.

And that’s simply because of the sheer force of will that is Pearl Jam and their faithful leader. Vedder is magnetic in front of the camera and on stage. The performance sequences here are absolutely captivating (if a bit overbearing given the film’s gawdy run time) and have a looseness that fits the jam band stylings of modern day Pearl Jam. Despite being so very glossy a documentary in its photography, it never feels antiseptic or stuffy, which many films of this ilk do (see the above mentioned Avett Brothers documentary). Some broader context is given with regards to the Cubs and the importance of this recently earned world championship, which itself gives way to the film’s most emotional moments, such as an ode to the late Mr. Cub himself Ernie Banks (who coined the “let’s play two” that the film draws its name from) or a moving coda that marks the film’s conclusion. These sequences bring to life the personal connection between band and team, and ultimately give the viewer an emotional core to dig into. At two-plus hours, the film does overstay its welcome, but these deeply emotional sequences help bring the viewer back into the fray, and help elevate the film out of the ranks of your run-of-the-mill concert picture, and into something more worthy of note and your time.