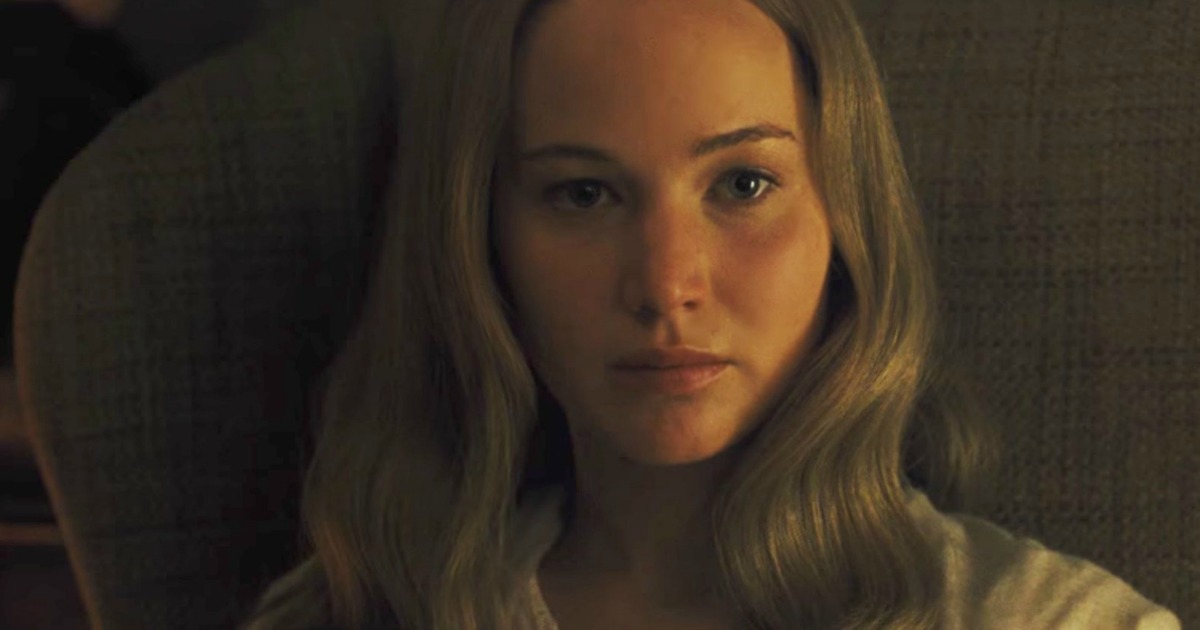 Darren Aronofsky is a fascinating film figure. Launching his career with then-beloved indie efforts Pi and Requiem For A Dream, the maximalist auteur has not only seen his style evolve from MTV-style fast edits and intense close ups to something more resembling a surreal-tinged neo-realism but also his critical stock plummet the way few filmmakers have. Be it the relative lukewarm response to his perplexing-yet-fascinating Noah or a revisionist distaste among critics for his early films heightened style, Aronofsky is a filmmaker that in many ways defies description.

And speaking of defying description, trying to describe Aronofsky’s latest film is about as hard as it gets.

Entitled mother!, Aronofsky turns from the biblical of his last film to the domestic space, introducing us to a character, played by Jennifer Lawrence, simply named Mother (never let it be said that Darren is a subtle filmmaker), the significant other of a beloved poet (Javier Bardem) who is currently suffering from a severe case of writer’s block. This seem relatively normal until an ill doctor arrives on their doorstep, looking for a place to rest his head. In their area for research, he enters their domestic space, and from here things devolve into something that’s at once utterly straight-forward and yet hard to describe without spoiling one’s experience.

I say it’s straight-forward, simply because that while Aronofsky’s film is rightly obtuse in its approach, the emotions and themes at the picture’s center are shockingly universal. Where universality usually comes from cinema’s ability to get specific with regards to its narrative, Aronofsky goes the route of capital T theater, giving us allegory around every corner. The film is at once a story of a self absorbed artist and his desire for adoration, and also a story of the domestic space under existential attack. Aronofsky seems as interested in the artist’s attempt to overcome writer’s block as he does the utterly destructive nature of relationships, and come the film’s final act, mother! evolves into what can best be described as melodrama’s final form, if you will. We see as the world surrounding Lawrence’s Mother character and her poet beau completely collapse, a world built by her upon his past grief. It’s a film of profound anger and fueled by a selfishness on one half of this relationship’s shoulders that to call it anything other than a domestic melodrama would be to miss the point.

Sure, Darren Aronofsky isn’t riffing squarely on the type of melodrama one usually sees. More influenced by Polanski’s Repulsion than Rosemary’s Baby, Aronofsky turns in arguably his most muscular work to date, a film that may be less celestial than a film like The Fountain (still his best film), yet feels much darker and more angry. Gorgeously composed, the film is shot primarily in longer takes that focus squarely on the physicality of our performers. Similar in many ways to silent cinema not only in the grand nature of its allegory but also in the use of bodies in space, mother! is as much about the way people relate to one another emotionally as it is the way we relate to the spaces that we try to create for ourselves. The final act is almost entirely told in a surrealist nightmare-like sequence that is the existential nightmare of anyone who has ever tried to create a safe space within their domestic dwellings. It’s perverse and absolutely problematic, but it’s also devastating and utterly moving.

The photography here is quite beautiful, giving a weirdly tactile sense of realism to a film that’s entirely absurdist in its scale. Post-The Fountain, Aronofsky has seen his style shift from music-video style energy to something resembling a more nightmarish Dardenne Brothers-style realism. He’s still every bit a maximalist, but his style has gone from extreme close ups and time lapse sequences to surreal imagery played completely straight. We don’t see much subtlety here, particularly in his filmmaking, yet instead of feeling like one is being beaten over the head with these images, they play on almost primal emotions that are rich, powerful and startling. There are hints, for example, that this is a cyclical process for Bardem’s Poet, of being almost a vampire-like partner in any given relationship. But instead of just seeing his need for adoration from waves of fans, we see images that sit far deeper in a person’s psyche. Something as simple as a proto-mythic gemstone or a heart in a toilet, these are small totems that Aronofsky seems fascinated by, and these are what ultimately makes the film a bombastic but devastatingly moving effort.

And yes, the performances are uniformly great. This is arguably Jennifer Lawrence’s greatest work to date, particularly in the above mentioned final act. Melodrama is the name of the game here, and Lawrence is rightly heightened which is a welcome change of pace for the actress. Her character is put through the ringer with the final sequences verging into the hashtag problematic realm, which is very much an issue some may have with the film. Bardem’s Poet is a shit bag and the type of petulant, fragile masculinity that fuels him is exciting to see the otherwise confident and bravado-driven Bardem work with. The film rests primarily on these two actors and their rather broad shoulders, and they’re more than up to the job. Simply put, this is a film that one won’t soon forget. And that’s an understatement.