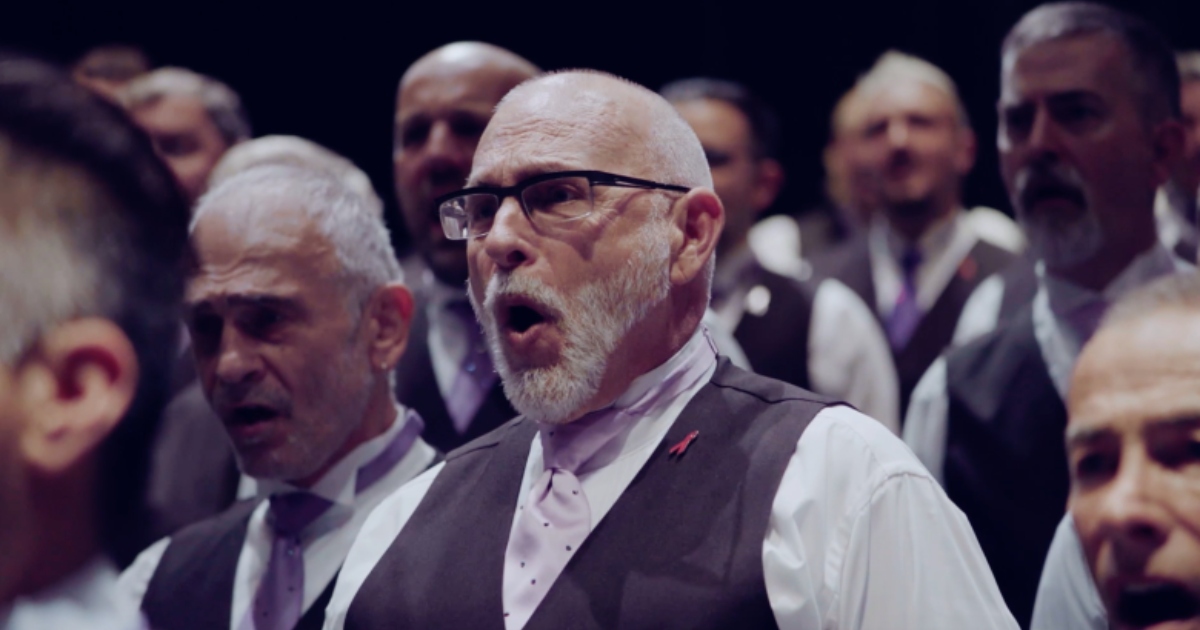 With most modern issue-based documentaries, the filmmakers pair facts, statistics or true life stories with a dour atmosphere and something vaguely comparable to pure pessimism. That’s not a qualitative statement, many of these films deserve the antagonistic tone and completely earn the complicated relationship one may have with the topic. However, when a film like Gay Chorus Deep South crops up, pairing human stories with an even slightly optimistic look at the world that surrounds us, it becomes almost rapturous.

Gay Chorus comes from director David Charles Rodrigues and tells the story of members of the San Francisco Gay Men’s Chorus as they make their way through the proverbial Bible Belt, bringing their powerful performances to states like Mississippi, Tennessee and Alabama. Opening with some information about this region’s continued discrimination against LGBT people based on their “religious beliefs,” the very thesis of this tour is one of subversion and yet also one of genuine good, seeing these performers trying to bring about even the slightest bit of mind-changing through the very spiritual music that these bigots fall behind while denying them their human rights.

More specifically, the film follows a handful of members who find this tour set against moments of ostensible crisis. Of course the film introduces viewers to Tim Seelig, the leader of the group who was born and raised in a Baptist home, only to find himself in the closet and married to a woman and a father of two children. The church, he’d go on to say in the film, subsequently “left no stone unturned to ruin my life,” with Tim coming out, ultimately getting him fired from his jobs and left more or less friend-less despite a congregation numbering in the tens-of-thousands.

Then there is Jimmy White, a man facing cancer in the face, fighting it while trying to get back in touch with his father who rejected him upon his coming out. Jimmy’s story is the most classically moving, with his father sitting through one of the group’s performances only to, by the time a drag rendition of Patsy Cline’s iconic “She’s Got You” hits the stage, begins to break down his walls. There’s little broad melodrama here, instead finding Rodrigues far more interested in the small changes of heart that begin to lay ground work for the social evolution each person goes through as they discover that the world they live in is far more diverse than they believed it to be, and that that’s something to rejoice in instead of reject. A measured work in almost every way, Gay Chorus Deep South doesn’t so much play as a typical issue documentary, instead evolving into something of a travelogue type film.

The most thoughtful sequence involves Ashle Blow, a singer in transition, who has dinner with a couple that appear to be entirely inviting of the performer, yet there is an atmosphere to their hospitality that feels entirely false and infuriatingly performative. These ideas become literalized in the film during a conversation between Seelig and a pastor, but watching this type of perverse hospitality in action pairs the minor changes of heart that we see throughout the film with something truly toxic. It’s this type of mindset that leads to the bigoted “but I have a black friend” reply when one is called out for racism, and seeing it play out on camera is strangely captivating and endlessly frustrating.

Gorgeously shot and chock a block with engrossing performances (the aforementioned Patsy Cline segment is rapturous) Gay Chorus Deep South is a handsomely rendered, if maybe a bit thin (or simplistic may be a better word), look at a group of people trying to bring about change through music. It’s through this shared connection that true, if seemingly small in scale, change can be born and it’s that glimmer of hope and humanity that makes this film worth hunting down.