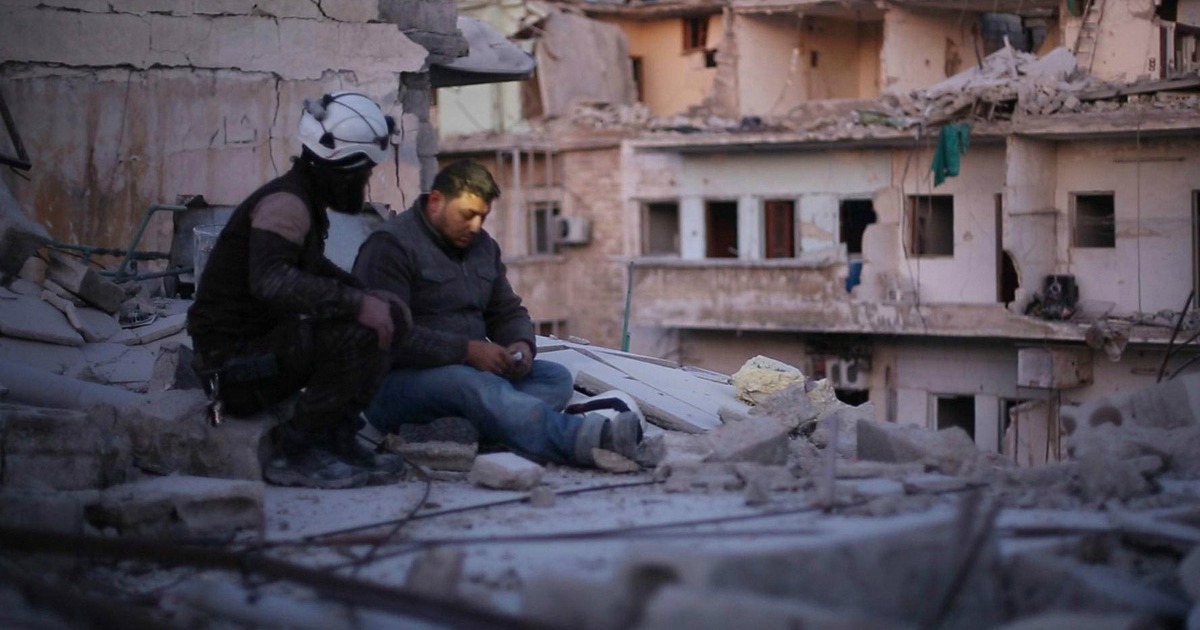 I tried to come up with a witty lede to begin this review. Be it a play on Gary Johnson’s now immortal “what is Aleppo” that would have been as insipid as that question is buffoonish or a spin on this film opening the same week as Marvel’s latest superhero film entry, nothing sounded quite right. Not because they didn’t fit the cliched style of these reviews, but because a film as potent and unshakable and moving as Feras Fayyad’s Last Men In Aleppo is simply beyond words.

Over the last few years, more and more filmmakers have delved headlong into the ongoing conflict that is engulfing Syria. Just this year there has been the superlative Cries From Syria, and everything from the Oscar-winning short film The White Helmets to Kirsten Johnson’s Cameraperson have, to various extents, discussed this global conflict. Yet, with more and more lives being lost daily, there is still much to do on the ground, and much to do abroad.

There lies Last Men In Aleppo. Drawing from the same inspiration as the above mentioned Academy Award winner, Fayyad’s film looks at the lives of various first responders who put their lives on the line to save those caught in the middle of the violence. Known as “White Helmets,” these volunteers dive head first into the rubble, responding to terrorist attacks throughout the region. For the film, we meet specifically three volunteers. At various stages in their own lives, the film introduces us to Khaled, Mahmoud and Subhi, three men who put their lives on the line to save those in distress. Searching destroyed buildings and rubble-covered streets for anyone they can find, these three and the group they volunteer for are the first line of humanity in the wake of utter chaos and unspeakable destruction.

To speak on this film on a level of normal critical discussion is almost impossible. Not because the film isn’t superbly crafted, it very much is. A typical fly-on-the-wall documentary, we the viewer become privy to moments both horrifying and beautiful, ranging from the sight of lifeless children caught in rubble to the building of a brand new pond. These scenes and their juxtaposition, as well as the rather profound musings on life and its real meaning, are handle with such dignity and humanity that, as a work of craft, it’s above reproach.

However, it’s also in these moments that the film becomes something that transcends the documentary form. Or maybe it is a definitive example of that form at its most pure and almost primordial? With little actual commentary on the events or the conflict, the film simply introduces us to three people, and lets their lives tell a story of human compassion in the face of complete anarchy. These aren’t forgettable images either. Unflinching in ways modern documentaries rarely are, the camera never wavers, but it also allows the viewer a chance to breath with these people as they themselves try to process and react to what they’ve just seen.

These moments are almost as profound as the scenes of bodies strewn across shattered rubble. While the sight of bodies broken is visceral in a nearly primal way, the sight of someone like Khaled Omar Harrah trying to come to grips with his want to help others and his want to keep his family safe is shattering. Maybe that’s because of what the film tells us of his ultimate fate, but these quieter moments of reflection and contemplation are not only an important moment for the viewer to reflect on what they’ve seen, but also for the subjects to respond to what they’ve just lived. Within each frame there’s a sense of deep humanity that, in a time where politicians bomb regions that they refuse to take refugees from, is frustrating and beautiful.

An absolute monument to both these volunteers and the humanity that they and the Syria Civil Defence show on a daily basis, Last Men In Aleppo is at once one of the year’s best documentaries and also a completely unforgettable piece of humane filmmaking.