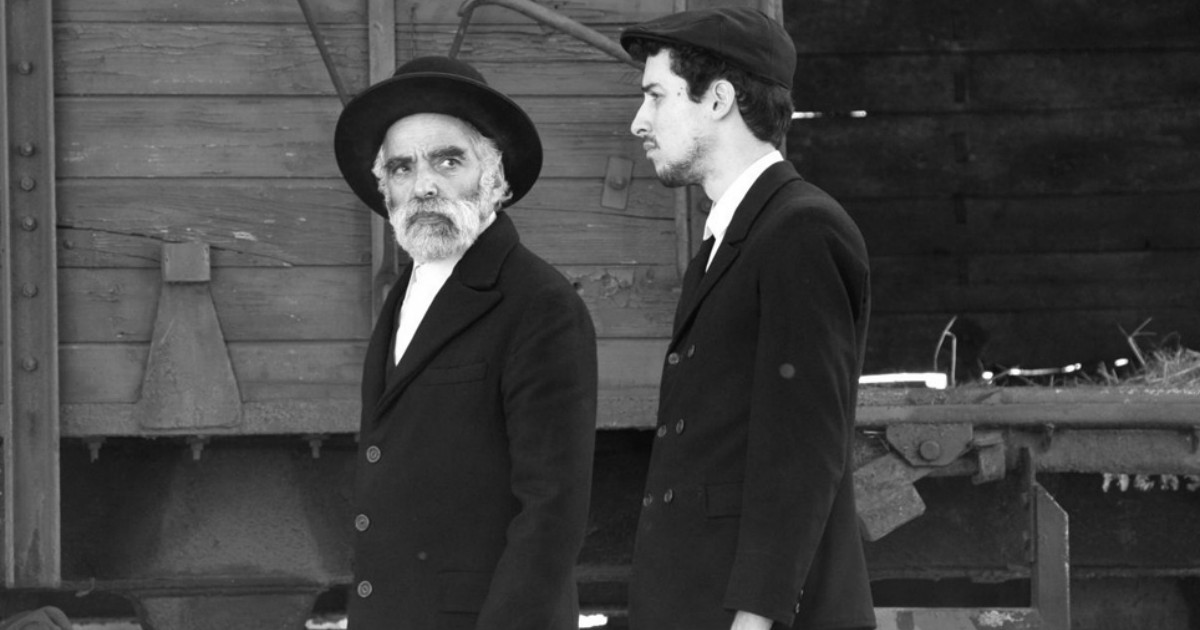 Despite being almost two decades into his film career, Hungarian filmmaker Ferenc Torok is a relatively unknown entity here in the US. The director’s sixth feature film, 1945 is now in theaters in New York City, and while it may not make many waves here during its theatrical engagement, it’s certainly one of the back end of 2017’s great surprises.

1945 has a relatively simplistic elevator pitch, given the depths that it ultimately reaches. Set one summer day during that fateful year, two Orthodox Jewish men arrive in a small Hungarian village just as the town is prepping for a rather important wedding. Finding the village less than welcoming, the two men deal with a town on the verge of a nervous breakdown in the closing moments of World War II. As the son of a village notary, Arpad (Bence Tasnadi), readies to marry a beautiful young peasant woman named Kisrozsi (Dora Sztarenki), the village receives the father-son pair (played by Ivan Angelus and Marcell Nagy) with tensions high. During the war, Hungary benefited greatly from the deportation of Jewish men, women and children from across the region, and these two men are that history made flesh and bone. Seeing them as outsiders, the villagers react to the men’s arrival in a myriad of ways, thus setting up the main crux of what is one of the more intriguing discoveries of world cinema this year.

1945 is an absolutely gorgeous motion picture. Shot in high contrast black and white to not only fit the type of classic cinema trappings that director Torok is toying with but to also match the film’s morality play narrative, 1945 is a wonderfully composed film, one of assured camera work and evocative framing. The film is a ground-level story, one whose narrative focus may be on a small Hungarian village, but out of this decidedly specific story comes broad themes. Each villager here has benefited in some way from the deportation of Jewish people just like the two that have arrived at the start of the film, and yet as each person we meet deals with that very fact we become more and more privy to different aspects of the human condition. Be it the man who oozes remorse almost instantaneously or the villager who turned a blind eye to the events taking place only to fight for what they’ve gained when facing the repercussions of their apathy, the film takes a relatively simple premise and turns it into a deftly told and quietly dense meditation on shared history and human nature.

And despite its dated title, there’s something to the idea of complicity in inhumanity that feels intensely pertinent. At the very heart of 1945 we have a film about the nature of complicity in the social sphere, something that couldn’t be more timely today. When the two men arrive in the village, those directly and indirectly responsible for their exile and the exile of millions of Jews just like them come face to face with their connection to one of humanity’s darkest moments. These villagers saw a chance for self gain, and sent men, women and children very likely to their death for this personal gain. Some handle their return with profound remorse, while some handle it with abrasiveness and even fear. It’s this level of thematic depth that the film finds its importance.

It’s also simply a tense motion picture. Torok’s film owes a great debt to the Western tradition, as we watch two outsiders arrive in a village in order to bring justice to the surroundings. While there are no guns and no real violence, the film is no less tense, driven by long takes and abrasive black and white photography. A quietly powerful score sets the tone for the proceedings, turning what should be a run of the mill WWII picture into something entirely its own. While the setting may be specifics may be different, 1945 is as much a Western picture as it is anything resembling a WWII drama. Performances are uniformly great, as well, making this one 2017 release that will hopefully find an audience, despite its modest release schedule.