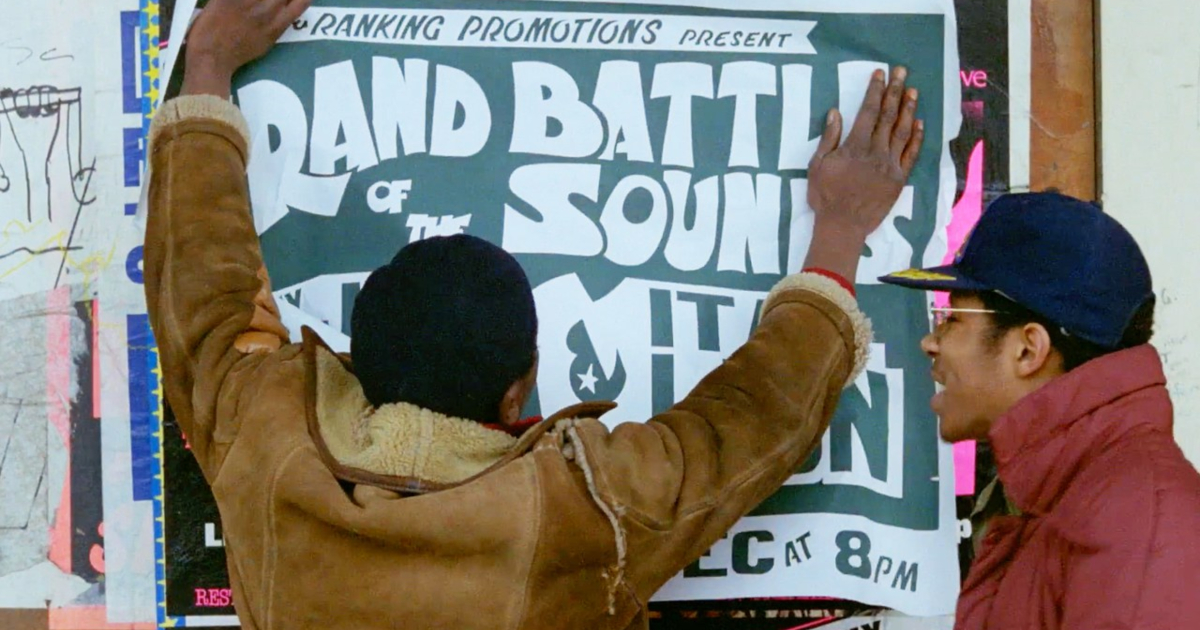 As access to films becomes more and more democratized, the need for new voices in the world of distribution is at an all-time high. Be it the biggest of trillion dollar studios or the smallest of niche labels, seeing what films go to what distribution house can ultimately allow one to have a more keen eye when going into a theater. That’s why when a new distributor hits the scene, their premiere release becomes quite noteworthy.

It’s all the more impressive when that debut film is one of the great discoveries of the repertory scene so far this still young year.
Pairing up with Kino Lorber for their first theatrical effort, the new distributor Seventy-Seven Films is making a hell of a splash with their debut, bringing to theaters for the first time in the United States one of the great undervalued dramas of the late 70s-early 80s. Entitled Babylon, this Franco Rosso-directed film was deemed “too controversial” by some critics following its debut at the 1980 Cannes Film Festival, and has been all but impossible to see in any real way since.

Directed by Rosso with a script from Quadrophina scribe Martin Stellman, Babylon tells the story of Blue (Brinsley Forde), a down on his luck reggae DJ simply doing his best to keep his head afloat day to day. We float in and out of interactions, all given an intense sense of naturalism thanks to the lively performances, especially from supporting performers like Archie Pool and Trevor Laird, portraying two of Blue’s friends. Through these interactions, Rosso thrusts the viewer head first into a world of racism and classism, a day-to-day existence that is unfathomably frustrating.

At first glance, the style of the film takes the viewer by the lapels. Shot by Oscar-winning cinematographer Chris Menges, the film takes the kitchen sink-style seen in British cinema of maybe a half generation before (Menges is probably best known among film nerds for shooting the groundbreaking drama Kes, so there’s a hint as to what to expect), and supplements it with a singular sense of vitality and energy almost from frame one. The film’s told primarily through subtitled Jamaican patois, which itself makes for a captivating experience, but Menges’ photography is richly textured and gives each frame a sense of urgency that’s paired thrillingly with the film’s central rumination on class and racial dynamics (which also couldn’t be more “of the moment” today).

It also helps that the score and overall soundtrack is as incredible a collection of music as you’ll see all year. Scored by The Slits’ Dennis Bovell, the film also features a collection of reggae and rock tracks from the likes of Aswad and Johnny Clarke, all setting an engrossing sonic landscape for this portrait of race in Thatcher-era London. The music feels incredibly of the time period, yet doesn’t feel dated, and when paired with the oddly moving Bovell-penned score, you have a film that at once feels incredibly lived in and naturalistic and yet also thrillingly cinematic. Performances are equally as entrancing, with Forde turning in a top-notch performance as the film’s lead. He himself came from this scene, as the frontman for the aforementioned Aswad group, and his performance is rich and layered, with Blue being a compelling screen figure. Presence is a big deal for these performances, and each new cast member has a specific presence that all feel of a single piece with this larger sociopolitical narrative. It’s simply a film that will blow one’s socks off. Given the lack of buzz surrounding the film since it’s debut nearly 40 years ago, the fact Seventy-Seven Films and Kino are bringing this to theaters is proof again that streaming may be the future, but for those with an interest in discovering new things, theatrical experiences aren’t dead yet.