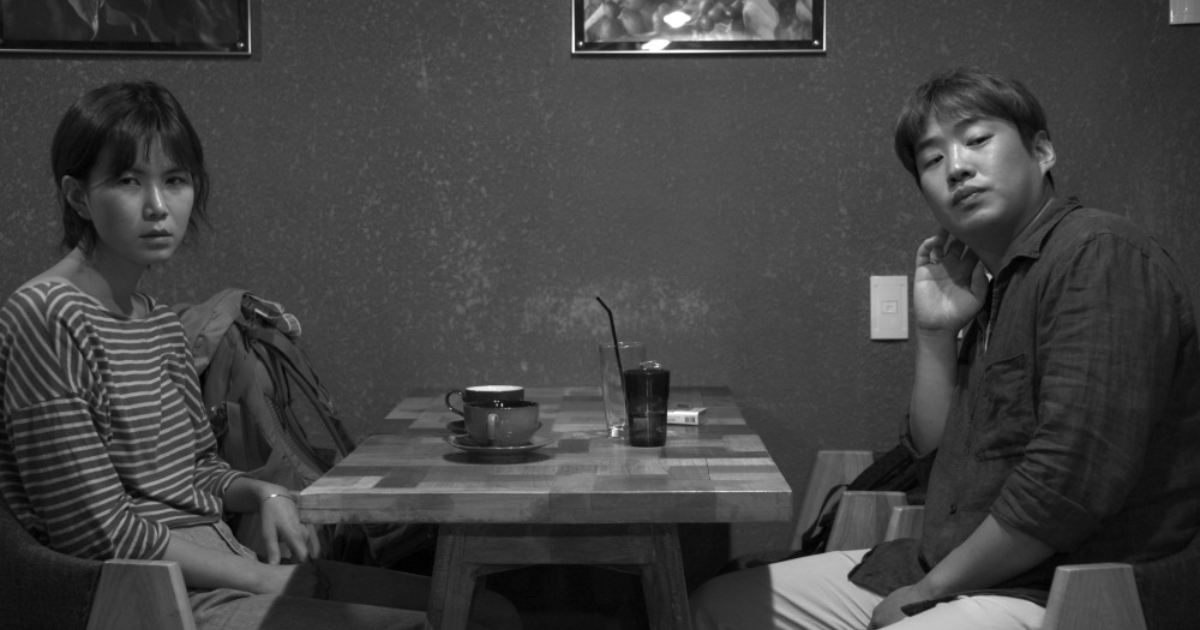 At this point, it’s become almost cliche to start off a review of a new film from director Hong Sang-soo by discussing the nearly comic level of productivity the filmmaker has been working at over the last half-decade. Starting in 1996, Hong has since gone on to produce 22 films, with two of them arriving here stateside within the last three months of one another.

Following up his breathtaking Hotel By The River, Hong returns with yet another Kim Min-hee-starring picture, the incredibly hypnotic Grass. Ostensibly a collection of vignettes, the film stars Kim in the role of Areum (yes, the same as her character in The Day After), a woman we seen working on her laptop while a series of events occur within earshot. Viewers watch intimately as a young man and woman claim that one another were responsible for the recent suicide of a mutual friend. There’s an actor who arrives only to see if a past love could help breathe new life into his existence. A filmmaker tries to convince our lead to join him on a lengthy writing excursion. These are all reflected through (or imagined by) the eyes of Areum as she, through narration, refracts and attempts to make sense of these slice-of-life parables.

Admittedly a bit more straight forward and “small scale” than much of the already low-key films of Hong Sang-soo, Grass feels especially ambulatory. Viewers watch as, over the film’s 66 minutes, our central character peeks into the lives of men and women locked in existential crisis, only catching their stories second hand and ripped out of any percieved context. More in a tradition of live theater than really filmed art, Grass feels like a Separate Tables-like experiment in narrative fiction. Experimenting is the name of the game for Hong, who despite having seemingly modest dreams as a maker of quiet, interior dramas, has spent much of his career experimenting with structure, time and things even metaphysical within his pictures. This doesn’t change here, it just becomes more potent.

Grass is, arguably, Hong’s most distilled work in quite some time. While similar in breadth to a film like Claire’s Camera, the ambition here appears to be greater despite its modest setup. Shot heavenly by oft-collaborator Kim Hyung-ku, the black and white photography is gobsmacking, and the nuance with which Hong shoots the film is equally as moving. The simple setup allows even the quickest of smash zooms to pack with it intense weight emotionally and narratively, particularly as Hong is such a keen documentor of human interactions. He mines his pet theme of male/female relationships both romantic and artistic, amping up the theatricality by getting superlative supporting performances from a cast including greats like Ki Joon-bong, Seo Young-hwa and Gong Min-jeung, among others. Each performance is modulated perfectly within the larger narrative, with each character feeling as though they have lived a life before coming into this story and will live a changed one after walking out. There is, too, a metaphysical quality to the film, as Hong’s direction gives the film a sense of otherworldliness, using the black and white photography and intimate framing to turn what could be just a standard chamber drama into something much more dream-like. Is Areum seeing what she has written? Is she writing what she’s seeing?

It’s this central question that makes Grass so alluring. While Areum becomes an active participant occasionally during the film’s brisk runtime, the narrative feels incredibly dream-like with the cafe playing as some sort of existential waypoint. Characters feel caught in circles of alcoholism and infidelity, loops that feel right at home within the temporally circular works of this filmmaker. He himself is a director seemingly captivated by pet themes, with this recent rush of films almost exclusively dealing with love and loss, life and death. A soju-soaked rumination on the human condition, Grass finds Hong at his very best, crafting a haunting meditation on storytelling that ranks up there with the very best works in his ever-expanding filmography.