There are few musical entities quite like the ever enigmatic singer/songwriter/composer/raconteur/genius Nick Cave. Beyond being the lead singer of the beloved rock group Nick Cave And The Bad Seeds, which launched his career to all new heights starting in 1983, he’s led such groups as Grinderman and The Birthday Party, and has become a singular voice in the world of post-punk, experimental rock music that is as influenced by gothic art as it is jazz music. Recently, he and Bad Seeds band member Warren Ellis have gone into the world of film music composition, teaming with John Hillcoat for a series of films as well as Andrew Dominik for his masterpiece, The Assassination Of Jesse James By The Coward Robert Ford. One of the music world’s most entrancing names and one of its great cult figures, Cave is a man, musician and artist beyond comparison.

And now he’s the subject of a documentary that is equally as singular and esoteric. And equally as important.

Entitled 20,000 Days On Earth, this Drafthouse Films release comes to us from artists/filmmakers Iain Forsyth and Jane Pollard, and is as far from a typical biographical documentary as one could ever imagine. Nonlinear in its structure and enigmatic in its execution, Forsyth and Pollard’s film is a brazen piece of experimental storytelling. Meshing studio session sequences with Cave and his Bad Seed brethren with interview segments involving those closest to him and even a fictionalized therapy session which in and of itself plays as the film’s central narrative vehicle. A series of conversations led by Cave, these therapy session bits see Cave discuss things ranging from his relationship with his late father to the losing of his virginity, each conversation playing as a perfect embodiment of some aspect not only of his life, but of what would become Cave’s artistic voice and aesthetic. From his fear of leading his twin sons down a life too sheltered to the idea of him playing chicken with trains as a youth, each of these segments, paired opposite the thrilling bits of performance showing the actual creative process of Cave, are some of the most exciting and stimulating bits of documentary filmmaking of 2014.

Visually, the film is equally as engaging. Crisp and brooding photography adorn the film, with Pollard and Forsyth’s sense of style really coming through clearly. Cave himself also has his hands all over the picture, with a voiceover leading the proceedings and helping to keep the film moving forward. Clocking in at just shy of 100 minutes, the film’s pacing is superb and allows the film to breath in a way that his music has been able to for over three decades. Tinged with a sense of impending doom and a melancholy brood that only Cave can muster, 20,000 Days may very well be the year’s most groundbreaking and aesthetically important piece of non-fiction filmmaking. Blending non-fiction tropes with a sense of theatricality that is rarely seen in even the greatest bits of narrative fiction, this is really one film that needs to be seen to be believed.

For fans of Cave and his art, this is without a doubt the year’s greatest piece of documentary filmmaking. Giving a rare insight into an artist that has become as big a cult figure as the music world has ever seen, directors Pollard and Forsyth have given cinephiles a feast of experimental documentary filmmaking unlike anything the film world has ever seen. And yet only something this rare and breathtaking could be truly fitting of a singular voice like Nick Cave. Must-see doesn’t begin to describe this journey. 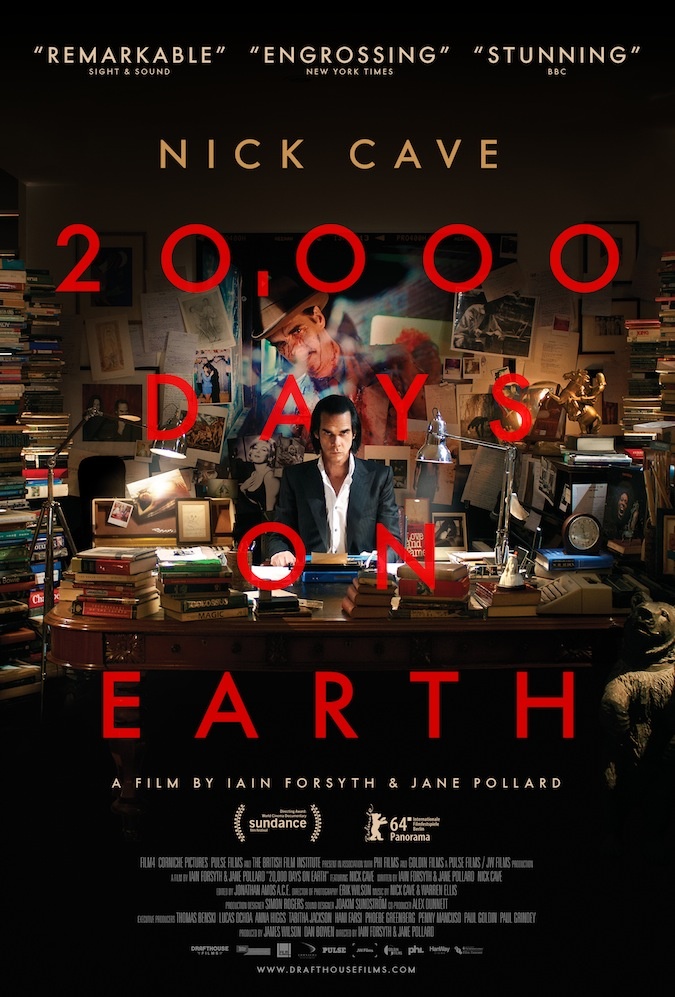