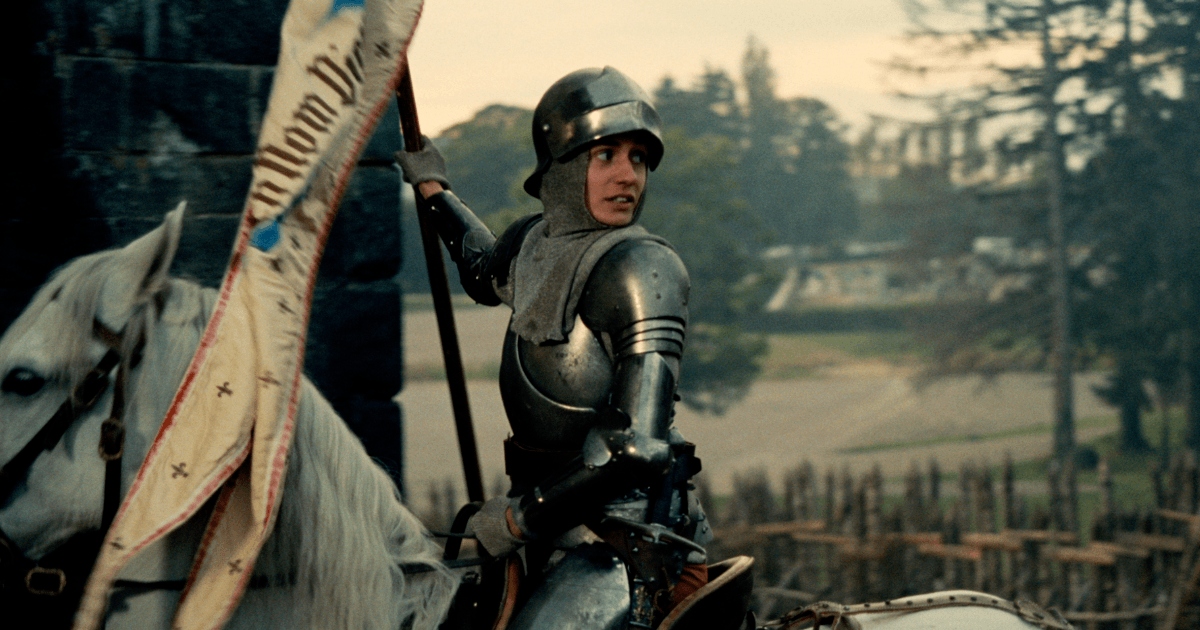 From the earliest days of silent cinema, filmmakers from across the world have been captivated by the story of the woman that would become known as Joan of Arc. From the iconic, groundbreaking Carl Dreyer film The Passion of Joan Of Arc to Bruno Dumont’s punk rock, heavy metal musical Jeanette, film has sought to not only tell the story of Joan’s life and times, but do so in ways that add to the formal language of cinema itself.

One of these great, exemplary experiments in telling this legendary story comes from none other than iconic French auteur Jacques Rivette, and is now available in a gorgeous, Earth-shattering 4K restoration from Cohen Media.

Entitled Joan The Maid, Rivette’s interest in Joan’s story spans two films, The Battles and The Prisons, and is an epic scale, keenly focused rumination on the life and times of the woman who would go down in history not just as a great French icon, but quite literally a Saint. Again, broken up into two parts, this roughly six-hour epic is a quite, subtle rumination on the moment that birthed the legend, with actress Sandrine Bonnaire garnering some of the greatest notices of her career for this award-nominated turn as the titular character. The Battles is the first segment here, and both introduces viewers to Joan in an incredibly formative state, and watches as she goes from simple maiden to a leader in the French army’s attempt at pushing back the oncoming English forces. The second sequence is a much different beast, a film of incredible melancholy and ultimately profound sadness, as the film proceeds from her greatest loss in battle to her final moments on the stake. From an illiterate teen to a liberator of French cities and anointer of kings, Joan’s tale is an enduring one, the ultimate heroes tale that ends in utter terror after being captured following failed attacks on Paris and Compiegne.

A director of experimental, theater-influenced films, Rivette doesn’t initially seem like the type of filmmaker that would grab hold of a historical epic and in his own way go wild with it. However, that’s more or less what he does here. Unlike most films of this grand length, Joan The Maid is an utterly compelling and expertly crafted experiment in historical storytelling. Rivette’s camera is more or less static, using lush photography and tactile costume design to embed the viewer within a fully realized world. In many ways the most aesthetically accomplished work in the Rivette oeuvre, Joan is an atmospheric work, with battle sequences clouded in smoke and each lengthy dialogue sequence given an almost Brechtian otherworldliness given the relationship between the gorgeous color photography and the heavily theatrical costume design.

Theatricality, a major part of Rivette’s broader project, is a key aspect of this film. All of the director’s pet themes are still crystal clear here, be it the relationship between language and performance or gender dynamics, Joan is chock full of entrancing scenes that blur the line between film and theater, all the while telling the story of a woman consistently bucking tradition and breaking down conceptions of female power. Closer to the work of Straub-Huillet than Rossellini (as some critics compare), Rivette’s film feels in conversation with a work like Eyes Do Not Want To Close At All Times Or, Perhaps One Day Rome Will Allow Herself To Choose In Her Turn, where spaces and costumes are designed to be period-specific yet have such a polish and are used in such a mannered way as to be not just theatrical but have an almost otherworldly, ethereal atmosphere to them. And come the ultimate end to this character’s arc, the film leaps out of film or theater, into something more spiritually transcendent.

Every aspect of this film finds the team behind it at the very height of their powers. The direction is by the hands of a director completely assured in his own aesthetic voice, the script is nuanced and rightly verbose and the photography, while not leaning away from the theatricality of the staging, elevates the modestly budgeted film into heights of real artistry. And yet they all pale in comparison to the lead performance from Sandrine Bonnaire. Walking in the shoes of some of the great performances in all of cinema, Bonnaire makes it her own by taking on not just a larger chunk of Joan’s life than most but doing so with a quiet energy that’s rare in this type of stoic character. Going from pious teen to full-blown warrior, Bonnaire’s performance feels oddly lived in with her stoic self-assurance evolving into fearless confidence that feels heavenly divine. Changes in moods are told through the briefest of gestures and smallest of emotions making for a relatively dry film but one that allows the doubting of Joan by the men around her to not only feel foolish but like it will surely damn them for questioning her.

While the runtime may leave many wondering if they should commit to this newly restored epic, Rivette’s Joan The Maid diptych is not just one of the better restorations of the year, but is a film worthy of reassessment as one of the great historical epics full-stop. Come the final scene, you’ll feel like the world has cracked open. A true one of a kind film.