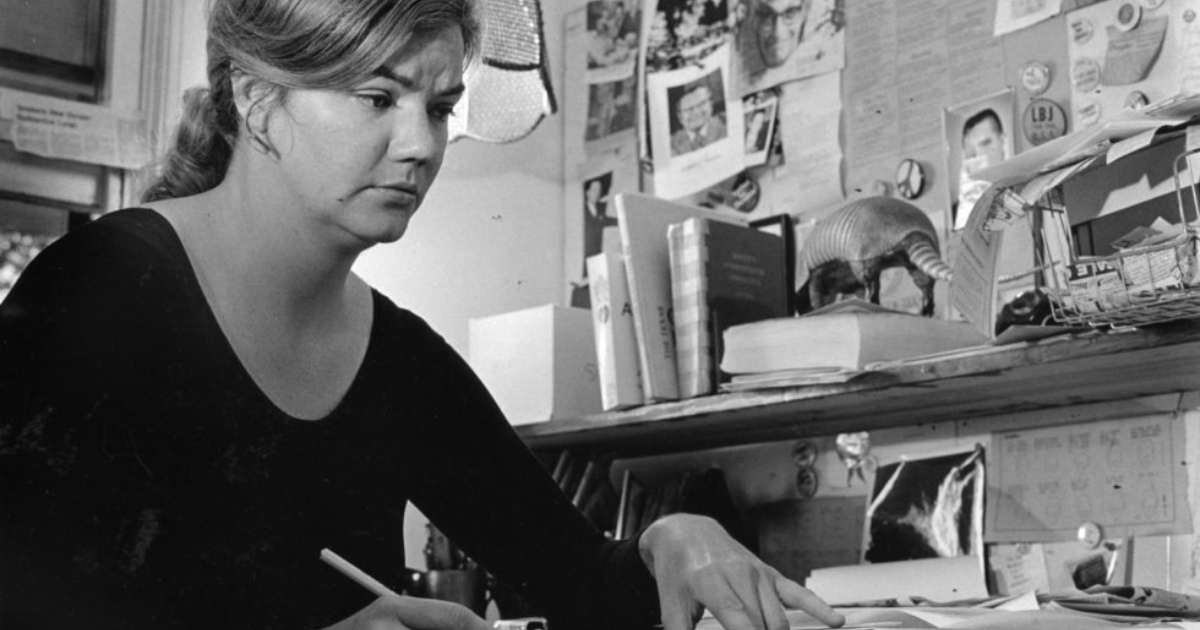 In today’s political landscape, to be considered some sort of “firebrand” usually amounts to thin op-eds in newspapers looking for some attention or having the loudest voice on the most shrill of network news operations. However, there have been few figures in modern political discourse more worthy of being considered a proper political raconteur than the incomparable Molly Ivins.

The subject of a new documentary entitled Raise Hell: The Life And Times of Molly Ivins, Ivins was a Texas-born political journalist who honed her craft in some of the nation’s biggest, and smallest, newsrooms. A titan of witty word work, Ivins spent her illustrious career focusing almost specifically on pointing out corruption and hypocrisy within governments both at a state and national level, regardless of party. Despite being a self-proclaimed “liberal,” Ivins became known for her willingness to pull no punches when waxing on about the happenings within the government, without ever once doing so with malicious intent. Out of a love for her country and the freedoms it bestows upon its citizens, Ivins became as hotly sought after a columnist as there’s been in modern journalism, and did so while never losing sight of her sincere aspiration to help make this country a better place.

As with the words Ivins wrote, the film (directed here by Janice Engel) plays like an absolute force of nature. Propulsive is a perfect word to describe this engrossing, if frustratingly hagiographic, documentary, with its 90-ish minute runtime playing out in what feels like meer moments. The style and structure are relatively rudimentary, focusing on a more-or-less chronological re-telling of Ivins’ life through a blending of her own words and writing, along with numerous interviews with contemporaries and admirers. It’s a structure that does little to add any singularity to the film, instead leaving Ivins’ work to speak ostensibly for itself. That’s not to say the film isn’t relatively intimate. Viewers learn about her life coming from an oil-fueled upper class family with conservative values, and ultimately finds the film culminating with her fight with a cancer that she battled with the same verve and vitality as she did the big wigs in Washington. It’s not a groundbreaking bit of filmmaking, but it is a properly engaging bit of biography.

But where does this sit then, culturally? As more and more filmmakers have the ability to bring their films to screens, is it enough to tell an interesting story, no matter the stylistic quality? Raise Hell is a compelling biography, however, there’s little interesting about it as a piece of cinema. The editing is typical for this type of documentary, and the structure feels almost crippling in its rigid nature. Also out on September 6 is Rob Epstein and Jeffrey Friedman’s Linda Ronstadt: The Sound Of My Voice, a similarly one note biography. Both films primarily focus on a chronological retelling of their focus’ lives, with a sense of intimacy without ever actually using that closeness to examine their lives in any real textured manner. There is a brief moment in Sound Of My Voice where this is broken, where the directors decide to actually inspect Ronstadt’s appreciation for a specific moment in time, that feels all the more frustrating when set against an otherwise simple documentary. And same for Raise Hell. Ivins is such a fascinating figure that, to see her life told without much actual nuance or inspection, makes this documentary at once engaging and also endlessly frustrating.