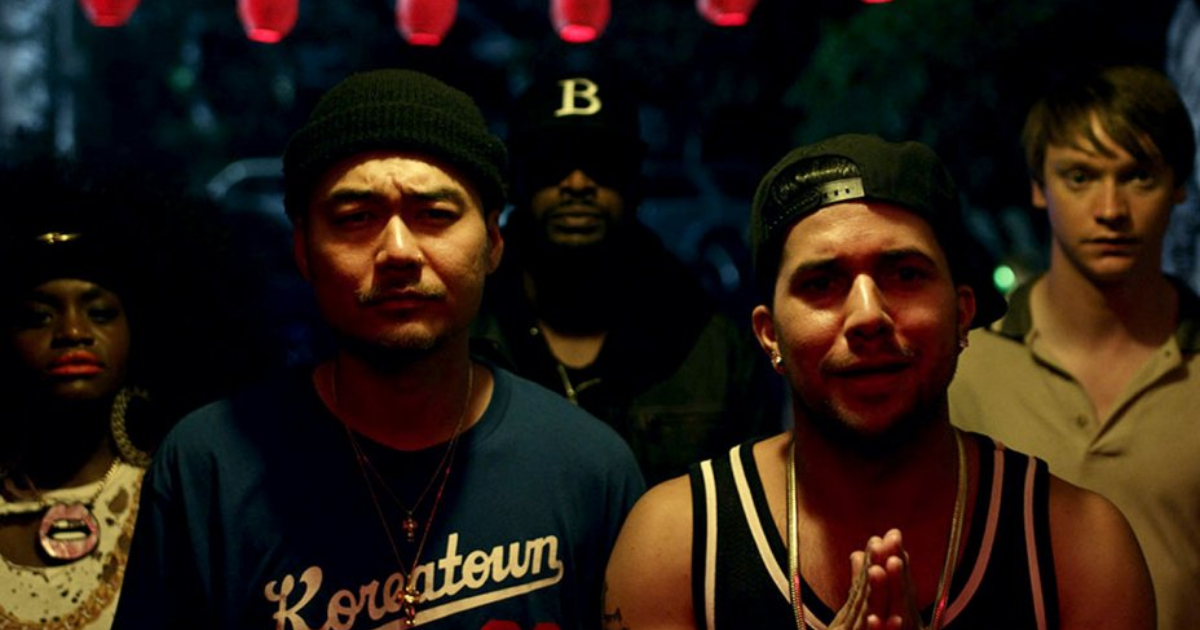 Not one known for subtlty or nuance, the original description of Joseph Kahn’s latest film Bodied as it began its festival run left one not only slightly stupified but also incredibly cautious. Billed as the type of comedy that would leave politically correct viewers clutching their proverbial pearls, Bodied has since become one of the year’s most hotly talked about films, a comedy looking squarely in the face of modern race relations and what it means to, or not to, be racist. It’s also even better than the current 96% Tomatometer score would have you think it is.

Starring Calum Worthy, the film introduces viewers to Adam, a white grad student working on his Masters thesis. A typical enough logline, the film becomes knottier as it progresses, revealing almost instantly that his is a taste for battle rap, a form of verbal combat that is at once incredibly poetic and also deeply troubling and often times disturbing in its portrayal of violence, sexism, homophobia and everything else under the offensive sun. Adam’s thesis is one rooted heavily in this world, a piece on the use of the “n word” and its relationship to battle rap and rap music writ large. A satire at heart, the film picks up when, after battling someone in the parking lot after a shot, Adam is thrust head first into this world, and all of its artistry, nuance, and shades of gray.

What makes Bodied the truly incredible piece of work that it is, is that it not only portrays this world as one of incredible nuance and understanding between both parties as to what the ground rules are, but it dissects what even that idea actually means. Throughout the picture you have numerous characters waxing philosophic about what it means to enter the battle rap arena, a world where everything from one’s race to one’s sexuality and all the backward stereotypes that go with them are free game. However, as our white lead begins to understand these rules, ultimately assuming that, come the final act everything is actually on the table sans any real-life repercussions, the idea and concept of privilege becomes the real center. It’s at once a film about how context is absolutely everything in the usage of language amongst different cultures and populations, and yet it also dives into the idea that these singular settings are still able to be upended to build power structures. There’s a great deal of depth to this film, a film about ethics and the perversion of said ethics by people in positions of power.

It’s also incredibly funny. Gut-bustingly so. Even if one doesn’t have any real understanding of rap or this specific version of it (Adam’s girlfriend is ostensibly the audience during the film’s opening sequence, a scene setter that helps adjust the viewer’s understanding of the tone of what’s about to happen), there are some overtly funny line readings and visual gags (even down to the superimposed images like Adam’s internal “folder” system that he keeps his various jokes in) and some more subtle lines that are all in the execution. Jackie Long plays a rapper named Behn Grymm, and while his entire performance is superb and the right blend of typical sports movie mentor and flesh and bone character, line readings like “this ain’t no act, you never heard of a code switch motherfucker” are genuinely funny and also hint at the type of tone Kahn is taking with this controversial material. Similar in many ways to a film like Sorry To Bother You, Bodied leans fully into the comedy without ever losing that balance between humor and insight, something Boots Riley’s film had a much harder time doing despite being similarly surreal.

Having birthed a cult with films like Torque and Detention, Kahn is at his very best here, setting his satiric eye towards the type of “woke” leftists who are perfectly fine drawing lines for cultural sensitivity but never seem to understand when they, in turn, cross them. Clearly a progressive leaning picture itself, Bodied sees Kahn flourishing in the battle rap sequences, playing each one differently and increasing the tension and surreal style. Every frame pops, be it through Kahn’s consistently kinetic framing and direction or the photography that makes this world feel rightly heightend, almost alien. Come the final act, one can’t help but draw a comparison to films like those from John Woo, turning the finale into something more resembling a Raid-like shoot-out and less like the 8 Mile riff it began as. But despite all of this action, the film’s politics are clear. Just because you are supportive of and empathize with a less powerful group, doesn’t mean you’re a good person. Adam doesn’t know or understand the plight of the minorities he’s poking and prodding. His “woke”-ness is grad school born, born of a scholarly father and monetary freedom. It’s hollow. And Kahn has no interest in ever letting him off the hook, the film ultimately being better off for it. Real empathy is earned, not bought.