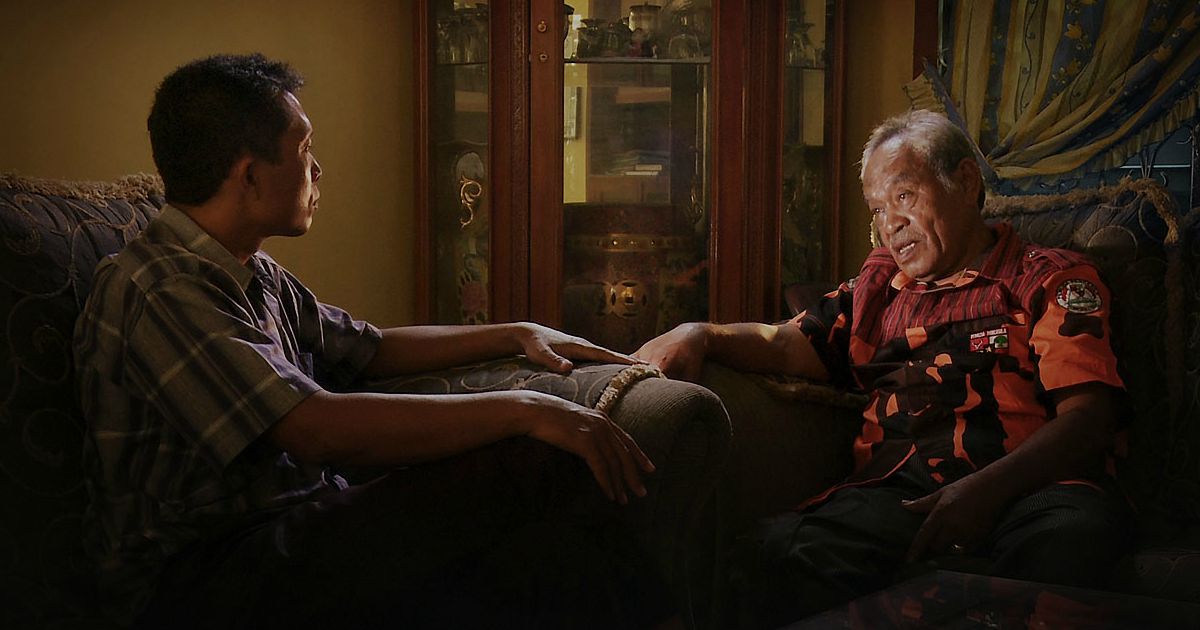 There are few filmmakers working in documentary cinema quite like Joshua Oppenheimer.

After a career in short documentaries, he became one of the most interesting voices in the medium with his debut, the groundbreaking and boundary pushing The Act Of Killing. A haunting and deeply profound look at the mass executions that took place in Indonesia in 1965-66, the film is, and very much was at the time it debuted in 2012, one of the most formally groundbreaking pieces of non-fiction cinema you’ll ever see. Toying with ideas like perception, violence and the human relationship with both of those things, Oppenheimer’s follow-up has been anxiously anticipated ever since. And it’s finally here.

A companion piece to that masterful feature, The Look Of Silence is much more tone poem than its predecessor, and yet despite the vast differences in the two films, it is just as powerful, if not more so.

Once again looking at the 1965 Indonesian genocide, this film shines a light on one of the surviving families, particularly a young man whose brother was brutally murdered in the killings. Introducing us at first to the late man’s parents, the film then introduces us to the young man who will be our central focus, an optometrist named Adi. Deciding that he wants to know more about what truly happened and hear it from the men who committed the heinous acts, Adi offers free eye exams to a handful of men involved in the death of his brother, in the hopes of being able to dig deeper into their actions, and make them take some sort of responsibility. The definition of a companion piece, the film may take a much smaller scale and may be much more muted stylistically, but it is no less powerful and no less brilliant.

It’s impossible to discuss this film without instantly comparing and contrasting the previous picture. While The Act Of Killing was a troublingly complex and in many ways grandiose look directly into the mind of men who killed thousands of people in Indonesia, this film is the splash of ice cold water on their face, waking them up to what truly happened. As seen in Oppenheimer’s previous film, these men see themselves as heroes. As John Wayne white hats. However, the beauty in Oppenheimer’s follow up comes in its poetic use of Adi’s job. As an optometrist, he gets these men to not only literally open their eyes for him to test their vision, but figuratively as well, as these men begin to truly see the horrible crimes they have committed.

Visually, the film is stunning. Much less grand than Oppenheimer’s last film, The Look Of Silence is an intimate tale of one man looking brutality square in the face. Deeply profound and powerful, this film focuses squarely on the repercussions of violence, the space between the two realities that the victim and perpetrator live in. Focusing on the morality in that space, Oppenehiemer’s new film is one of depth and richness, as well as raw emotional magnitude. The photography here is rich and layered, with the camera never afraid to catch the smallest of moments, each being lushly lit and textured. He catches the purest moments of clarity that you’ll ever see, and does so with an assured and yet intimate hand. Calling less upon his style than previously seen, he lets his camera linger on faces, the eyes of men who have taken the lives of innocent people taking center stage here. Intercut with interviews with Adi’s parents, the film is as emotionally resonant a documentary as you’ll ever see, and simply one of the highest achievements in non-fiction filmmaking this year.

While continuing to compare this to The Act Of Killing seems unfair, in reality it is not only the opposite of that, but in fact it is a glimpse into the brilliance of both films. Two films very much cut from the same cloth, The Look Of Silence is a film that could only exist after making a film like The Act Of Killing. Playing with tone more than perception here, Oppenheimer at first gave us the way villains view themselves after committing their atrocities, and now he’s giving us a look at the scars that these acts leave on those who have them committed on. One of the great voices in modern documentary cinema, Oppenheimer has crafted what may very well be the heir apparent to the type of provocative cinema that a director like Claude Lanzmann has made a career out of. This is a film that cannot be missed.