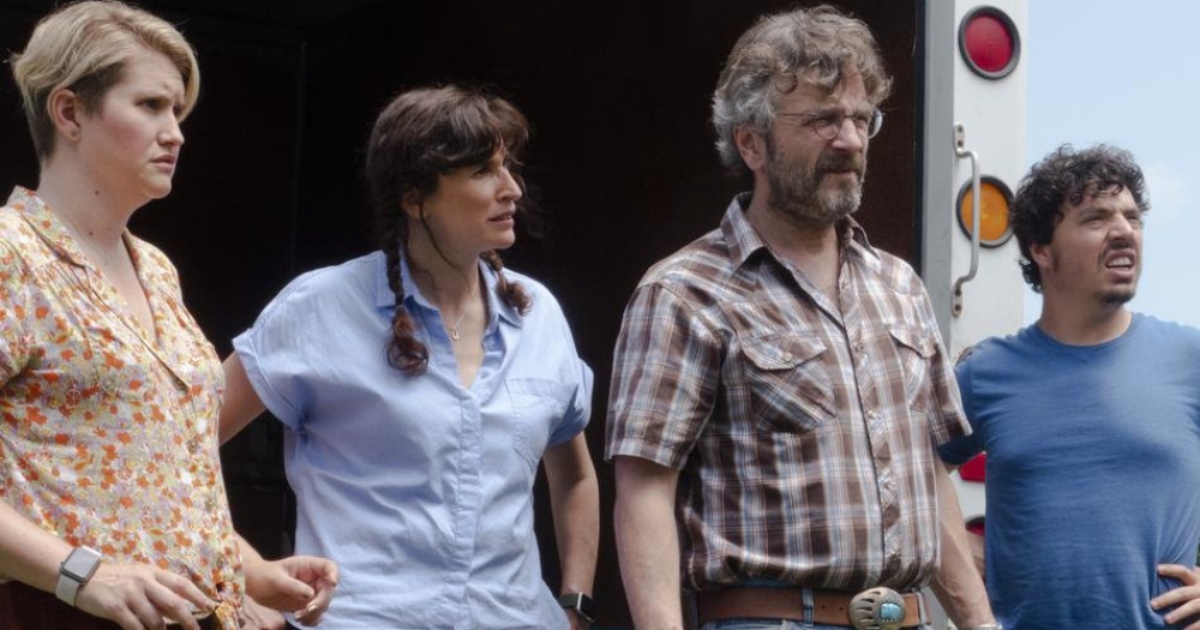 With a career now well over a decade in the making, director Lynn Shelton has gone from an icon of the (grotesquely-titled) mumblecore scene into one of the most exciting directors of the big and small screens. Executive producer on the upcoming, hotly anticipated adaptation of Little Fires Everywhere (also directing two episodes) for HBO, Shelton is about to have an incredibly busy schedule, and hopefully that extends to theaters as her newest film may be one of her most interesting yet.

Sword Of Trust, Shelton’s eighth feature film, is an incredibly charming and bizarrely sweet comedy, introducing viewers to Cynthia and Mary (Jillian Bell and Michaela Watkins respectively), a couple attempting to collect an inheritance from Cynthia’s recently-passed grandfather. When the sole items she receives are an antique sword and a document that attempts to prove that the Confederacy actually won the Civil War, the two initially try to pawn it to a local shop run by Mel (Marc Maron), only to get caught in a web of conspiracy and uncertainty after informing a group of collectors as to their new discovery.

Despite the potentially knotty narrative, the true greatness of Sword of Trust is its overarching sense of humanity and stylistic looseness. Billed as an “improv-based” comedy (which for anyone familiar with Shelton’s work or the “mumblecore” movement writ large shouldn’t actually be too surprising), the film leans into the loose nature of Shelton’s process without ever feeling ramshackle or of low quality aesthetically. Her direction is superb, if rightly muted, allowing each performance to breathe and each line of expertly delivered dialogue to really sing. Set in the South, the film’s photography is warm and hospitable, with each setting feeling properly lived in and of a piece. The pawnshop setting is particularly fascinating, as each nook and cranny of the frame is filled with something interesting, yet never distracting from the comedy (and occasional horror) that takes place in from of its glass cases. It actually feels in conversation, more broadly, with a film like Joe Swanberg’s Drinking Buddies, which saw that contemporary of Shelton’s take a bigger-named cast and elevate his style without ever really losing his sense of naturalism or humanity. The two films feel of a piece with regards to their director’s career trajectories, and hopefully this is the start to a truly fruitful stage for one of American independent cinema’s great voices.

It also helps the performances here are truly impressive. Bell and Watkins are great here, but the real star of the show is Maron, who may give his best performance yet in this picture. Maron is otherworldly good here, giving a performance that doesn’t veer far from the curmudgeon-like nature of previous roles, but sands down some of the edges with a sense of warmth and introspection that has been missing from much of his work. There’s a sequence near the film’s final act in which he opens up about a past relationship, and for fans of his this will be seen as a major text of sorts, placing his character (and himself, honestly) as a proxy for a generation of aging punks who have seen unshakable pain and anguish. What should, in any just world, be a scene shown come Oscar Sunday, it’s an impressive piece of acting that proves he’s more than just a great podcast host.