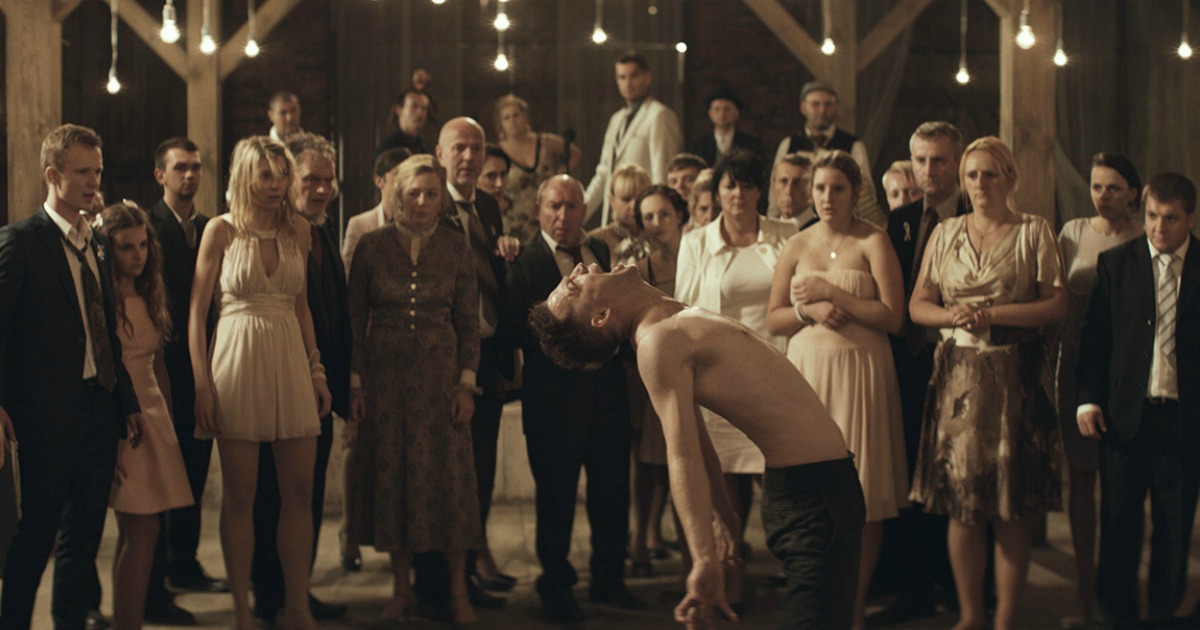 In the case of director Marcin Wrona, it’s hard to begin any review of his latest film, Demon, without first discussing how it became his last. After the film debuted to high praise at last year’s Toronto International Film Festival, Wrona would go on to take his own life just prior to the film’s Polish debut. A filmmaker long described as the next Roman Polanski, Wrona’s last film is finally arriving in theaters, and with roots set firmly in both Polish cinema and horror cinema more broadly, Demon is a pitch black comedy that moonlights as one of the year’s most tense horror/thrillers.

Set ostensibly over the span of one wedding, the film introduces us to Piotr (Itay Tiran) as he arrives in a small Polish village to marry the sister of a close friend, a beautiful blonde named Zaneta (Agnieszka Zulewska). Hoping to gain ground with her family by rebuilding a family home for he and his wife, Piotr comes across something appearing to resemble a human skeleton on that very house’s land. The morning arrives, and things turn decidedly sour, as what appears to be a routine nosebleed evolves into something far darker and far more dangerous. We watch as Piotr goes from joyous soon-to-be husband to scared victim of something unknown.

As much influenced by Polanski as it is a black comedy like Milos Forman’s The Fireman’s Ball, Demon is a profoundly unsettling demonic possession picture, a film that seems entirely unlike anything we’ve ever seen. At once a simple possession film that plays on Jewish folklore spanning generations (the central demon is revealed to be a dybbuk, or “clinging spirit”), the thematic resonance from Demon comes in its discussion of an idea even older. The central theme of the film arrives when characters begin to question whether he found a skeleton or not. With Zaneta’s father proclaiming that his country was “built on corpses,” the past becomes the demon each character isn’t so much trying to run from as much as they are trying to flatly ignore or cover it up. Rightly engaging the viewer to wrestle with this theme long after its complicated and unsettling final act concludes, the concluding shot will confound many but those willing to give in to the film’s ambiguity will find one of 2016’s most rewarding, atmospheric horror pictures.

It’s also one of its most beautiful. While Polanski often gets his name dropped as a comparison to Wrona’s work, Demon is neither as claustrophobic nor surreal as Polanski’s greatest films. Wrona’s picture is far more tonal, driven by ambiguity and atmosphere. The photography here is absolutely superb, with Wrona-regular Pawel Flis giving the film a tactile and lived in sense of reality. The wedding sequences are as inviting thanks to the warm lighting as they are deeply troubling from the naturalism with which Wrona shoots his lead character’s possession. Be it a Kubrickian close up showing a fading smile on his face or a seizure shot in static tableaux, Wrona’s camera is quiet but assured, often settling for a barely noticeable close up to add tension instead of bombastic jump scares and special effects. An elemental ghost story, Wrona’s film is horror cinema distilled to its most primal roots, a film that’s incredibly strange and only becomes more esoteric once the film’s final sequence, a poetic epilogue of sorts, arrives.

Performances here are also quite good. Tiran is top billed as Piotr, and while he is genuinely quite good (particularly as the gender of the spirit is revealed, it’s quite an interesting bit of acting) it’s Zulewska that’s the star here. While she doesn’t know all that much about her now husband (or at least they haven’t met in person prior to this), there’s a tactile desperation that feels real and emotionally resonant. One could see the film being more Polanski-esque if the film is seen from her point of view as it turns it into something much more surreal, with the final act cementing her performance as something truly remarkable. Andrzej Grabowski is also quite great as Zaneta’s father, a man who is as unwilling to admit that his now son-in-law is possessed as he is ready to let his party goers have a bad time. His performance is where much of the film’s darkest comedic bits come, and it’s a really intriguing piece of acting.

While the story off screen surrounding this film is one of the more sad in recent memory, Demon is a superb final film for the late director Marcin Wrona. A genuine horror masterwork, Wrona combats dense issues pertaining to the demons the past cast over the present in a black comedy possession thriller unlike any we’ve ever seen.