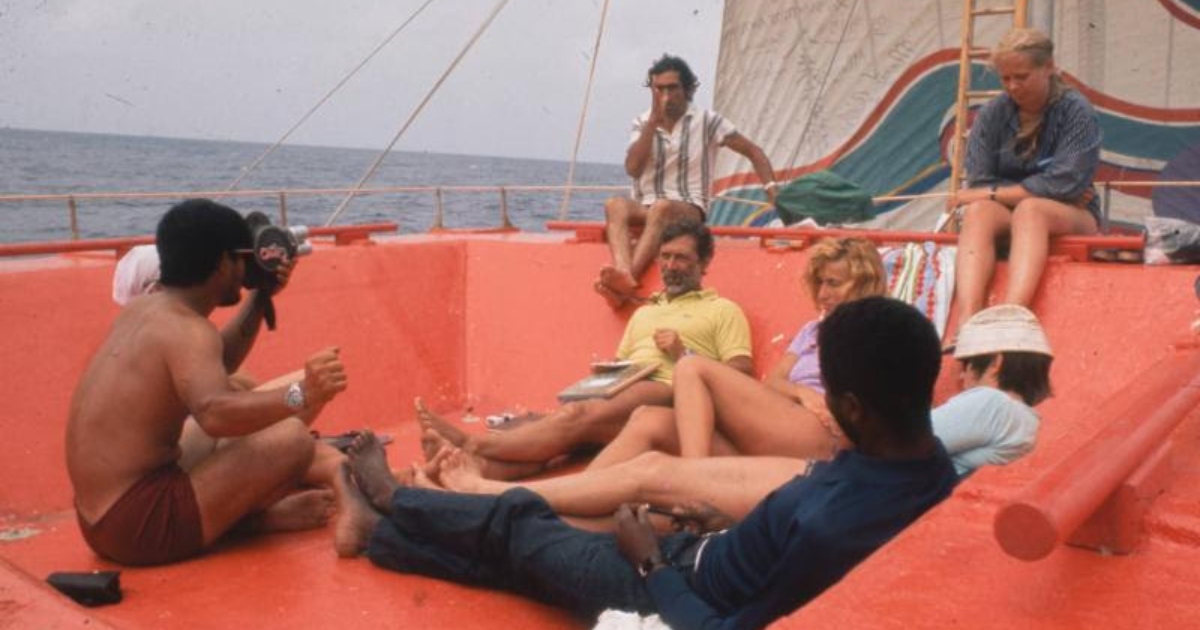 46 years ago, one of the great and profoundly controversial anthropological experiments began. Setting an international crew out onto the Atlantic, polarizing anthropologist Santiago Genoves tapped five men and six women to board the tiny raft known as The Acali, with the hopes of getting down to the nitty gritty not just of human interactions, but the evolutionary nature of violence both physically and emotionally.

Now the subject of a thrilling and provocative documentary known as The Raft, this story is at once cartoonish and utterly prescient, and director Marcus Lindeen has turned in a film that doesn’t skimp on style either.
The Raft is one of the rare documentaries in 2019 that actively attempts to transgress both narrative and stylistic tropes. Narrated by Zama star Daniel Gimenez Cacho, the film more or less tells the story of this voyage in chronological order, but while the structure doesn’t seem to, on the face of it, break much new ground, the form does in many ways. Bringing back into the fold the remaining men and women who went on that fateful journey, Lindeen thrusts these former crew members back into the moments they experienced through both literally placing them in a facsimile of the raft and also putting them face to face with the research that Genoves wrote while observing the group.

What makes this a documentary worthy of more than just a spur-of-the-moment stream on Hulu or Netflix, is the film’s uncanny ability to balance fact with fiction-style genre spins. Feeling closer in style to something like a true crime documentary, the score is thrilling and ear-grabbing, the photography is rich and textured, and frequent Lars von Trier production designer Simone Grau Roney brings back to life the central raft, through a Dogville-like recreation. Seeing each of these men and women interact not just with one another but a recreation of something that led to such dramatic trauma is utterly transfixing, particularly as the relationship between the women of the crew begins to expand.

It’s also a timely piece of sociological anthropology. As a film about a singular moment in time, it’s perfectly engrossing. As a portrait of female companionship and toxic masculinity? It’s an absolute wonder. Not only was Genoves a grotesque monster the likes of which we only see in the White House today, but through Cacho’s narration, we hear (and ultimately watch) as he becomes a fame-hungry proto-Survivor producer gone haywire. He’d attempt to control more and more of what goes on, only to subvert every original conceit he had going into the experiment, and pairing this devolution into delusion opposite the story of 11 men and women devolving into violence all their own is a smart, exciting juxtaposition. And yet, what does the crew think today? We see Genoves in archival footage, but through the voices of the crew members proves to be more insightful. Some find him disgusting, some remember this experiment with a bizarre fondness, with this duality only playing up the “who-dun-it” type atmosphere that Lindeen and crew are going for. It’s a strange, oddly engrossing piece of non-fiction filmmaking.