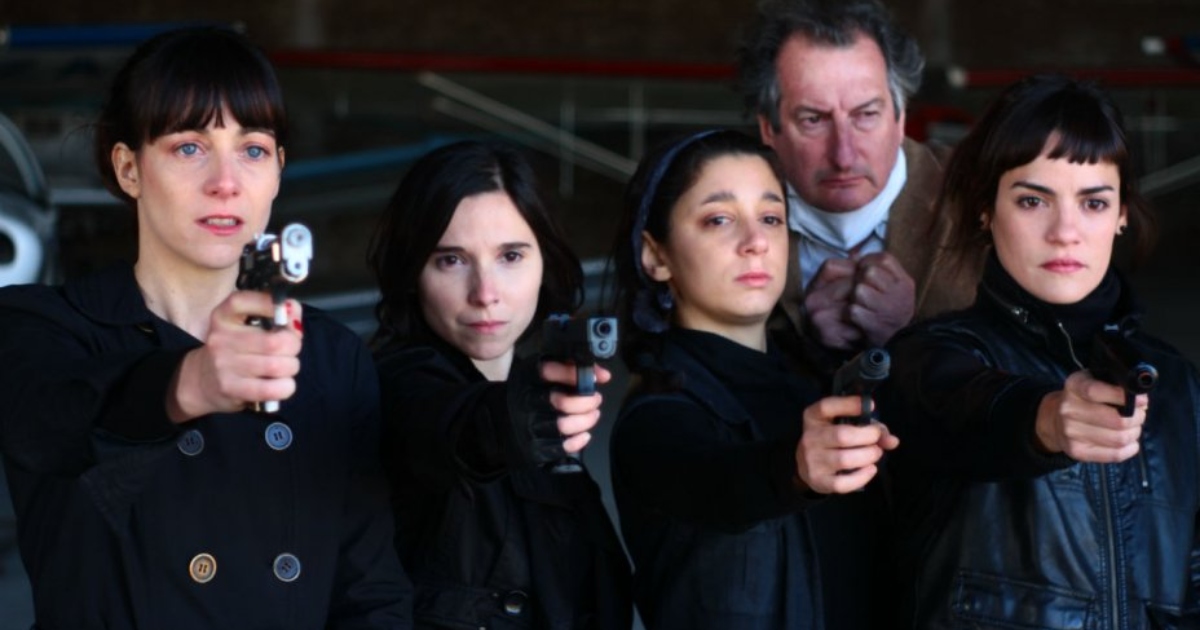 What’s in a name? Well, with the latest film by director Mariano Llinas, La Flor, quite a bit.

Clearly weighing heavily on the mind of Llinas, the film begins with the director appearing on screen, with the hopes of him being able to explain what the following 800-plus minutes will be more or less “about.” Narrative is at the very core of La Flor, which is Llinas’ attempt not only break down the conventions of fictional storytelling, but do so with a quartet of actresses that become over the span of the ten-year shoot of La Flor something even more intimate than “muses.”

The film opens with Llinas, in some stage of disheveled that will only escalate as the film progresses, describing the idea behind the six stories La Flor will muse on. Anyone familiar with the marketing for the film will be familiar with the image Llinas begins drawing, which includes four “petals” denoting the four stories here that “have no ending.” These are the first four chapters of the film, which attempt to toy with not only structure but the very act of storytelling in the abstract. Episode five is billed as a “short story,” with a beginning and an ending, and finally episode six which begins in the middle and ends the film. These are the six “chapters” of Llinas’ epic, 14-hour masterpiece yet this is also only the beginning of what makes this such a special piece of fiction filmmaking.

First, a bit more information on the narratives. The first three segments, three of the four “without endings,” are all incredibly influenced by tried and true genre stereotypes. La Flor opens, for example, with a Tourneur-style B-horror film, a film about a mysterious mummy and the problems its discovery brings to light. Subsequently jumping into the world of musical melodrama, the film focuses on the relationship between two former musical collaborators and the tensions that arise between them (while not losing sight of the mysticism of the first chapter, what with the inclusion of a side narrative about a cult leader who believes scorpion venom has special powers). Finally, chapter three is a spy film that, starting at what we discover is the climax of the film, reverses itself in order to introduce viewers to the origins of the four central spy characters. The longest chapter in the film itself, this spy segment takes its time and itself ranges from typical espionage thriller to romance with a final origin story that may be the single best segment in the entire picture.

Then, following that segment, something appears to break within the film and its maker. For chapter four we see as a film crew, with the hiring of a new producer, attempts to bring about a breakthrough for a six-year-long production of a film based on a drawing similar to the one we see Llinas draw minutes into La Flor. This is the film at its most meta and self-referential, a film about trying to rope in creative insanity through any means necessary. The “short story” here is a strange one, seeing Llinas more or less remake Renior’s A Day In The Country, which is the film’s sole completed narrative and also an almost completely-silent black and white love letter to silent cinema and a return to Earth for a filmmaker who, by the short piece’s end, seems to have burst free once again. And finally, chapter six, which sets a returning quartet of actresses (who are oddly stripped from the previous chapter despite being the main focus of the film writ large) opposite intertitles taken from an 18th-Century Englishwoman’s diary about being kidnapped by natives, all shot via a camera obscura to turn what has uniformly been a crisp frame into an almost pointillist experiment in photography.

When one says that La Flor is 803-minutes long, they’re doing everyone a disservice. While not being a lie, it makes the film sound stodgy, with the runtime sounding more and more like the point of the film itself. That couldn’t be further from the truth. What makes this film so special isn’t that it’s long, it’s that through that length Llinas and his brilliant four lead actresses are able to be utterly captivating, endlessly engaging and full of life. The first three chapters are expertly told yarns ranging from the frivolous (Chapter 1) to the strangely moving (Chapter 3), with genre conventions being subverted at almost every turn. When things go more off the rails the film becomes even more alive, as the film begins to turn in on itself in Chapter 4, continuing the sense of genre subversion while adding self-referential layers upon increased formal experimentation. It’s truly a masterful composing of narrative deconstruction.

That said, it would all be for naught if the four performances were anything less than brilliant. Llinas’ muses here are Elisa Carricajo, Valeria Correa, Pilar Gamboa and Laura Paredes, all of whom give career-defining performances here. The highlight is the third chapter, with each actress getting their own origin story, and thus a moment to truly shine in front of a camera that clearly not only loves them, but seemingly needs them in order to exist. A segment entitled The Assassins is the highlight of this section, which sees Paredes caught in a romance with a fellow spy, a segment that not only continues subverting the spy film narrative but does so in a way that formally breaks from much of the film. It’s a more muted sequence, using a handheld camera that feels incredibly intimate and free in a way much of the Bressonian La Flor doesn’t.

Another segment that breaks the formal rigor of the film is its conclusion, the film’s briefest section but also its most transcendent. After a remake of Renoir’s A Day In The Country which strips the four actresses from the film, the finale sees them return, this time more mature, children clearly on the way, and obscured in a thrillingly experimental manner. Feeling painterly in a way most films don’t have the guts to, Llinas’ camera obscura textures envelope this short segment in a cloud of surrealist pointillism, a sense of atmosphere and moodiness that, opposite the beautiful, tactile bodies of his actresses, feels tender and cleansing in a way few films have. They’ve been kidnapped for a decade by this filmmaker, and this is their goodbye, their magnum opus.

The only real head-scratcher is the aforementioned remake of A Day In The Country. Coming after the film’s most self-referential segment, this feels completely out of the blue. Before this segment Llinas re-appears on screen, informing viewers that the women won’t appear and appears to be at his most frazzled. The entire sequence has a freedom about it that feels almost melancholic because instead of feeling like it’s born of true freedom, it feels born of resignation. Like a cinematic throwing up of one’s hands. That said, it is still incredibly well made and the choice to make it primarily sound-free makes the introduction of sound into the segment play with profound power.

La Flor will be daunting for 99.9% of people. At 14 hours with intermissions and a 40-minute credits sequence that’s actually endlessly watchable, it’s certainly a mountain to climb. However, the view from the top is one of absolute narrative transcendence. A captivating rumination on the artist-muse relationship, creativity writ large and the breaking down of narrative, La Flor is one of the very best films of 2019 if not the 2010’s all together. An absolute masterpiece, this film.