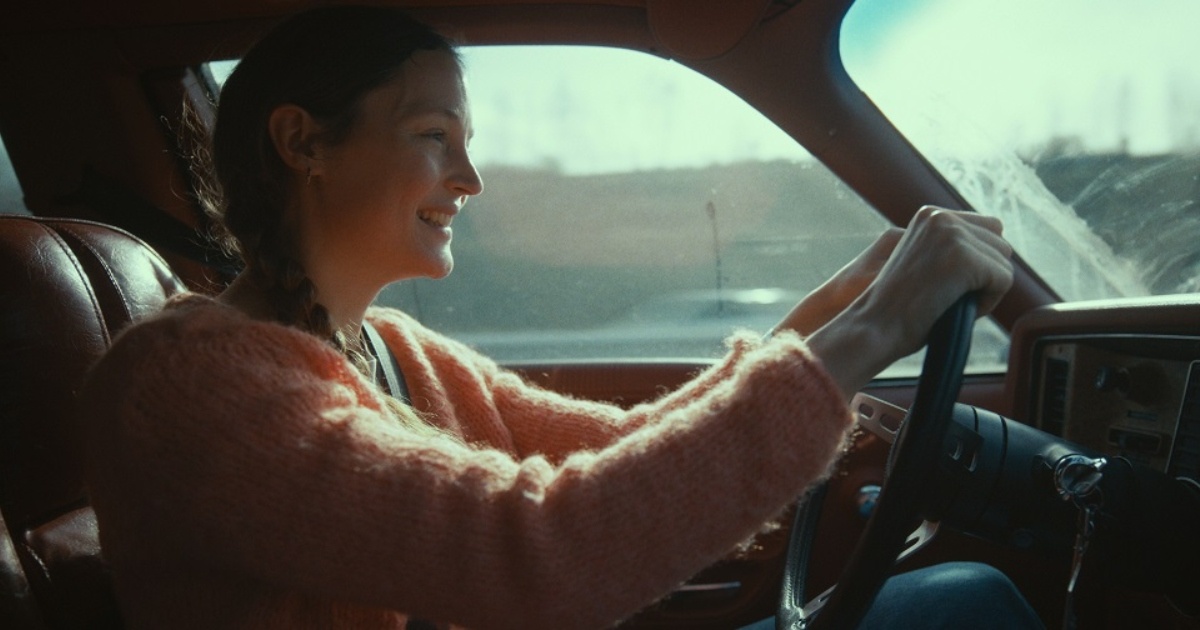 While hoping back and forth through time and space is all the rage in cinema it seems, there have been few recent examples of this that have felt more essential and urgent as the disjointed narrative of director Mathieu Amalric’s latest effort.

Entitled Hold Me Tight, the film stars Vicky Krieps as a woman named Clarisse, a wife and mother of two who, despite making a morning out of seemingly normal daily duties like making breakfast for her children, leaves home on an unexplained road trip of unknown import, time or end goal. Based on a never-produced play, Amalric’s film embraces this uncertainty and uses it as a launching pad for a story about one woman’s relationship to loss and all the what-ifs and regrets therein. Amalric jumps between Clarisse and the family she left behind, blurring the line between the two to the point where Clarisse writes to herself that she’s “inventing” the thought of leaving. Viewers are left watching Clarisse seemingly writing the future for everyone involved, to a point to where a vague, fairy-tale like energy begins bubbling through the film.

Maybe Amalric’s best work to date, the film also feels the most defining of his oeuvre. Manifesting his fascination with fantasy and the concept of it to the most tactile extent to date, Hold Me Tight may be visually muted, but the narrative and structure are brimming with moments of artistic evolution. There’s a deep conversation going on within the frames of this film, between two different responses to a trauma that ultimately branch out in ways that feel both otherworldly in their synchronicity and yet profoundly real and relatable.

And thankfully, for a film balancing on the tight rope between human drama and melodrama, the performances here are truly superb. In roles that would otherwise be thankless and shrill, Sacha Ardilly and Anne-Sophie Bowen-Chatet turn in beautifully textured performances as the children in this broken home, and their relationship with Arieh Worthalter’s Marc adds real depth and humanity. There are some truly beautiful moments here, which only become more heartbreaking in contrast to some of the film’s more dramatic moments. That being said, it’s the Vicky Krieps show and Amalric seems to not only know this, but embraces the actresses many strengths.

An actress of remarkable urgency, Krieps is heartbreakingly human here, giving a performance that matches Amalric’s icy cold mood while being in tune with the characters clear anger and grief. It’s a vulnerable, skin and bones performance that feels all too rare in today’s soulless cinema landscape. The pair know when there is real, genuine catharsis, and rightly leans into it, particularly at one moment near the film’s conclusion. Amalric is also tuned in the occasional bursts of beauty that come through our lives. The film’s cold energy very much permeates throughout the proceedings, but there’s a richness to some shots, even some costume choices, that adds depth to the film’s fairy-tale atmosphere. Even simple shots like a father cleaning up after a party and locking a door, with the rich blue of dusk bursting through every crack available, that seems almost dream-like in its beauty. A film of real humanity and maturity.

A film of theatrical origin, actor-turned-filmmaker Mathieu Amalric turns in an adaptation of Claudine Galera’s I’m Coming Back From Afar that’s maybe his most cinematic work to date. Driven by a collection of brilliant performances and a muted, cold color palate, Hold Me Tight is a melancholic lamentation about the human relationship to loss and grief. It’s also one of the year’s best dramas and home of maybe the best performance yet in 2022.