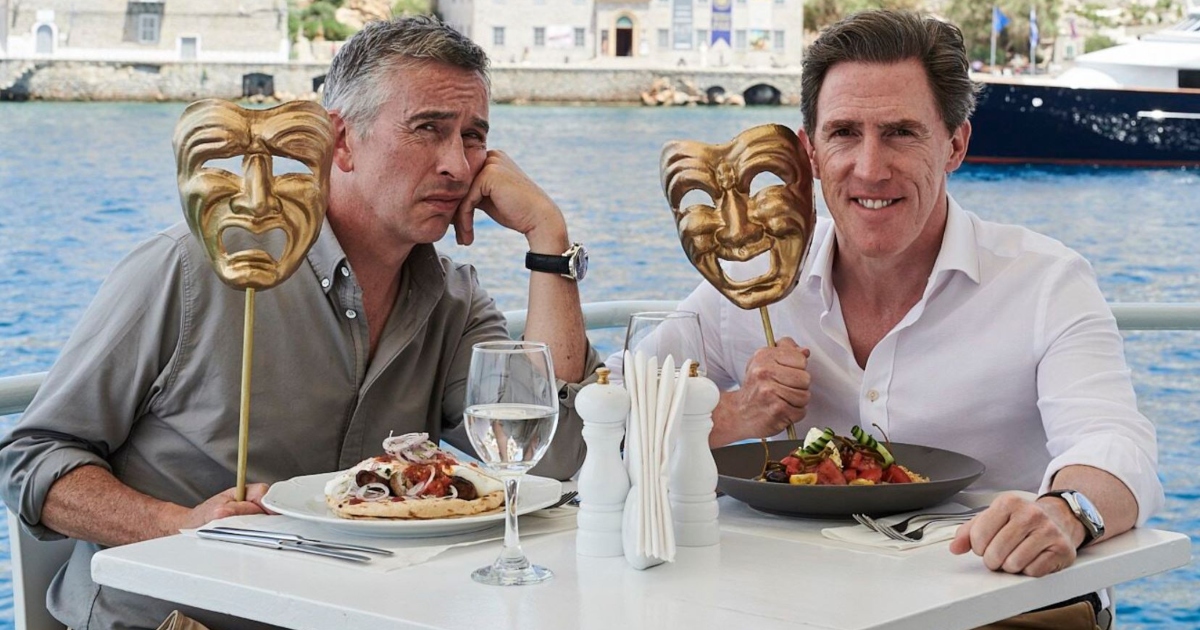 When one thinks of a “franchise” these days, visions of men and women adorned in capes fighting a random grey CGI monster come to mind. Very rarely does an upstart film come about leading to multiple serialized films sans original IP propping their status up upon initial release. And it’s even more rare that that original series is something outside the realm of action cinema.

What I’m trying to say is that The Trip series is in many ways a one in a million type “franchise.” A full decade ago, director Michael Winterbottom teamed with comedian/actors Steve Coogan and Rob Brydon, tapping the two to play themselves in a lightly fictionalized docu-drama hybrid picture, seeing the pair travel the English countryside to find the best food and beverage the country has to offer. What results is an endlessly funny comedy that’s as hilarious as it is strangely emotional, with knotty explorations of friendship, human connection and the passage of time coming into the foreground.

Textured and completely charming, The Trip would lead to The Trip To Italy and The Trip To Spain, films that would only add to the relationship between Coogan and Brydon, while also diving deeper into the two outside of their connection, particularly Coogan whose thinly veiled reproduction of himself is a heartbreakingly sincere exploration of fame and aging, adding incredible depth to an already deceptively dense comedy. Now there’s The Trip To Greece, a film about ends, a film about conclusions and in and of itself one of the better finales (if it is actually so) to a film series in quite some time.

Greece finds our faithful heroes teaming up one final time, a decade after their first journey together, to travel the same road the one and only Odysseus did centuries before, this time eating and drinking as if they themselves were the Greek Gods. Over six days the pair eat and drink their way across Greece, waxing comedic about everything from Tom Hardy’s voice to, ultimately, what the meaning of life may be. Never not funny, the film is defiantly a comedy, yet with their musings about history, myth, aging and politics all coming about in a seemingly free form exploration of the human experience, The Trip To Greece is both the logical conclusion of one of the great comedy franchises of our time, and also a thrilling and thought-provoking character study about two men facing an end of sorts, and working through that process in real time.

While the addition of a seemingly pompous caveat like the Odysseus connection above may make The Trip To Greece feel strangely pretentious and self important, the beauty of Winterbottom’s latest collaboration with his two muses comes in the slivers of genuine human insight caught up in the jovial banter. Sure, the Richard Burton impressions may give one the idea that this is some trite improv comedy, Winterbottom and his two stars embed within the picture some, often dry, musings about life, love, loss and politics, never once taking itself too seriously therein. “There’s not a lot here,” one of the two stars muses while early on in their journey and he’s not entirely wrong. The film’s atmosphere is a warm and inviting one, which itself makes for an entrancing narrative dynamic once the final act begins to unfold, sending one of our leads into a head on collision with mortality.

Both Coogan and Brydon are quite good here, the former getting much more to do narratively while the latter gets what is likely the film’s crowning moment, an incantation of sorts in the company of his partner as they swim in the sea. It’s a beautiful and strangely moving conclusion to the series, a series that’s ebbed and flowed between self-awareness and self-seriousness, landing somewhere in the middle. A middle that’s both moving and dryly straight-forward.