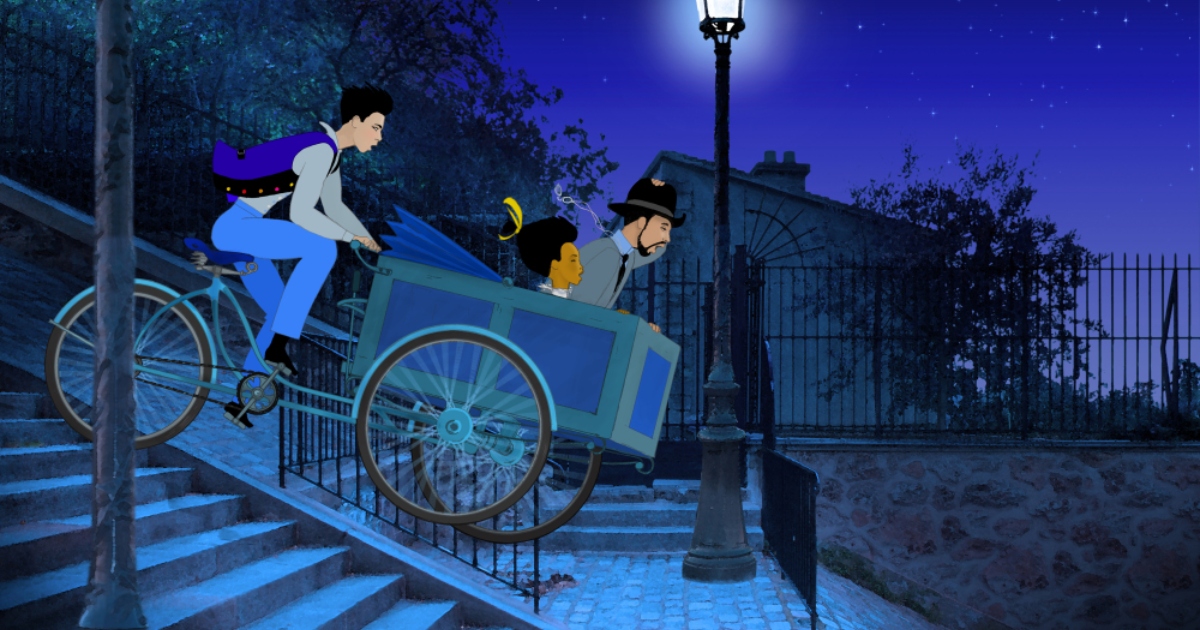 To the every-day fan of animated movies, the name Michel Ocelot may not mean very much. However, for a career spanning over 40 years and feature films, shorts and even television, Ocelot has cemented himself as one of the great craftsmen of animated media on the world cinema stage.

And he’s back with what may be 2019’s most charming, if not the strangest, animated feature.

Entitled Dilili In Paris, Ocelot’s follow-up to his equally entrancing Ivan Tsarevitch and the Changing Princess sends viewers back in time to the Paris of the Belle Epoque, finding the driven and beyond-her-years young woman Dilili new to Paris and traversing a who’s-who of French intellectual and artistic icons. A whip-smart young woman, Dilili almost instantly upon her arrival is drawn into investigating a mysterious crime wave taking Paris by storm, with the enigmatic “Male Masters” as the central figures. Paired with her is a handsome and courageous delivery boy named Orel, and the two dive quite literally into the seedy underbelly of Paris while the greatest minds play background in what is one of the year’s most bizarre and yet oddly alluring animated films.

For much of the film’s roughly 95 minute run time, quite literally two acts, Dilili plays like a glorified point-and-click mystery game that one would have played on a Gateway PC some 20 years ago. Traversing the upper echelon of creatives and intellectuals that called Paris home in the early stages of the 1900s, Dilili feels in many ways like some form of whimsical travelogue meant to educate young children. There’s a dryness to the performances that’s a bit strange, and while the animation style is quite gorgeous, the almost cut-out style of animation plays into the static narrative style. Dilili, and subsequently the viewers, meet figures like Picasso and Marie Curie, all while making their way through a knotty tale of a cult of men that appear to be doing everything they can to subvert any progression for women within Paris.

Then, come a turn near the final third of the film, it becomes something truly ground-shattering. I hesitate to spoil anything so I won’t say much more about the film narratively, but the kidnapping plot comes squarely into frame and turns what has been a pleasant travelogue through a Paris where seemingly every flat is housing someone breaking new ground in their field into something incredibly bleak and in many ways frightening. Ocelot’s film is a decidedly feminist work, a film led by a precocious young girl who defies a new convention at every turn. It places in the fore a story of men who are crippled by the fear of female progression and excellence, quite literally to the point where they strive to make them not just figuratively their slaves but do so through means that are so disturbing and infuriating that come the final sequence, the film is able to muster out of the viewer an emotional response that has very few comparisons. It’s simply as powerful a final sequence as one will see in an animated film all year.

Admittedly an uneven work, Dilili In Paris will be a polarizing film. While Ocelot’s direction in all of its blending of photography and sharp, often surreal, animation is from head to toe gorgeous, the narrative takes a good chunk of time to kick into high gear, but when the action begins to ramp up it becomes a special piece of work. Feminist and anti-racist to the bone, Ocelot’s latest film is a startling, if misshapen, gem that will hopefully find an audience despite a modest release schedule. It’s more than worthy of one’s time.