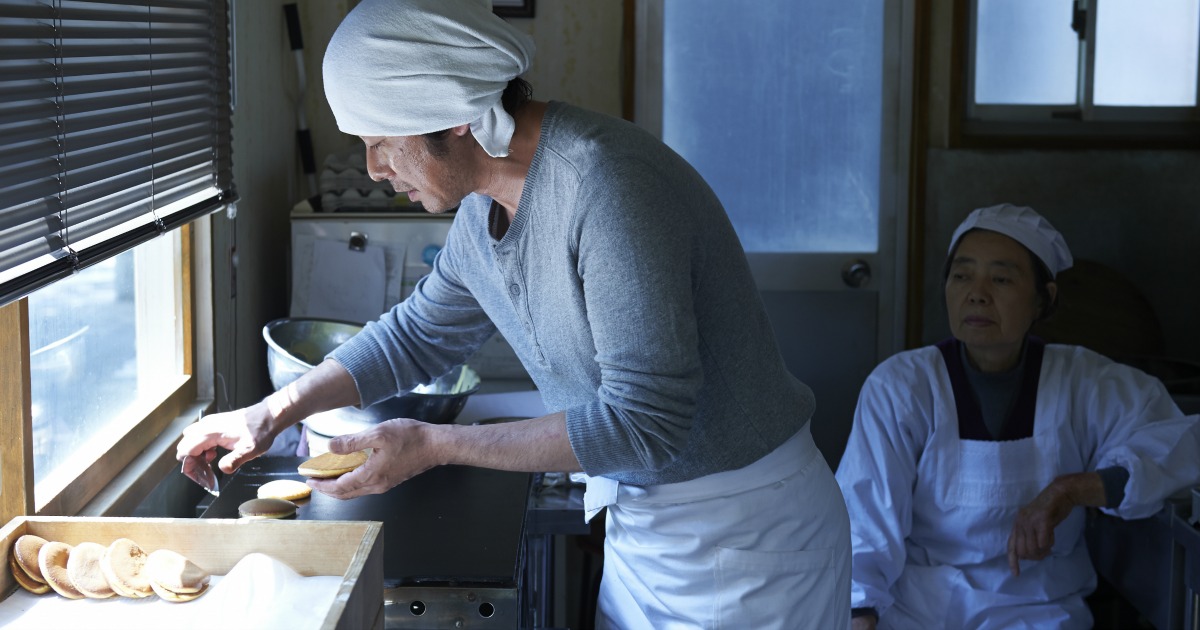 Despite being one of the art cinema world’s most acclaimed filmmakers, director Naomi Kawase is a relative unknown when it comes to even the most studied cinephiles here stateside. Becoming arguably one of the most believed filmmakers at film festivals like, and particularly, the Cannes Film Festival, Kawase has amassed a career spawning some truly intriguing cinematic experiments, that simply haven’t hit a nerve with wide audiences. However, that will hopefully change with her newest, and most accessible, feature.

Entitled Sweet Bean, Kawase takes a decidedly traditional approach to this adaptation of a novel from Durian Sukeagwa, which itself looks and feels like a far cry from her last widely discussed feature, 2011’s Hanezu. The film introduces us to Sentaro, a quiet, unassuming owner of a small dorayaki shop in Tokyo. Dorayaki is ostensibly two small pancakes filled with a sweet red bean paste known as “an,” which is where the film’s title is derived. Business isn’t necessarily booming, save for Wakana, a young girl who frequents his shop. He and Wakana appear to be close, and when a 76-year-old woman named Tokue comes asking for a job, she ultimately talks Sentaro into at least giving her a shot. However, both Sentaro and Tokue get more than they originally bargained for when business explodes due to Tokue’s delicious sweet bean recipe, leading to some truly unexpected places.

Kawase is a polarizing figure in the few circles she’s known. Films like the aforementioned Hanezu, which made quite a splash (for better or worse) at the 2011 Cannes Film Festival, show Kawase as being deeply interested in man’s relationship with nature. Her brand of quiet poetry isn’t entirely seen in Sweet Bean, a film that is still gorgeously composed, yet has a warmth that is unlike much of Kawase’s previous work. Kawase does, however, give us small bursts of her stereotypical earthy poetry in the sequences where we watch Tokue share her bean paste recipe, with the film slowing down greatly to give the viewer stunningly composed shots of beans slowly cooking. It’s the closest Kawase gets to the almost meditative key that many of her other films are played in.

Shigeki Akiyama is the real star of this film, a first-time cinematographer who shoots Sweet Bean within an inch of its life. With a distinct use of focus and depth of field, Akiyama’s photography is crisp and richly textured, particularly in the few moments where the film sets its sights on nature, be it the shots of simmering beans or the cherry blossoms that surround the store. These shots are the highlights of the film, and they wouldn’t work without such superb lensing. It’s Akiyama’s photography that, maybe even more than the solid performances, that will leave the viewer utterly enthralled.

Masatoshi Nagase stars here as Sentaro, and is just the type of quiet, unassuming leading man this picture needs. His relationship with Kirin Kiki’s Tokue is an absolute delight, with her performance being the greatest aspect of this entire picture. Best known for her turn in Still Walking, Kiki (who is the grandmother of co-star Kyara Uchida, who is quite good here as Wakana) plays Tokue with a distinct warmth and humanity, toned perfectly opposite Nagase’s equally quiet performance. For much of the film’s first act or so, Sweet Bean has an almost deadpan comedy feel to it, with the relationship between three generations of Japanese citizens seemingly the focus for Kawase’s new film. However, when it is revealed that Tokue may have once been treated for leprosy, the film takes a decidedly different feel. At once about man’s relationship to nature, the film then becomes explicit in its discussion of man’s treatment of man, a shift that doesn’t completely work but does give the film a touch more weight come its final act.

Ultimately, Sweet Bean is a deeply enjoyable and lushly composed meditation on the admittedly maudlin idea of one’s need to stop and smell the cherry blossoms. While this is easily Kawase’s most accessible work to date, it’s also arguably her most slight. Kino Lorber is releasing this film so it will likely get the widest release of any of Kawase’s films, which will hopefully lead to a few of her previous films finally making their way into theaters or at least onto Blu-ray.

Director Alice Winocour returns with a deeply moving portrait of a mother and daughter relationship on the brink.