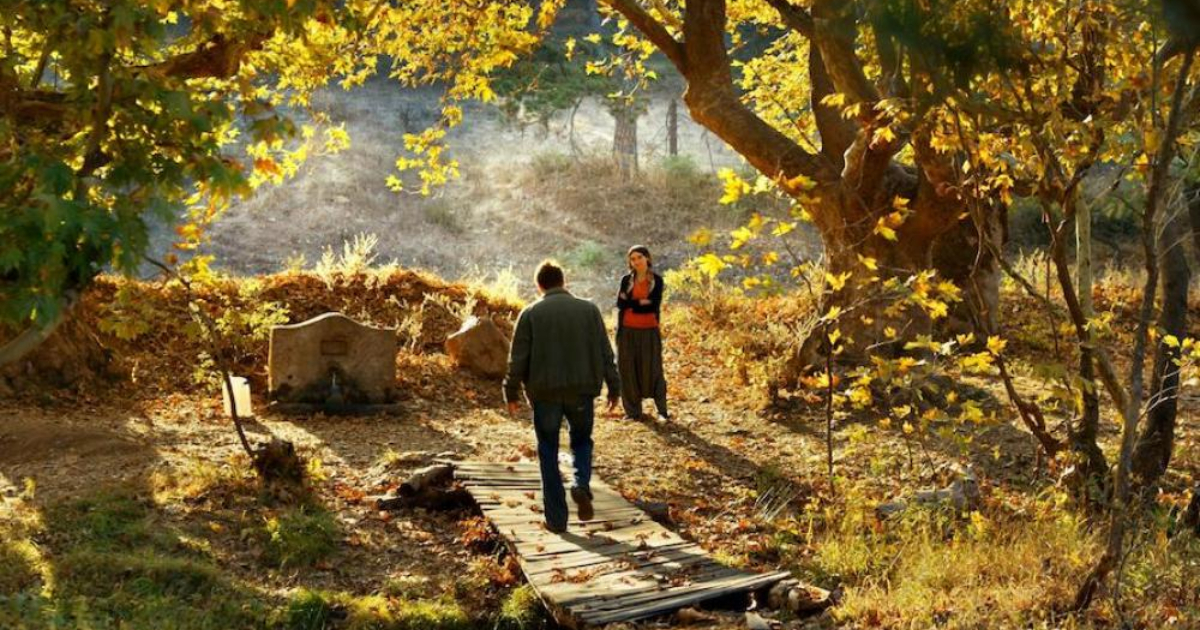 A maker of epics, director Nuri Bilge Ceylan returns to theaters with The Wild Pear Tree, a three-hour father/son drama that’s as ambulatory as it is profoundly moving humanist.

Drawing its name from a manuscript its main character is trying to get published, The Wild Pear Tree introduces viewers to Sinan, a recent college graduate who returns home to find funding for his new book and hopefully a job as a teacher. Restless and entirely uninterested in the traditions of his hometown, Sinan appears to draw from his experiences in rural Turkey where he goes from potential backer to potential backer with hopes of finding someone to finance the first, modest, printing of his collection of short stories/essays.

However, as is the case with the film itself, his collection of short pieces is almost comically hard to nail down, with the historic sites of both Troy and Gallipoli apparently nowhere near his work despite being what his home region is best known for. It also doesn’t help that Sinan (Aydin Dogu Demirkol) isn’t all that enjoyable of a presence, despite being a relatively smart and handsome man. Consistently at odds with his homeland and those within it, he describes himself as someone with a distinct distaste for other people, and won’t hesitate from confronting everyone from his tender mother or a local star author just going about his afternoon at a book shop.

These conversations more or less make up the film’s structure, turning what is a hefty picture into something of a daydream-like epic, watching as Sinan flows from interaction to interaction with long scenes making up the majority of the film. The film’s most dense narrative thread involves Sinan’s relationship to his teacher father, a man who by day teaches classes at a local school and by night gambles away his family’s money in hopes of hitting it big with the next bet. They share a deep connection with one another in a way many rural people of this region do, in that there’s a detachment from society that seems to be passed down generation to generation. Little modernity has made it to the region, even less so in gender dynamics and politics, with Sinan’s father’s favorite pass time being his weekly attempts at finishing a well.

But therein lies what makes The Wild Pear Tree so powerful politically. Instead of making these political statements the film’s main idea and main focus, Ceylan backgrounds these political moments and uses them as the setting for the story of Sinan’s coming of age. When Ceylan breaks from this, the politics become all the more thought-provoking, as when Sinan mentions that many former teachers have been entered into the police force, including one riot officer who he has a lengthy phone conversation with about beating up socialist revolutionaries. We don’t see this political unease but through this hinting of a slow coming revolution, the battle between tradition and modernity becomes all the more potent. There may not be any room for him to make money as an artist, but if he wants to beat up leftists or join the army, he’ll be set for life.

This is specifically where Sinan and his father, Idris, butt heads. Sinan is resigned to the fact that he’ll have to join the army or police force to make any sort of living if he can’t find a teaching gig, while his father may be a gambling addict but hasn’t seemingly gone against what his son describes as a love of nature and animals by losing sight of his humanity. This dynamic is what the film’s primary focus is, and while it will occasionally lose sight of that over its three-hour runtime, The Wild Pear Tree only comes more alive when Ceylan allows his film to wander.

It’s an absolute joy to be in the presence of a master like Ceylan. Never once does he give the hint that he’s lost sight of his film, instead this meandering epic only elevates itself the more and more it allows the viewer to get lost in the world of its lead character. Things like his conversation with a local author only add depth to our lead character and the world he lives in, despite its gradual increase in tension and the almost deplorable sarcasm shown by Sinan as the chat progresses. There’s a clear sense of self-loathing that comes across in these moments, and they’re also brilliantly told through long takes and close-ups that add to both the intimacy and the tension of each scene.This is a brilliantly crafted film, a film that feels right in step with Ceylan’s previous 20 years of filmmaking, seeing him working in the epic type of storytelling that has seen him more often compared to authors like Dostoyevsky than filmmakers like David Lean.

And here is no different. Ceylan is at the height of his powers here, embracing both his naturalistic roots while infusing moments of surrealism throughout the film in the form of almost dream-like interludes and brief bursts of absurdism throughout. Images like a child covered in ants or one moment I hesitate to spoil in the film’s final moments make the film feel almost fantastical, turning the film into something far more brooding than the naturalistic conversation sequences. He’ll also break free of the central narrative, specifically in one sequence that sees Sinan chat with two local men about their relationship to their faith which itself is a real highlight of the film. It’s no wonder that Albert Camus comes up in the film as it is this type of surrealism that makes The Wild Pear Tree unlike anything Ceylan has truly done before.

Clocking in at a dense three hours, the film’s ambulatory structure may make it a bit of a challenging watch for those with little understanding of Ceylan’s storytelling style, but for those willing to go along with the ride, there will be great reward. A devastatingly political work, the film is a quietly told film about father/son dynamics and what generations pass down, that uses sudden bursts of surrealism to become something quietly revolutionary. It may be a challenge, but few things as provocative as this film ever come easy.