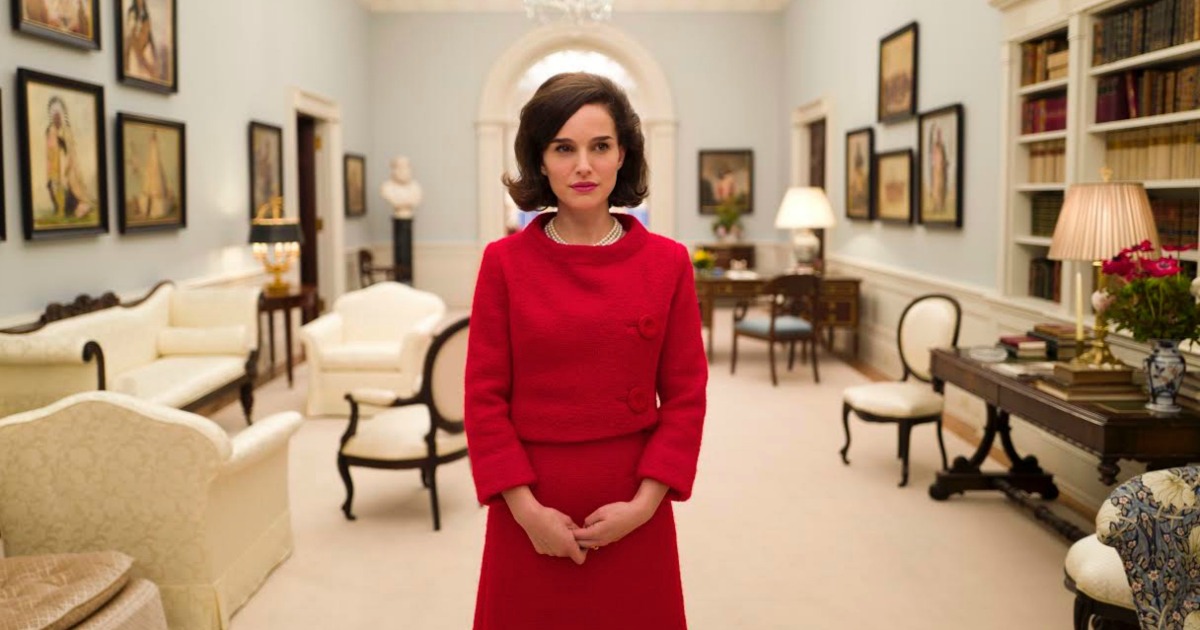 “I believe the characters we read about on the page become more real than the men who stand beside us.”

As trite as this sentiment may seem at first glance, the latest film from director Pablo Larrain finds this focus on mythology and the building of myth in the public eye utterly thrilling. And so will anyone who watches Jackie.

Starring Natalie Portman in possibly a career-defining performance (Black Swan fans don’t find me on Twitter, I love the film as well), Jackie tells the story of a brief moment in the life of former first lady of these United States Jacqueline Kennedy Onassis, the lead up to and fall out from the assassination of her iconic husband. We don’t see her as a child, we don’t watch her near the end of her life, as with any good biopic this film simply focuses on one brief moment in the legendary first lady’s life and draws from it a devastatingly emotional meditation not only on grief and the strength of the human will in the face of trauma, but also one woman’s own interest in history, history-making and the constant conversation we have with those who came before, and will come after, us.

As the film begins, we are introduced to the picture’s framing device. Throughout the film, we watch as Portman’s Jackie discusses the events of her husband’s death and the moments before and after with a reporter played quite empathetically by Billy Crudup. From there we watch as Jackie flashes back to things as small as a TV interview about restoring the White House (more on that in a moment as it’s a Rosetta Stone for understanding this picture) to as emotionally engrossing as her decision to walk alongside her husband’s coffin in a show of strength and courage that is making this writer wipe away tears even thinking about it. It’s a film of deep intimacy despite dealing directly (and shockingly so in its aesthetics) with one of America’s darkest moments.

Doubling back to the aforementioned TV interview for a moment, that sequence is seemingly minor when looking at it for the first time, yet by the end of the picture it becomes an absolute key text when trying to decypher this film. Jackie is seen discussing her interest in bringing back to life the history of the White House, attempting to, herself, have a conversation with the men and women who lived within those confines. Very much interested in the building of mythology (the words Camelot almost become gas-inducing come the film’s final act), Jackie is as much interested in building up her own story with the reporter following her husband’s death as she is aware of her actions on a global and historic level in the moments before and directly after. It’s a startling portrait of grief and courage, yes, but it’s also quite interesting on a much different wave-length.

That being said, this is Portman’s show. Be it her nailing of the iconic Jackie accent (an accent that’s almost too impossibly singular to believe an actual person sounded that way) or her knack for understanding just what a specific moment needs emotionally, her presence is muscular and yet absolutely full of humanity and nuance. Portman has been an actress who has ostensibly grown up in the public eye, and yet this feels like a side of the actress we have yet to see. Be it her emotionally bereft moments shared with the reporter throughout the film, or the strength of will shown in the film’s final act, she’s at the very top of her game here. Jackie is a role that needs great nuance and emotional depth, and Portman turns what could come across as a simply one note performance into something so startlingly lived in and humane that it becomes almost uncanny. It’s her show, and while an actor like Crudup is great here in his own right, Portman’s performance almost even overshadows director Larrain despite him doing remarkable work himself.

Larrain is a filmmaker best known for pictures like No and the third of his 2016 trio (along with fellow December release Neruda) The Club, yet truly outdoes himself here. With brief nods to films like Primary, what with an almost claustrophobic handheld sequence of the Kennedys exiting a plane when landing in Texas, he is also in a way in conversation with this mythology, just on a different level and to a different extent. Much of the film is told with a free flowing camera, that splits between an almost classical style in moments of public show and breathtaking intimacy in the moments shared only with Portman’s Jackie. It’s a gorgeously nuanced portrait of grief and legacy, and Larrain’s direction is absolutely superb here. The central act of violence is shown in gruesome detail, yet done with such humanity that it is as devastating emotionally as it is brief in actuality. As much as Portman’s lead performance is a tour de force of nuance and humanity, Larrain’s direction is a show of mastery in mood and atmosphere. Toss in some great work from beloved photographer Stephane Fontaine and a score by Mica Levi that will be the subject of classes in film schools across the planet for decades to come and you have a film that absolutely can not be missed.