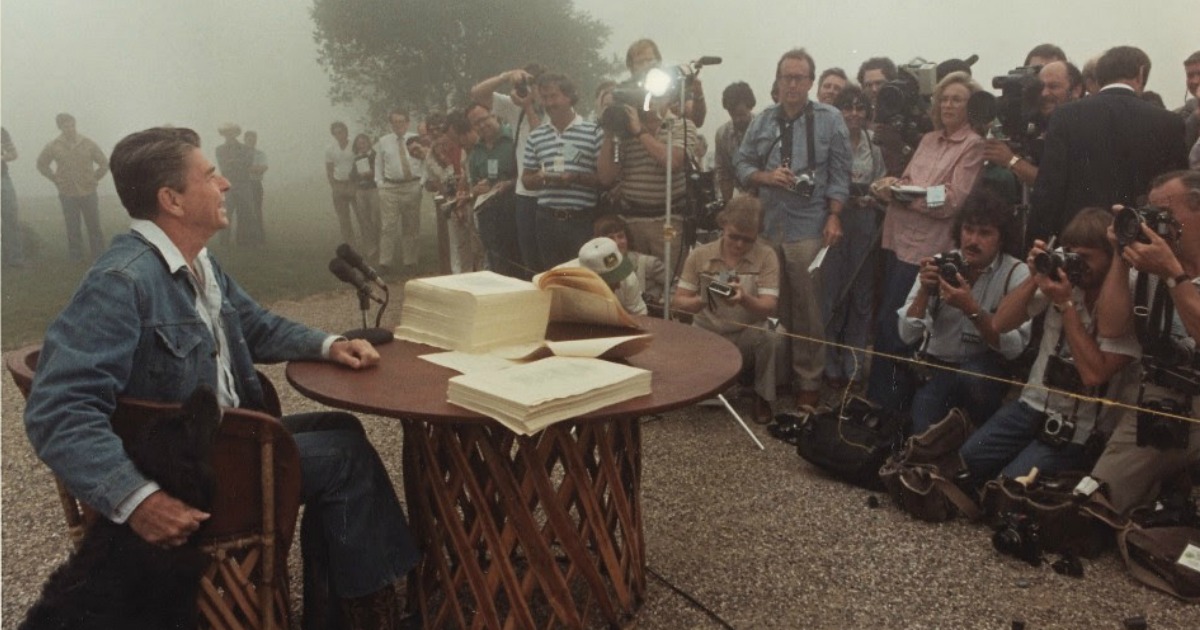 Seen as a God figure in many Republican circles, former President Ronald Reagan may not seem like an apt comparison to our current Commander-in-Chief, until you leave the realm of any real policy discussion. Himself, like Donald Trump, a performer at heart, Reagan was ultimately able to not only transcend that and become a beloved political figure, but use that to his own advantage.

This is ostensibly the thesis of the latest film from directors Pacho Velez and Sierra Pettengill’s, The Reagan Show. Told entirely through archival materials that include both actual news broadcasts as well as videos produced by the White House and Reagan’s staff, the film takes a hard look at the president’s use of media and public relations to not only get him into the good graces of the country writ large, but also to help combat one of his greatest rivals, Soviet leader Mikhail Gorbachev.

It may have been a different time, as seen through the seemingly lo-fi analog video and dated clothes, yet the players are relatively the same. A president driven by ego staring down a Russian leader telling his supporters that he’ll lead in the effort to “make America great again.” Fueled by half-witted, reactionary efforts to fight the perceived issues ailing this nation, Reagan’s administration is a controversial one, but also one that forever changed the way we as a nation, and the world more broadly, views our elected officials.

The beauty in The Reagan Show is that it isn’t so much bipartisan but simply void of partisanship entirely. Clearly a meditation on an evolutionary presidency, Pettengill and Velez have little interest in the actual nuts and bolts of the administration’s policy, instead simply looking at the moment in which the President went from simple elected official into something of a global performer. From this moment forward each President would ultimately have to deal with new technology of sorts, including the left’s version of Reagan, Barack Obama. In a year there could easily be a film crafted entirely out of social media pieces or YouTube clips or the like, showing how this specific administration harnessed a new medium to further their message.

It’s also a weirdly compelling insight into Reagan as a figure himself. The picture opens with him waxing philosophic about the merits of being an actor in the White House, only to watch as he takes an almost actor-like approach to his administration’s appearance. Where comparisons between he and Trump end, there’s a professionalism to Reagan’s performance art as Commander-in-Chief that is both deeply upsetting and yet oddly reassuring when taken against today’s climate. There’s particularly one telling sequence that sees Reagan fussing over every attempt to get the right pronunciation of a Russian phrase that is both quietly charming and also stiff and off putting. It’s a profound insight into the artistic process of a man who assisted in turning political theater into what it has ultimately become today.

And ultimately, through all of this, the two directors here crafting these sequences through superlative editing make an absolutely magnetic piece of non-fiction filmmaking. Briskly paced and consistently captivating, The Reagan Show is a poignant statement that doesn’t seem to be getting any less powerful as the years begin to pass.