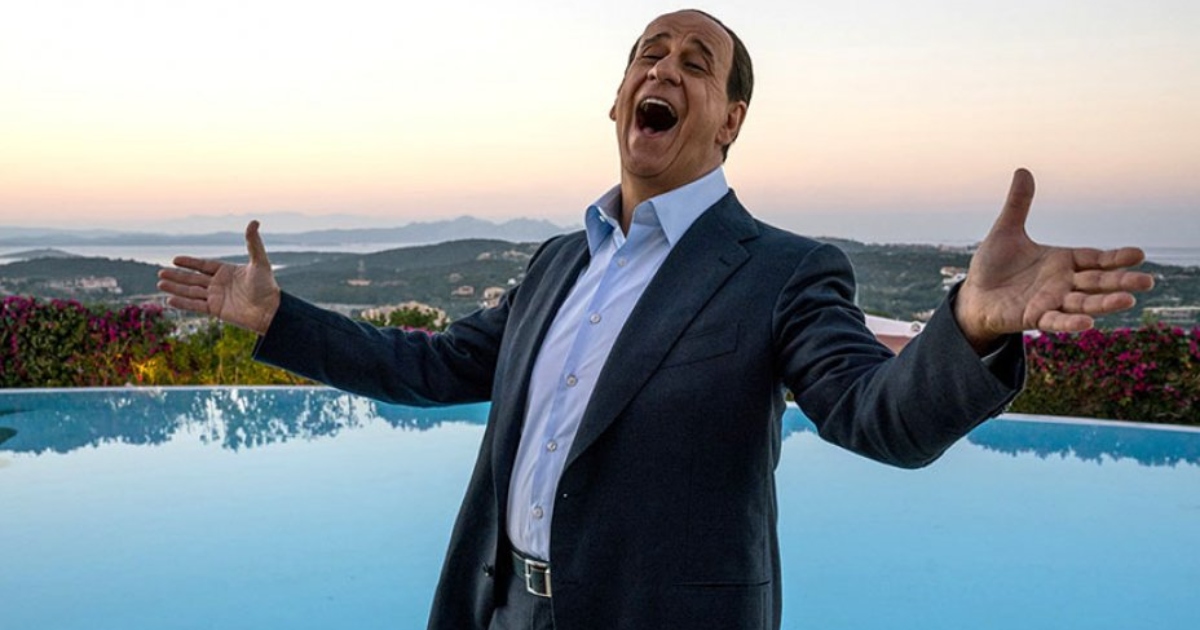 In Loro, Oscar-winning director Paolo Sorrentino has seemingly discovered the story that he was put on this planet to tell. A manifestation of much of his project to this very point in his career, Loro finds the Great Beauty director diving into a world he appears to be endlessly fascinated in, one of empty luxury, men incapable of aging and the fear that comes with it.

A sort-of biopic of controversial Italian prime minister Silvio Berlusconi, Loro stars Toni Servillo as the once disgraced, now revived(?) politician, who becomes the white whale for an ambitious young man named Sergio (Riccardo Scamarcio) who won’t stop until he’s on top of the world. A hyper-stylized portrait of a type of masculinity that today is as toxic as it is ever present, Loro sees Sorrentino at something of a crossroads.

Clocking in at a dense 157 minutes, Loro is frustratingly uneven. Originally set as two features (as it was released in Italy), the single cut of the film released here in the states on September 20 is something of a mess. So clearly constructed as two separate narratives, the opening half of the film finds Berlusconi as something of a mysterious figure, spoken about with reverence but rarely ever seen. Instead we get a hustlers origin story of sorts, introducing viewers to body-peddler Sergio, as he makes his way through the political ranks while giving lusty old men access to beautiful young women. This is the film’s most visually impressive sequence, an hour-plus of percussive editing that finds Sorrentino at the very height of his powers.

Sorrentino’s right hand man, cinematographer Luca Bigazzi is here once again as DP, and the images in this first novella of sorts are rapturous. Taking Sorrentino’s aesthetic to its logical conclusion, this segment is a hedonistic look into one man’s search for power set amidst but not directly referencing a political world that’s taken the globe hostage. From the energetic music choices to the lush framing and impeccable production design, everything about the front half of Loro is compelling in a way the back half simply isn’t. While performances may, across the board, be quite good, Scamarcio is a captivating presence, and his seeking out of power at any and all means in a world of grotesques is something strangely compelling in a world where the US President sees his lackies begging to be next in line for a plum political office.

So, once Berlusconi comes squarely into frame, Loro oddly enough begins to suffer. It’s always less interesting watching people retain power that seek it out, right? A relatively dim rumination on .1% corruption and excess, Loro is at its best when it allows the incredible performance by actor Toni Servillo to take hold. A textured, lived in performance that feels oddly out of place in the otherwise almost surreal Loro, Servillo is at the top of his game here giving a supreme level of humanity to the man/myth that Berlusconi has become. Or maybe not humanity, as its not something I think Sorrentino is actually interested in in any way, but some form of liveliness. Servillo’s Berlusconi is nuanced in a way that almost nothing else in the film appears to be. Sorrentino seems so profoundly enraptured by the lives these men and women lead that any actual commentary that he attempts to dive into is lost amongst the sea of beautiful bodies that all but glorify this type of lifestyle. Lacking the satirical bite of a Wolf Of Wall Street, Loro is a lushly composed, toothless bit of satire.