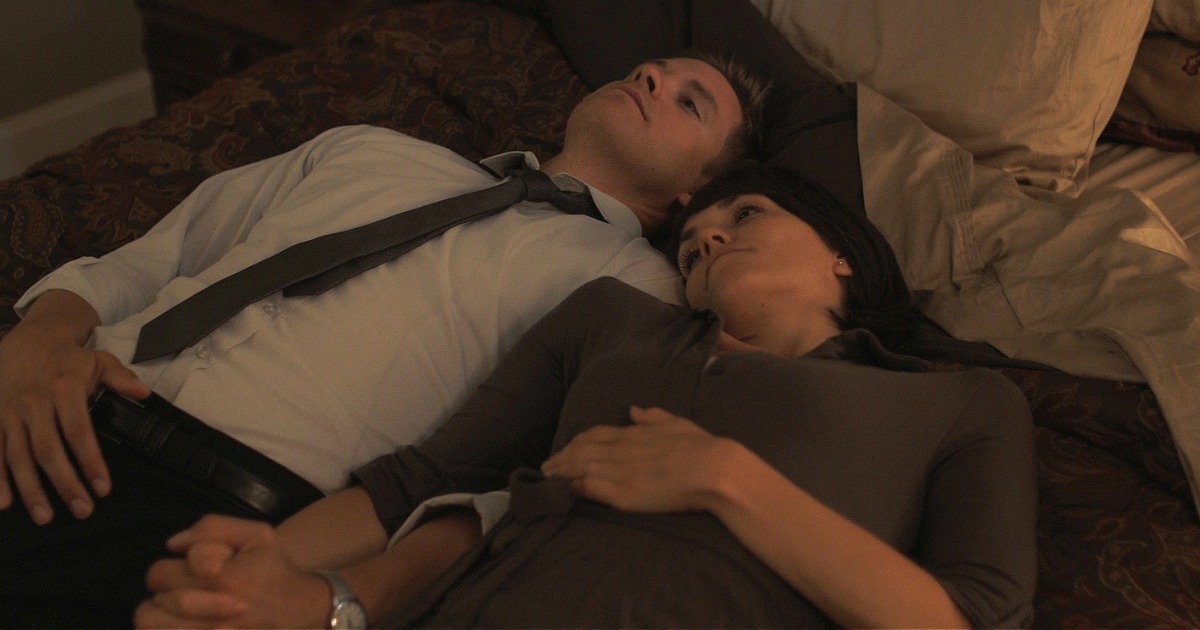 It may be a cliche, but then again, most cliche’s have become such over the years due to their undying universality or truth. It may be a cliche, but a person’s life is not told by the minute, hour, day, year or whatever other structural time telling device you choose to use, but by moments. A person doesn’t find their life told moment to moment, or minute by minute, instead, a life is lived moment to moment, with a person’s evolution never quite ending.

This is the core thought behind the new drama from director Paul Harrill. Entitled Something, Anything, Harrill’s new picture introduces us to a young woman, who we first meet as she says yes to the man of her dreams and his proposal of marriage. As we see during the film’s opening credits, they go from fresh faced newlyweds to a loving couple expecting their first child, only to see their plans change forever following one fateful night. When this tragedy forever breaks their respective plans for their collective future together, the woman, Peggy, is changed forever. When she turns to her spiritual side for guidance, her life is never the same. This Harrill’s debut feature film, Something, Anything is a stayed, quaint look at faith and the impact tragedy has on a person’s life, that is as quiet as it is relatively trite and cliche-ridden.

Structurally, the film plays out like a moving portrait of one person’s life at a crossroad. Superficial in its discussion of its central themes, writer/director Harrill very rarely digs deep in his discussion of faith and consumerism. Briskly told over 88 minutes, the film is at its very best when deciphering why its central marriage is failing and how the main dramatic moment, which itself occurs roughly ten minutes in, became the straw that broke the camel’s back, if you will. We never become privy to the central character’s more important moments, like her actually walking away from her marriage or her telling her manipulative boss that she no longer plans on working for her. Instead, the film loses itself in a turgid narrative web involving a man from her past coming back into her life as a saving grace of sorts. With a final act that feels far too maudlin and melodramatic for its own good, the film fails to truly spark anything stimulating within the viewer, at least past the initial distress we feel when the central dramatic moment occurs.

However, while Harrill’s screenplay may be relatively minor, his direction is far from it. With beautiful photography from cinematographer Kunitaro Ohi, the film is natural in its beauty, and told through a series of timid and beautifully quiet moments. From the montage that opens the picture to a moment in the final act involving fireflies, the direction and photography here is top notch and really engages the viewer. It’s an aesthetic that fits the film’s meditative storytelling style, using an editing style that believes in the viewer enough to let him or her fill in the film’s more dramatic moments. With its mind firmly set to the heavens above, the film even gets a beautifully contemplative score from composer Eric V. Hachikian, a bit of composition that seems to be omnipresent, but never draws attention to itself, instead opting to be nothing more than ambience for this dream-like story.

It also helps that the film gets a rather fantastic lead performance to rest its dramatic beats on. Leading the cast here, as Peggy, is Ashley Shelton, a relative unknown really making a mark in her first major on screen role. While the film, and her performance, are relatively quiet and soft spoken, there is a genuine truth and vitality to her turn here, a performance that is magnetic and assured. The film doesn’t do her many favors, opting to leave much of the narrative’s real drama on the proverbial cutting room floor, but Shelton elevates the material by having a decidedly palpable energy and liveliness to her performance, a truth hiding behind her eyes that helps the viewer engage with this otherwise slight piece of drama. Bryce Johnson co-stars here, and while he and Shelton share the occasional moving moment, it’s Shelton’s show here, something she proves to be quite up to.

Overall, while the film itself is a slight piece of dramatic storytelling, Harrill is a filmmaker with a distinctive directorial voice that is as contemplative as it is engaging. Driven by a great lead performance that brings a great deal of heart to a relatively quiet and meditative picture, Harrill’s debut film is an indie that is worth a fair chance if one can hunt it down. It starts its theatrical run in New York this weekend.