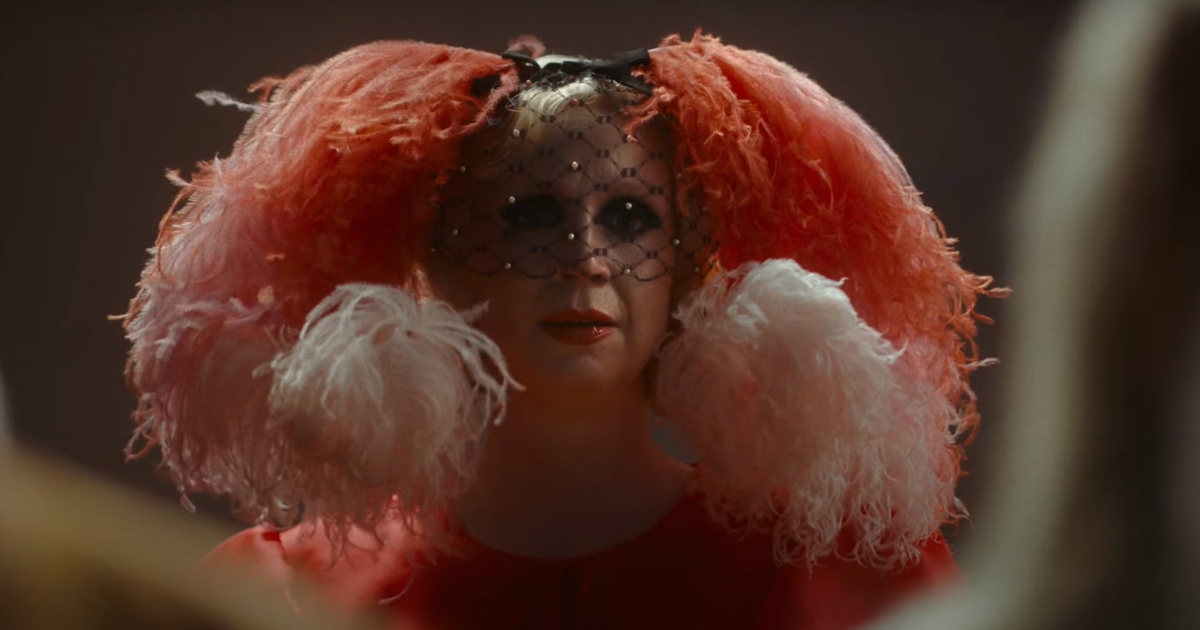 While most filmmakers try to play in either the proverbial “High” or “Low” art arenas, few ebb and flow between the two as perversely as famed kink director Peter Strickland. With films like The Duke of Burgundy and In Fabric turning the director into something of a household name with a very specific set of film fan, the director’s latest may push the boundaries of “your mileage may vary” to an extent yet seen by the auteur.

And thankfully, the film ultimately lands as one of the most exciting and provocative satires of recent memory.

Entitled Flux Gourmet, Strickland’s latest sends viewers to the Sonic Catering Institute, a place of learning whose purpose is bound to “artistic purity of alimentary and culinary salvation.” It’s in actuality a simple coven of gastro-artists whose music comes from sounds heard throughout the run-the-mill home kitchen. Think Nine Inch Nails but the synths are toaster ovens and crackling chicken skin.
Specifically following three artists bestowed upon by a three-week residency at the institute, the film follows the trio’s dissolution, with leader Elle di Elle spearheading the implosion. A film inherently about art and the artistic experience, Strickland’s film subverts this potential series of cliches and tropes by firmly having his tongue in his cheek the entire way. That said, perspective is also quite important here, as these three aren’t seen in the first person, instead viewed through the lens of Stones, the in-house diarist who follows each person as they journey through the residency. It’s a fascinating, novelizing experiment in storytelling, using this disconnecction from the central timeline as a way to amplify the humor and surrealism of the madness around us all.

Performances here are universally good, with Makis Papadimitriou turning in a towering performance as Stones. Papadimitriou’s eyes are vessels for the story, being both clearly sad and yet genuinely spirited. It’s a thoughtful performance that grounds an otherwise arch picture. And few are as arch as Fatma Mohamed’s Elle di Elle. Her interchanges not just with her subdued bandmates (Asa Butterfield and Ariane Labed) but with the head mistress of the institute, played by a deliciously carnivorous Gwendoline Christie, are gleefully over the top, glancing squarely at the film’s core theme of art and authorship (Christie’s Jan Stevens is dying to get her hands on some of the trio’s creative flatulent confections. The performances throughout the film seem perfectly in keeping with the film’s larger conversation with the euro-trash thrillers that Strickland has such an affinity for, giving the film an atmosphere that feels equal parts referential and reverential to these films.

And that extends into the aesthetics of the film as well. Strickland’s direction is rightly muscular, flexing his fascinations with Euro-cinema at every corner. The film’s dryly comic energy extends into the deadpan camerawork, with the photography from Tim Sidell shining most brightly here. Arguably the director’s most self-reflexive and self-referential work, Flux Gourmet plays like a bastard child of the films of Franco and Greenaway, playing into each and every kink of its directors. It’s also arguably his most political. Cultural elites have always been the ire of Strickland’s pen and camera, this film taking that to its next logical extension. A masterpiece of production design, this is a craft-dorks delight, standing as one of the more accomplished pieces of filmmaking yet seen in 2022.

Maybe a pinch too long at just shy of two hours, Flux Gourmet is a gloriously over the top rumination on creativity and authorship that may be a little long in the tooth but, with style to spare, never once over stays its welcome. Strickland’s best film stands as one of the year’s best as well.