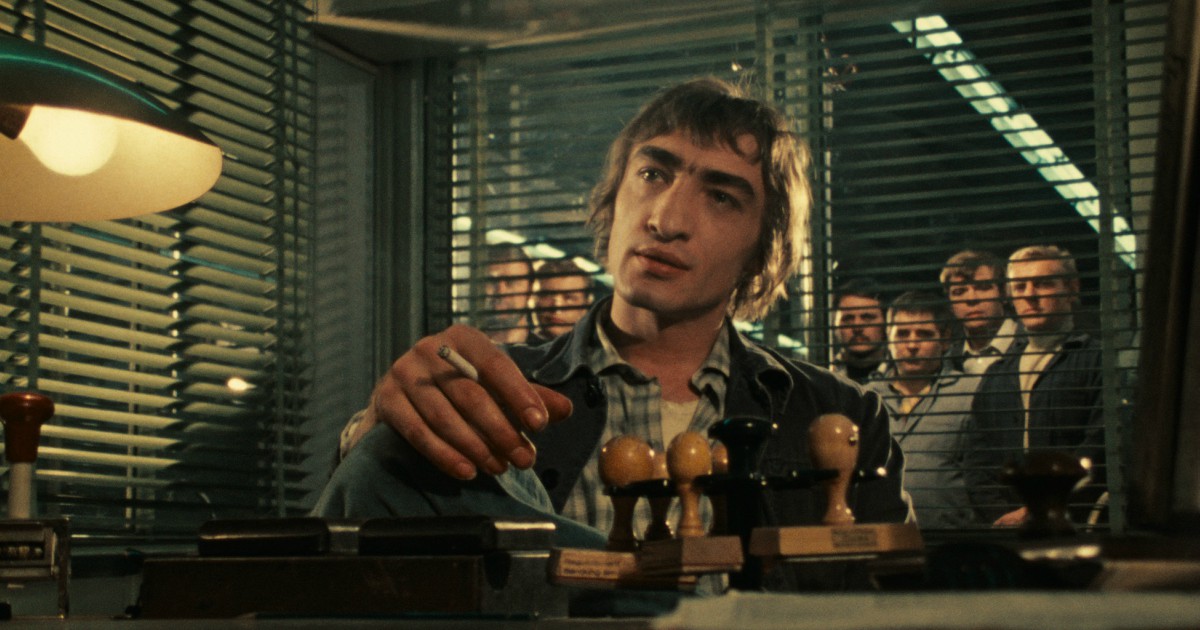 Legendary German filmmaker Rainer Werner Fassbinder could be described as many things. Prolific, surely. Controversial, doubtless. Confrontational, absolutely. However, you’d be hard pressed to call his film and television work light and deeply humane. That is, unless you’re talking about his newly restored masterpiece, the brilliant TV familial epic, Eight Hours Don’t Make A Day.

Making its US theatrical debut this month via Janus Films, Eight Hours sees Fassbinder at maybe his most forthrightly comic and narratively humanist. Tapped by German public television station WDR to make a series about a blue-collar family unit facing the day to day trials and tribulations facing those of the working class in West Germany. Very much rooted in the social realism traditions, Eight Hours has touches of Fassbinder’s more socio-politically minded works, yet never loses sight of the oddly warm and optimistic subtitle of “a family series.”

The series opens on a familial tableau, set against the sixtieth birthday party of Grandma (Luise Ullrich), the ostensible head of the Epp family unit. We watch as children are cracked across the face, insults are slung and champagne is consumed. This sequence sets a decidedly darker mood than what follows, but it’s that sense of underlying darkness that makes the proceeding five episodes profoundly moving. The central story of this series involves factory laborer Jochen (Gottfried John) and a young woman named Marion (the incomparable Hanna Schygulla), who meet while the former is attempting to purchase yet another bottle of booze for the aforementioned festivities. He invites her back to the party, and the two instantly spark up a relationship that soon turns romantic.

These two make up the central narrative of the film, be it their relationship writ large, or Jochen’s ever shifting responsibilities at work and Marion’s coworkers responses to her being a partner to a day worker. At its very best during these sequences, Eight Hours leans fully into the social realism through Jochen and Marion, specifically Jochen’s role as a player within the world of workers rights at his factory, and the relationship between classes as seen through Marion’s interactions with her co-workers at her advertising office. Whereas much of Fassbinder’s canon would have leaned into the strife put upon each party and their relationship as a whole, here the director is working in a much more humane key, making this more so a series about taking hold of one’s life despite any social norms seemingly holding one back, than it is one about how those existential forces are both oppressive and insurmountable.

And it’s not just the story of two star crossed lovers. A secondary tale of romance proceeds out of this party as well, as Grandma, a widow herself, meets widower Gregor (Werner Finck) and not only spark up a romance all their own, but ultimately hit the streets with some half thought through schemes ranging from gaming the housing market to actively breaking laws in an attempt to start up a nursery school. These stories are all connected through this overarching deep dive into the daily trials of a single family, in all the battles they become a part of with not only one another but the world they inhabit. From romantic issues to issues of finances, this is a briskly paced and beautifully made melodrama that is both delightfully emotional and also profoundly political.

At first glance, the tone and mood of the piece will be the biggest surprise. Anyone with experience with Fassbinders oeuvre will find this to be a jarring, almost recontextualizing work, a series that is no less political than his previous and subsequent pieces, but carries with it a sense of optimism that’s entirely singular to his filmography. Sure, there are profound moments of inhumanity, be it a child being smacked in the maw by an adult or even death rearing its ugly head, but the series and its central family never succumb to their perceived lot in life. Classes mingle, protests bring about change and even relationships transcend Fassbinder’s usual sense of love-as-transaction, turning this familial melodrama into a radically leftist meditation on the power of groups and their ability to bring about change.

It’s also simply Fassbinder at the height of his aesthetic powers. Deceptively more muted than much of Fassbinder’s filmography, there’s still style oozing out of every sequence. Each different location carries with it its own lived in atmosphere, and the design is fully realized both cinematically and also thematically. Be it the antiseptic office where Marion works or the far more tactile flat that the family inhabits for much of the series, even the various apartments Grandma and Gregor look at have their own look and feel. Also, Fassbinder’s camera is as lively as ever. The sequences may be relatively static, but framing is everything here, as with each edit and each move of the camera dynamics and character relationships are shifting. Dialogue sequences film the film, and one could completely understand the relationship between each member of the conversation even if the sound was turned off, simply due to Fassbinder’s expert use of blocking and the frame writ large.

There are also real bursts of directorial energy throughout. Fassbinder uses everything from zooms to tracking shots to increase drama and humor, particularly in sequences set outside the home. Every sequence set in Jochen’s factory feels almost ripped out of a science fiction picture, with the machines offering not only an otherworldly-looking setting but a more bombastic soundtrack. Even something as simple as a character’s face being partially blocked by an almost comically large plant or a group of men showering together after their bonuses have been taken away from them, carries with it a deep sense of aesthetic maturity and power.

It also proves Fassbinder as a master director of performance. John and Schygulla are absolutely breathtaking here, particularly the latter, who feels like a burst of humanity every time she’s brought on screen. Their relationship has its own ups and downs, but their chemistry makes every high and low feel not only true but also able to be fixed. The film’s overriding sense of optimism not only comes from the actual plotting of its narrative, but also the strength and humanity that underlie each and every performance. Same can be said for Ullrich and Finck, whose Grandma and Gregor characters feel similar in almost every way. The supporting performances are uniformly great, and even the smallest of characters are given moments of humanity and even outright redemption, giving this series a far more epic sense of narrative.

Now, as this makes its US theatrical run and has already arrived on home video in the UK, where does this go as a pending release by The Criterion Collection? The series was cancelled before its final three scripted episodes could be produced and aired, and an English translation of these episodes is still being anxiously awaited, should they be the leading supplement for the pending Criterion release? This is the ultimate question here. Would they add a more fully realized look at what Fassbinder would have done with his completed work? Or would they simply add extra-textual material to a piece that, in its current form, stands as a completely singular and truly brilliant vision from a prolific master? Hopefully we’ll find out what Criterion thinks soon, as this will absolutely become one of their banner releases the moment it hits store shelves. It’s truly a worldview-changing piece of visual artistry.