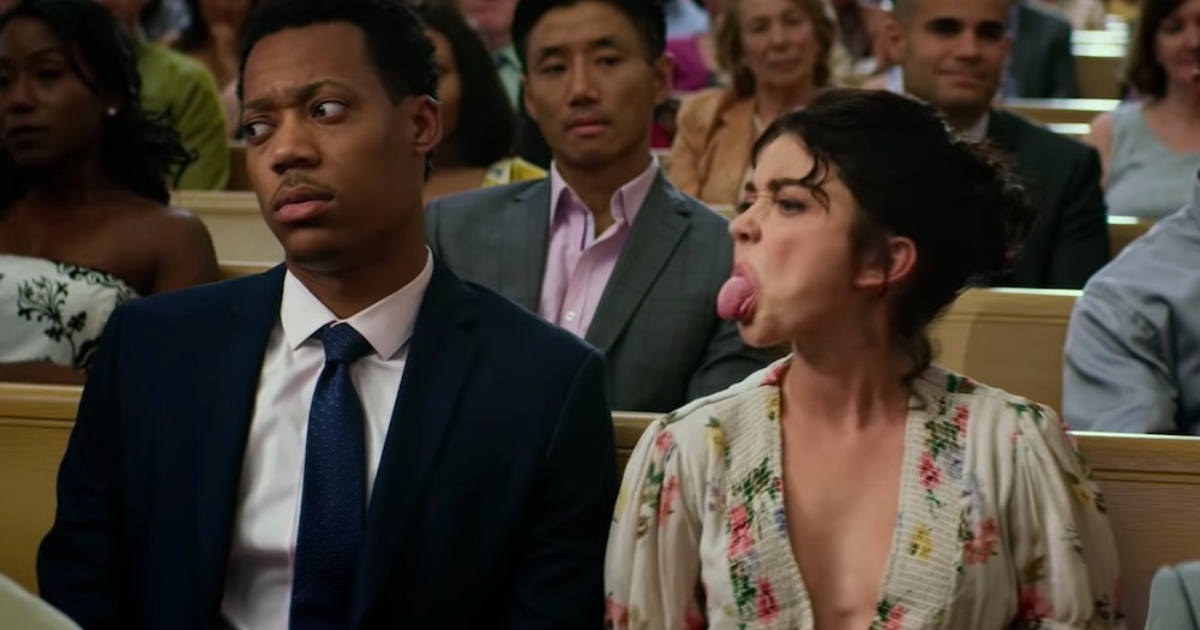 One can’t go too far down any Film Twitter rabbit hole before coming across some variation of the sentiment that “they don’t make [insert genre] like they used to.” Westerns are, admittedly, relatively non-existent, and films like the romantic comedies that many younger cinephiles once mocked but have since become some degree of nostalgic for are being relegated to whatever streaming service is in vogue at the time you’re reading this.

However, with this comes complaint comes the fact while they’ve become harder to find, they aren’t as rare as one would believe. Take The Wedding Year for example.

Directed by Legally Blonde helmer Robert Luketic, The Wedding Year is a relatively small little film, a stock romantic comedy that hits every note with just the right amount of acumen that despite its modest means it becomes something of a breath of fresh air in what is about to be a very serious fall film season.

The film stars Modern Family breakout Sarah Hyland and Dear White People star Tyler James Williams, as two seemingly self-assured young people who, despite their views on what their future holds, find a deep connection after a hook-up and spark quite an intimate relationship. Hyland’s Mara is a self-actualized young woman who, born out of a home that saw a less than healthy relationship fester between her parents, finds commitment to be something akin to a joke. On the opposite end of the spectrum is Williams’ Jake, an equally mature young man who despite being a man of his own devices, find his conception of his future to be rooted heavily in the same tradition as his parents before him. However, “the future” is thrust to the forefront of this relationship as, after finally getting to a point where they both are completely sure of their love for the other, a year of wedding ceremonies hosted by friends and family are set to test everything they thought they knew about their partner.

As is Luketic’s want, The Wedding Year is a handsomely made piece of entertainment that’s incredibly thin, and yet utterly engrossing despite. Flowing at a pace just a bit quicker than a jog, Lucketic’s film is a trope filled rom-com that takes a fine screenplay from writer Donald Diego and takes all the classic beats it riffs on and elevates it with a level of craftsmanship that may not break ground but is so polished that it becomes quite compelling. A film oozing sincerity out of ever pore, The Wedding Year feels of an oddly mid-00’s vintage, the type of heart-felt, if unremarkable, middle-brow comedy that at 90 minutes becomes something that most films in 2019 couldn’t manage to be, a “great hang.”

Hyland is the real star here, taking on a role that’s as old as time, yet doing so with a manic energy that helps evolve the cliche somewhat. Her energy is absolutely captivating, and her chemistry with co-star Tyler James Williams is tactile and feels oddly genuine. Sure, they’re both beautiful people with incredible screen presence, but as they go through the prototypical romantic comedy will-they-won’t-they, each test of the relationship feels strangely true and compelling. The film is absurdly thin, like holding up a newspaper to a spotlight, yet the performances are so in tune with the film’s strange sense of sincerity that the final act, in all of its telegraphed cliches, becomes a moving crescendo to a film that cinephiles have seemingly been begging for for the better part of a decade.

That said, nostalgia is no sole reason to go see a film. The exact film that a service like Redbox was born to promote, the beauty of The Wedding Year is that, while it’s getting a limited release that won’t help it in its hopes of being a bellwether for a return of rom-coms, it’s the exact film that one would find at they’re local video store and, based solely on the cover and brief logline, spend a Saturday night with a loved one munching on popcorn in front of. Brazenly disposable and wafer thin, The Wedding Year will likely be missed by most while in theaters, yet hopefully this review will be in the back of your mind when it inevitably gets noticed in four months when it hits streaming. It’s rare, in 2019, to have a genuinely good time at the movies and this, in all of its simplicity and cliche, is absolutely that.