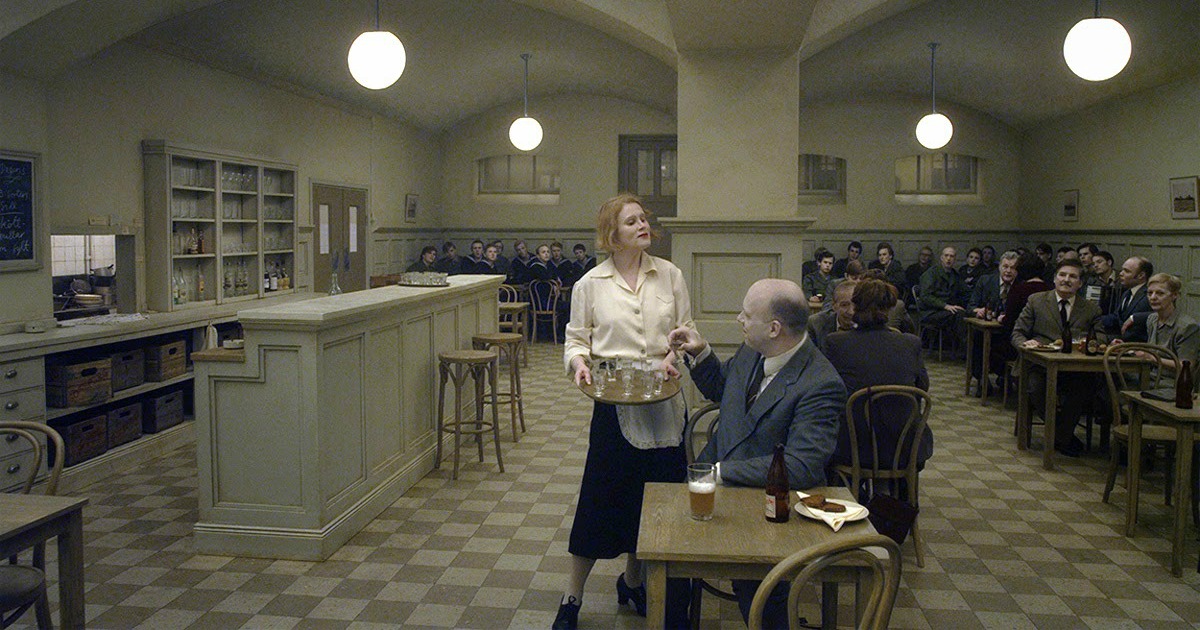 Every film that sees a theater these days feels like some sort of sequel or, heaven forbid, a prequel, to some series of films that is either looking for some fresh blood, or on the shelf far passed its expiration date. And then there is the type of trilogy capper that comes to us from a world cinema auteur like Roy Andersson.

This week sees the release of the third film in the series of explorations into the theme of “being a human being” from Andersson, which began with a pair of masterpieces in Songs From The Second Floor and You, The Living. Entitled A Pigeon Sat On A Branch Reflecting On Existence, this may sound like your standard bit of pretentious world cinema. However, that couldn’t be further from the truth as this dryly comic, bewilderingly beautiful exploration on various themes pertaining to the human condition is one of the year’s most enveloping pictures.

Pigeon‘s central plot is a relatively hard one to grasp, as it’s not so much a connective narrative, but a series of lives we as viewers float in and out of. Like a series of one act plays that we just happen to see stitched together, connected by a pair of traveling novelty salesmen, who are ostensibly our guides through this world of sexually charged dance instructors, a king in search of a good drink and various other absurdist meditations on the momentary nature of human life. Opening with three short tales about death, the film has no issues in finding its tone, as this comedic look at the human experience is a sharply written, gleefully absurd black comedy of the absolute highest order.

The first thing one will notice is the nightmarish aesthetic. The definition of a static picture, the film is in many ways a series of breathlessly composed and designed tableaus, a series of moving photographs that get at the very root of what cinema can be, in its most base form. Framed similarly to a tableau like Jules Bastien–Lepage’s Joan Of Arc, the film uses depth of field to create a distinctively dimensional world, one where the foreground and background each play a role in either the drama or the comedy of a sequence. Take a sequence near the middle of the film for example (I’d say the second act, but a three act structure doesn’t do this film justice). A man is in the middle of an empty street, giving a monologue that, as it progresses, gets less and less engaging as a restaurant window a little deeper in the frame and slightly off to his left is giving us a glimpse into a hectic moment in a couple’s dinner proceedings. It’s a brilliantly comic shot, one that gives us an insight into not only the film’s sense of style and tone, but also Andersson’s brilliant control over his frame.

There’s also connective tissue between these three films (and ostensibly much of Andersson’s work outside of this trilogy of sorts) in the type of performances he gets out of his actors. Giving performances as dry as an over cooked steak, the actors are lushly costumed and made up to look like ghosts of an era long gone, all giving some of the best comedic performances you’re bound to see this year. Lotti Tornros is uproarious as the Flamenco Teacher, and her foil, Oscar Salomonsson have one the film’s lightest and most gleeful sequences. However, it’s nearly impossible to truly point out any one performance as being the film’s standout turn. Nils Westblom is melancholic as Sam, and Holger Andersson’s Jonathan is a highlight as well, for example. It’s a dry ensemble comedy that feels less like an Altman-esque collection of characters and more like a theater troupe experimenting with the powers of cinematic language.

This is cinema at its most obtuse. The result of the simultaneous mainlining of films from names as varied as Ingmar Bergman and Harold Lloyd, the film carries in its DNA both the introspective meditations about humanity that the Swedish auteur, as well as the gut breaking gags of any great silent comedic star. Despite being bizarrely structured and hard to initially engage with (especially for those not familiar with Andersson’s work, which is a high number likely as his canon is relatively hard to hunt down), this is a stunning piece of work. Non-professional actors fill the cast here, all trying their best Buster Keaton impression, and while many may not connect with it initially, those who give themselves over entirely to this master filmmaker will discover one of 2015’s greatest cinematic achievements.

Presented to American audiences with producers Alejandro Gonzalez Inarritu and Darren Aronofsky’s stamp of approval, Roy Andersson’s latest film will hopefully introduce him to a much wider audience. Beautifully shot, breathlessly directed and dry as a desert, this darkly comic look at what it means to truly be human is one of the best films of the year, and proves once again that Andersson may very well be one of today’s greatest living auteurs. It may not find much of a mainstream audience, but don’t let the seemingly pretentious title steer you away. You won’t see another film like this, this year.