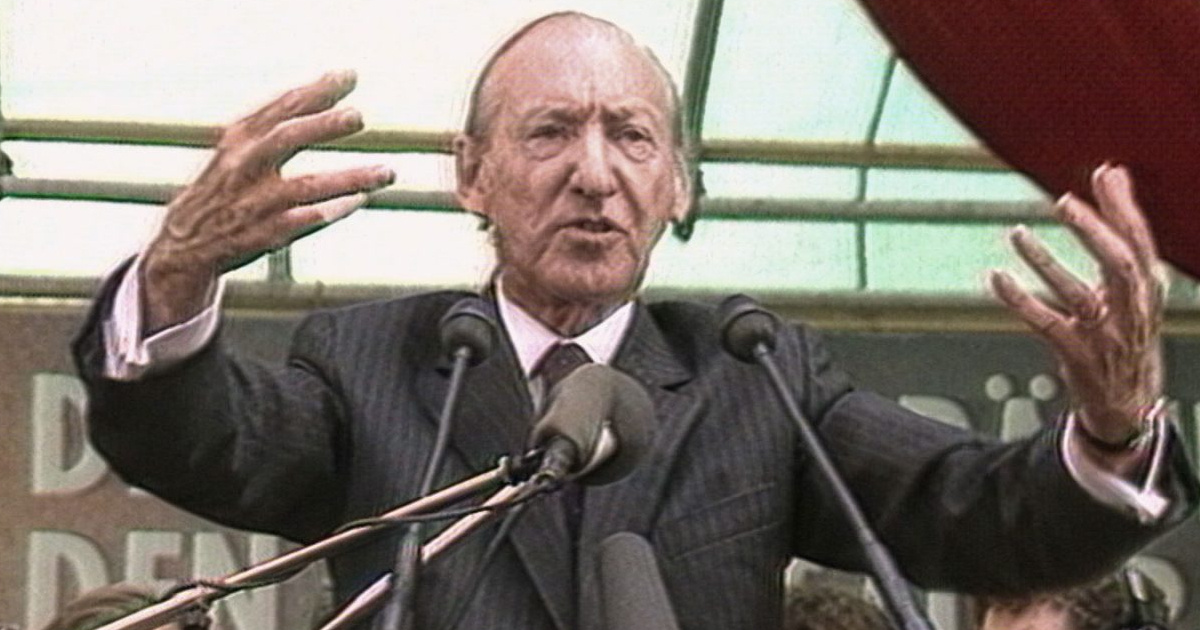 As we get closer and closer to Oscar Sunday, countries from around the world will be submitting films of all makes and models with the hopes of earning the award of Best Foreign Language Film come that fateful evening. However, it’s not every day that one of those countries put their hopes in a documentary feature film.

A category usually made up of the latest and greatest of world fiction cinema, Austria is hoping to buck that historical trend with their submission for this year’s award, a documentary entitled Waldheim Waltz. Thankfully director Ruth Beckermann is not only a talented filmmaker known mainly to those with a rather keen eye on world cinema, but the film proves to be one of the truly thrilling pieces of non-fiction storytelling seen this year.

Beckermann jumps back into the world of documentary following her brilliant and underrated The Dreamed Ones, to tell the story of former UN Secretary General and Austrian President Kurt Waldheim, a diplomat-turned-President who despite being accused of assisting in the deportation of over 60,000 Jewish Greek citizens during WWII was ultimately elected to the highest position in the Austrian government. A mixture of archival footage and footage shot by Beckermann herself at protests during and after his election, Waltz is a harrowing documentary that looks at a political movement now over four decades old that feels disgustingly relevant in the age of Trump and 2018 White Nationalism.

Since the end of the second World War, Austria has proved itself to be a hotbed for the most extreme of right wing political movements and through this film director Beckmermann attempts to bring to light one of the earliest examples of this. Focusing solely on footage from the ‘70s and ‘80s, Beckermann paints this portrait of a country in crisis with a deft, incisive hand, turning this documentary into something more than just a simple piece of non-fiction filmmaking. Despite being a world renowned diplomat throughout the ‘70s and into the ‘80s, once Waldheim declared himself a candidate for President of Austria, deeper investigations into his role in WWII began coming to light, culminating in a scorching piece from journalist Hubertus Czernin claiming that Waldheim’s story of spending his time during the majority of WWII studying following an injury to be false. Leading to an investigation by the World Jewish Congress that led to Waldheim being revealed as a major player in the deportation of thousands of Jewish men and women from the Greek city of Thessaloniki, despite his own claim that this was nothing more than a smear campaign.

Beckermann is at the very top of her game here. The brilliance of this hopefully not overlooked documentary comes in its pacing, as Beckermann’s understanding of proper documentary structure is second to none. Unfolding more or less in chronological order, that may not sound like a captivating watch in today’s ever-evolving non-fiction universe, it does, however, become an increasingly tense and thrilling watch, playing more or less as a political thriller that is both narratively captivating as well as being genuinely timely and prescient on an intellectual level. As far-right politics and white nationalism becomes more and more prevalent in today’s political landscape, this document of a nation’s washing away of its history is a disturbingly pertinent piece of storytelling, showing how one man’s dismissal of facts as nothing more than “fake news” if you will can allow for enough cover to lead him into the highest office in the respective land.

As the US sees its leaders proclaim that there are bad people “on both sides” and take pause before dismissing any support from racist collectives, watching as a bureaucrat some 40 years earlier do similar things, only to also take power is a devastatingly frustrating experience, turned truly haunting by first hand accounting through the potent blending of archival and first hand footage, all set to a pace that’s truly fitting of today’s documentary aesthetic. Taking a sharp knife to both this man’s legacy as well as the institutional circumstances that allowed for not only his rise but his empowerment, The Waldheim Waltz is an unsettling story of one man’s culpability in times of war, and a nation’s allowing of it to be overlooked when considering him for the most powerful position in their government.