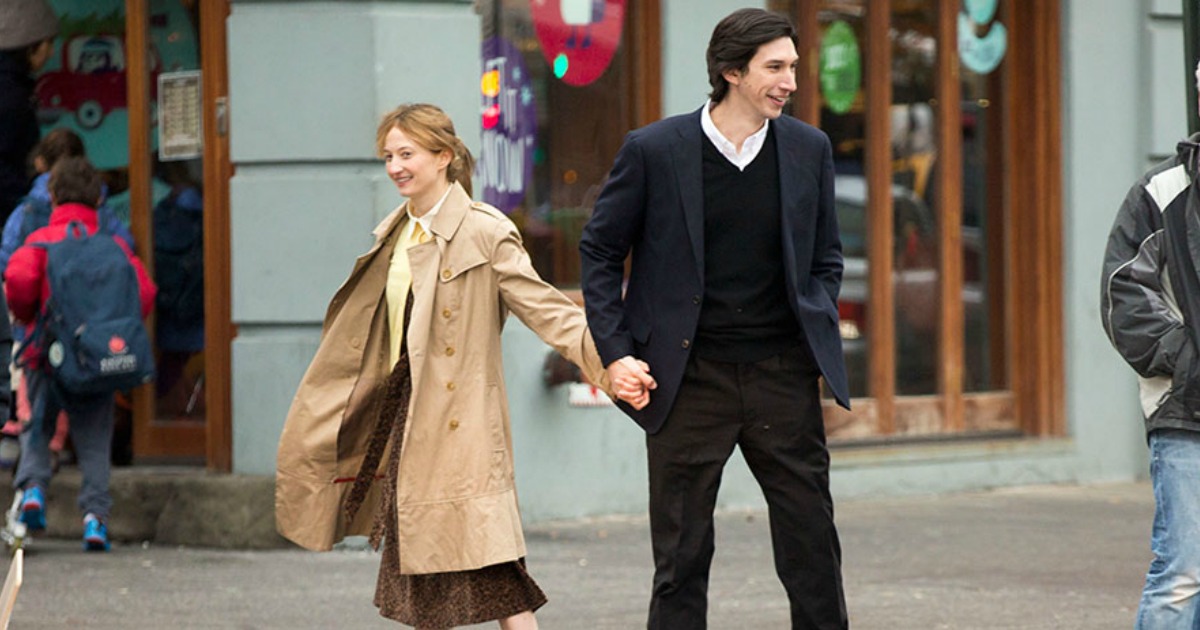 It shouldn’t be said that eating healthy is considered a “trend,” but over the last handful of years the rise is popularity of organic produce, meats, and other foods has reached peak levels. More and more restaurants, even fast food joints, are cutting out genetically altered foods, opting instead for more natural, organically sourced foods for their meals. It’s a truly great change in culture that appears to be here to stay.

However, what happens when the fear of non-organic items, even medicine, becomes the source of obsession? That’s the base level description of a new thriller, of sorts, from director Saverio Costanzo, entitled Hungry Hearts. Starring Adam Driver and the always impeccable Alba Rohrwacher, the film tells the story of Jude and Mina, a couple who we see go from meeting for the first time while being stuck in a Chinese restaurant’s bathroom to ultimately getting married and having their first child. A young couple, the crux of the story takes place following the birth of their first child, and both are quite involved with its growth. Mina is especially involved with what the child consumes, not allowing for Western medicine or non organic foods in the child’s body. At the beginning just grounds for the occasional spat between the parents, things become more and more intense as the child stops growing. With the child’s father fearing for his health, the film takes a decidedly intense turn in the second act, turning this slice of life drama into one of the year’s most distinct thrillers.

Despite being driven by two very good lead performances, the film’s biggest star is director Costanzo. Best known for work on films like The Solitude Of Prime Numbers, the director goes full Polanski with this Repulsion-esque journey into madness. The fears of first-time parents shroud the film in a cloud of uncertain dread, and the script here (while decidedly clear in its support of one character) paints a relationship that turns from loving and all around supportive into one of ever building frustration. However, Costanzo’s script does get at the balancing a relationship needs, with Driver’s Jude initially finding frustration in Mina’s disinterest in adding certain things to their son’s diet but ultimately finding understanding. Even then, however, we see the lies that a relationship going through this level of stress will include, as it is revealed that Jude has been taking their son to a local church to feed him meat whenever he is given a chance. It’s a truly superb tale of obsession and fear, and a solid, if one sided, piece of writing.

But his direction is the real shining light here. Fabio Cianchetti’s photography here is some of the most claustrophobic work you’ll see this year, with haunting fish eye lens shots paired opposite superbly horrifying long takes that give us a glimpse into the ever growing sense of madness overtaking this relationship and this family. The film owes a great debt to the work of the aforementioned Polanski, not only in tone but in aesthetic. The blend of terror and occasional comedic beat is right up the Polanski alley, but the influence comes across clear in the claustrophobic and decidedly raw sense of existential doom found in the Mina character. It’s a towering piece of work from a director who will hopefully make a splash with this new feature.

Billed with a handful of names in its cast, it’s truly a two person show here. Driver’s Jude is solid, and the actor’s naturalism really shines through in a character that is given quite a bit thanks to a very supportive screenplay. The interchanges between he and Rohwacher’s Mina are real and human, particularly in their constant bartering. Give and take is a real thing in a relationship, and these conversations are quite engaging in this film. However, Rohrwacher is an absolute revelation here, her second outing with Costanzo. It’s a breathtaking performance, one that can be discussed as one note in many ways, but is much more nuanced than many will give her credit for. The journey these two characters take from their first meeting to the final sequence is haunting, and it is due to her performance that the film’s sense of dread becomes tactile and palpable. Toss in a great turn from Robert Maxwell as Jude’s mother, and you have a truly fantastic cast that gives us a glimpse into a raw and unforgettable decent into madness.

In a year that’s bound to be the real debut for Adam Driver (a certain franchise in a galaxy far, far away will hopefully launch him into the A-list), this is truly a show for Rohwacher. Driven by her brilliant lead performance and a director who is as assured with his hand behind the camera as you’ll ever see, this is a film that will hopefully find an audience on the arthouse and VOD circuit.