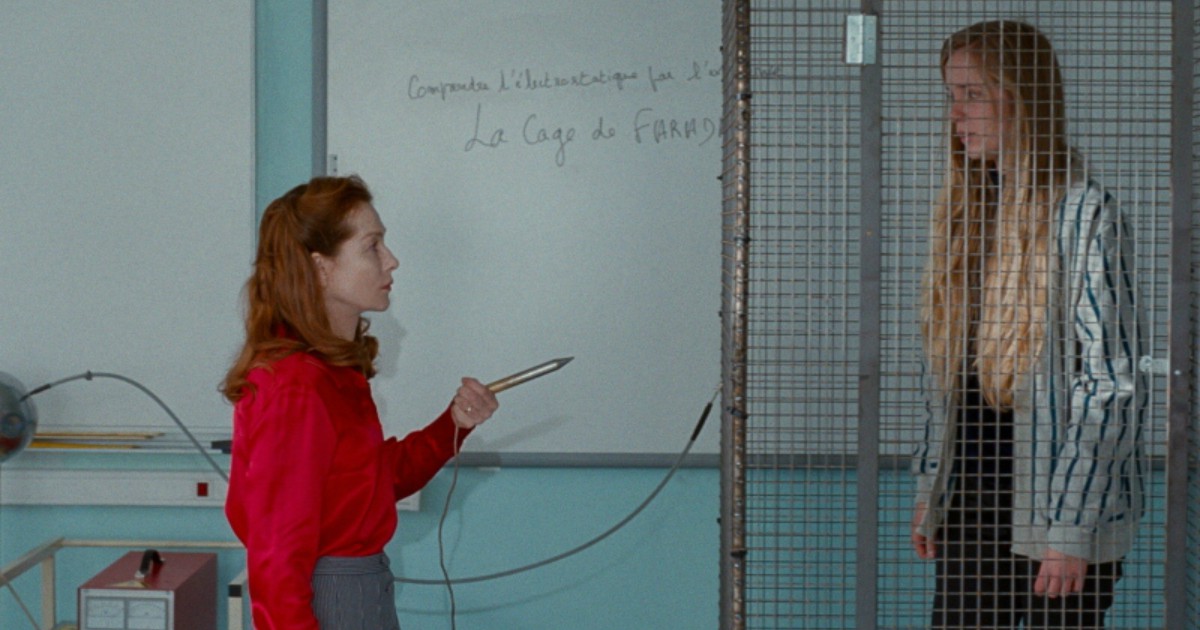 Few actresses have had quite the career that Isabelle Huppert has. After getting her start in film at the beginning of the 1970s, Huppert has gone on to work with directors as talented as Michael Haneke and Jean-Luc Godard, all the while turning in performances that have cemented her as one of the greatest actresses of her generation. Or frankly, any generation, if we’re keeping each other honest. And while it’s hard to call any of her performances her very best, as for the most part they’re varying degrees of brilliant to all-time great, there’s something about her playing a woman given supernatural abilities after being struck by lightning that just makes your heart tingle a little bit more than most screen performances do.

That’s the situation she’s found herself in in the new film from director Serge Bozon, entitled Mrs. Hyde. You’d be correct in assuming that this is a loose, almost jazz-like, riff on the legendary Robert Louis Stevenson story of a similar title, with Huppert taking on two roles as a physics professor who goes from being bullied by her students one afternoon to becoming an almost god-like figure of doom to those who cross her path after the aforementioned act of God. A bizarre, endlessly funny comedy that evolves into one of Bozon’s most deliciously weird efforts to date, Hyde is a lavishly shot look at teaching as an abstract concept, the battle between needing answers and yet not knowing what questions to ask.

While the premise itself may seem patently absurd, it most certainly is and never shys from that, what makes Hyde so delightful is its complete earnestness or more specifically its focus on the life and work of its central character. Other films of this ilk would lean into the fantastical, but to his credit Bozon’s greatest strength is balancing the moments of surrealist fantasy with the film’s classroom sequences, which are where it truly flexes its muscles. These scenes, while giving the viewer a glimpse into the world each of these characters inhabit, and in an almost Kaurismaki-esque manner, Bozon is able to be blunt in his exploration of these lives while never losing sight of the underlying humor that pervades one’s day to day experiences.

Huppert’s character is also an interesting piece of fiction, an exciting spin on the undervalued teacher that is seen throughout this type of film. Her relationship with the thoughtful but ocassionally volatile student Malik (played brilliantly by newcomer Adda Senani), and this relationship becomes the film’s central back and forth, playing as a sort of manifestation of the film’s core themes. Huppert is, for all intents and purposes, a dreadful teacher, with zero control over her students and despite being a seasoned veteran of the classroom, still has no real understanding of how to communicate with her children. This becomes much of the comedic fodder of the film, and while it does become a little monotonous as the film unspools, there are enough wrinkles in the film’s final act that help keep one’s attention. However, this isn’t without purpose, as Bozon’s sharpest knives are for the French school bureaucracy writ large. Romain Duris plays a doofus principle that takes a weird glee in the small level of control he has over the lives of those under him, and as Huppert’s Mrs. Gequil character looks to become part of a governmental group of teachers, there’s a lack of understanding of the purpose of any actions being taken that’s both comedic and rather biting. Ultimately, this lack of real control over one’s lot in life makes the seemingly minor diversions off that preordained path all the more captivating.

Shot on film, Hyde’s color scheme is rich in its use of pastels, with Bozon’s oft-collaborator, his sister Celine Bozon, shooting the picture in a manner that’s at once esoteric and yet weirdly tactile. Very much playing in the same tonal elements as the film’s central narrative, the photography feels not of this world, but one just slightly more arch than the one we inhabit. The night sequences are rich in their use of blacks and the pastels play wonderfully within a stuffy school setting, all used with Bozon’s static camera work to play as something both evoking a sense of naturalism and yet something entirely not of this world. Uneven, sure. But expertly made, without a doubt.