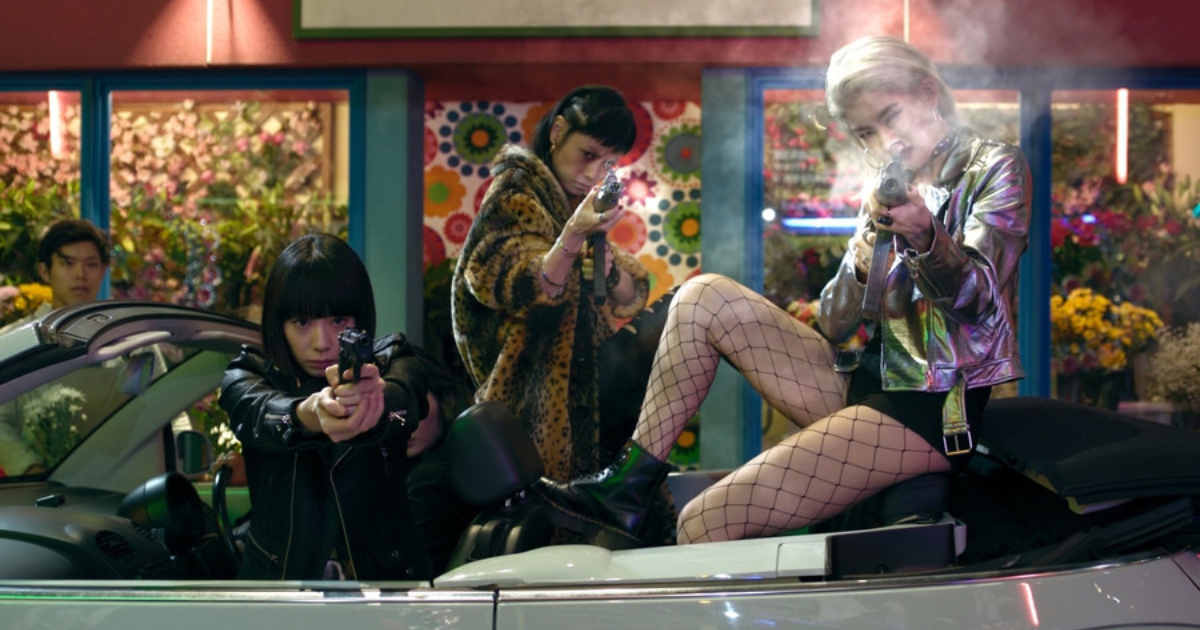 Deep in the bowels of Amazon Prime, one will come across the latest effort from legendary filmmaker/malcontent Sion Sono. A 10-episode series entitled Tokyo Vampire Hotel is Sono’s lengthiest attempt at television, and is yet another in a long line of violent, baroque pieces of pop art cinema from one of cinema’s great bad boys. So why is it at Fantasia 2018?

Well, thankfully for those with less time available to spend watching something, Sono has cut this series down to a paltry 144 minutes and has turned out one of the year’s most flabbergasting horror/action films.

Tokyo Vampire Hotel introduces the viewer to a world on the brink of total destruction. While the majority of Tokyo is unaware of their existence, two warring vampire families set about trying to end, once and for all, a war that has been raging for centuries. Set in 2021 Tokyo, the film takes place 22 years after three young vampires were born into this world against the backdrop of complete planetary alignment. With a prophecy calling for these three Dracula descendants to end this war with the Corvins, their lives are put in grave danger.

Clocking in at well over two hours, this is at once a perfect distillation of everything that has gone on to make Sono one of today’s most interesting filmmakers, and also a glutinous, indulgent action-thriller that isn’t so much uneven as it is endlessly propulsive. Sono is, as a crafter of images, at the very height of his powers here. With pop art design throughout the film’s set work, the photography here is heightened and pops right off the screen. Be it the gallons of blood that come spraying out of hundreds of bodies or the surreal production design, the film is a genuine visual feast. Sono is also an underrated choreographer of action sequences, this being a perfect example as it is all but wall to wall action setpieces. Each sequence is entirely its own beast, with the fight scenes taking place with little editing and in a wide enough shot as to see all the damage being done.

That said, with such an action focus and such a lengthy runtime, the film does become not so much cumbersome as it does almost oppressive at times. The fantastical storyline is compelling enough to hold the film’s girth for the most part, but instead of delving in any real depth into the plight of these burgeoning vampires or the mythology therein, Tokyo Vampire Hotel veers occasionally into the realm of total excess. Concluding with a final act that does elevate the picture into rarified action air, Sono’s film is at times relentless, but that seems to be more due to the fact that the performances don’t hold much weight. Sono’s not been one to make “slow cinema,” but throughout his filmography even his most anarchic pictures have been driven as much by his punk rock style as it has been some genuinely great performances. Here, however, the film suffers from a weak screenplay and a series of performances that can’t quite make the rare quiet moments really breathe.

However, Tokyo Vampire Hotel is a film unlike any you’ll ever see. Almost experimental in its disinterest in slowing down, Sono’s latest film is a non-stop action/thriller/horror picture that is sees its director at the very height of his filmmaking powers. While the script and performances make the action a bit cumbersome, this level of cinematic audacity is impossible not to admire and deeply respect.