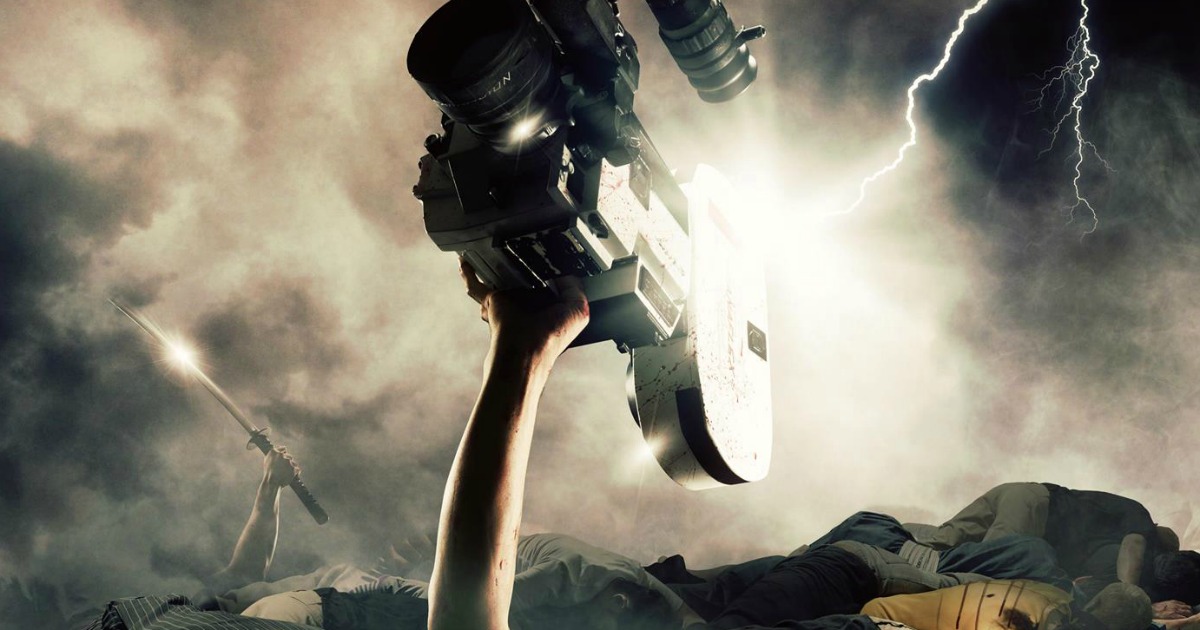 It’s not that rare for a film, in this ever growing digital landscape, to have deep running themes pertaining to the death of physical media and more specifically the celluloid that cinema itself was birthed using. Be it documentaries looking at the specific rise and fall of celluloid in the age of the cloud and cinematic democratization, or handful of fiction films with that theme, that nostalgia, running below the surface, filmmakers across the globe have begun eulogizing celluloid as if it were on its very last legs. That all being said, there has never been a film quite like Why Don’t You Play In Hell?, which itself comes from the one of a kind auteur Sion Sono.

Coming on the heels of some brazen, bombastic and brooding pieces of filmmaking in the form of his greatest film, Love Exposure and the unforgettable Himizu, Sono keeps the aggressive and in your face sense of energy and experimentation, but this time shines his light on a decidedly different set of ideas. A raucous and loving ode to the raw energy of filmmaking and the campy action films he grew up on, this blood soaked action film may very well be the best action picture crafted in this, or any other, decade.

The story goes something along these lines. With stars in their eyes and hopes and dreams of making the latest great Japanese masterpiece, the film introduces us to a group of young filmmakers named the F*** Bombers. Ten years prior to the main narrative starting, we see the young group run into a yakuza fight, only to gain not only inspiration, but a new member in the form of gangster Sasaki (Tak Sakaguchi). Billed as Japan’s Bruce Lee, this chance meeting sends the team’s creative juices into overdrive, however, not everyone in the film is living the high life. Opposite this team is the beautiful Mitsuko, a young mob boss’ daughter who comes home one afternoon to find her home the setting of what appears to have been quite a battle, her mother coming out victorious against a group of gangsters intending on taking her father, Muto’s, life. Fast forward a decade, and we see our main crew on the outs, down on their luck still looking to make their masterpiece, with Mitsuko also struggling to find her spot in this world. Hell bent on being a star instead of just some secondary nobody, her world collides directly with that of the Bombers, as all are brought in to help bring to life a film that would bring honor to the Muto name, in anticipation of Mitsuko’s mother’s release from prison following the attack a decade before. A twisty and thrillingly paced narrative guides this picture, one that is equal parts thematic Pandora’s box and breathtaking action masterpiece that leaves the body count high, the screen drenched in blood and the viewer craving another go around come the film’s final moment.

Sono, with this film, proves himself to be one of the best Japanese filmmakers of his generation. Already cemented as a distinct and singular voice in what is historically one of the most fruitful landscapes in all of world cinema, the glee and passion with which he delves head first into this story is bewildering. Structurally, the film is percussive and in many ways loosely built, but never feels out of place or as if we are being guided down a path by an unsure guide. The characters are tossed around their respective worlds, motivations clearly billed, and the script is really a fantastic and humorous bit of philosophizing from this generation’s great Japanese provocateur. The main romantic narrative here falls a little flat until the final act, but all things being equal, the main love story being told here is that of these men and women and their love of the tactile nature of cinema.

Despite being shot digitally, there is a campy sense of style to this film that seems delightfully connected to that of low-budget action cinema, the type that Sono is so lovingly meditating on here. Opposite the opening sequences showing the passion with which these characters try to make due with their lack of funds (like the use of roller blades as a camera dolly), you have the instant classic of a final set piece, and the myriad of film references that come in the moments between. Imagine the film that would have been made between Game Of Death and Kill Bill (where the references are heavy but never directly named) and toss it in a blender with various party drugs and a year’s supply of Four Loko, and you have something nearly resembling this film.

The final set piece may also be the best action set piece the big screen has seen in well over a decade. Despite being CGI heavy there is an abrasiveness to the final sequence, an extended sequence that finds our lead filmmaking crew attempting to choreograph the final battle between two rival yakuza clans, a sequence that will go down as one of the all time great battles in film. Brought on by the chance for the team to work on 35mm, it is a narratively wonderful sequence, allowing for some of the more moving moments to really breath, and also the glee with which Sono shoots this sequence comes through not only in the performances, but the palpable energy felt by the viewer despite being shot digitally. The blood flows fast and heavy, and as with many other Sono films the sound design and editing here is as punk rock in its volume and aggression as Sono’s direction is. Toss in some fun performances from names like Jun Kunimura (who plays Muto with such glee that it’s almost infectious) and the breathtaking Fumi Nikaido and you have a powerful piece of filmmaking from a truly great director.

Truly cinema’s great punk rock auteur, Sion Sono has created what may very well be not only the best action film of this still very young decade, but one of its better all around feature films. Why Don’t You Play In Hell is about as great as cinema can get. Funny, energetic, action packed, jaw dropping, thematically rich and even emotionally dense, Sono’s film is just the bee’s knees. I’ve seen the top of the mountain. And it’s deliciously bloody. 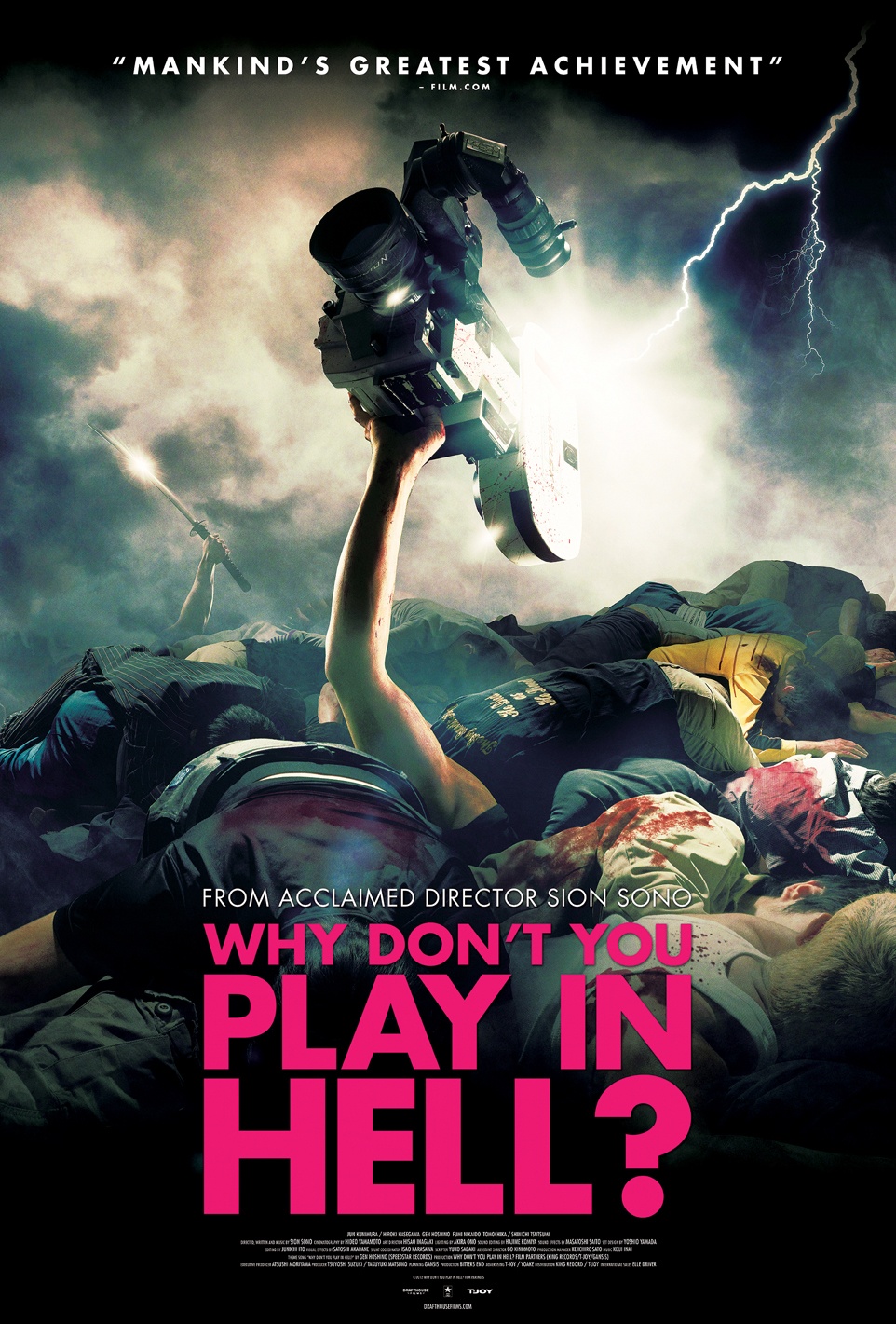