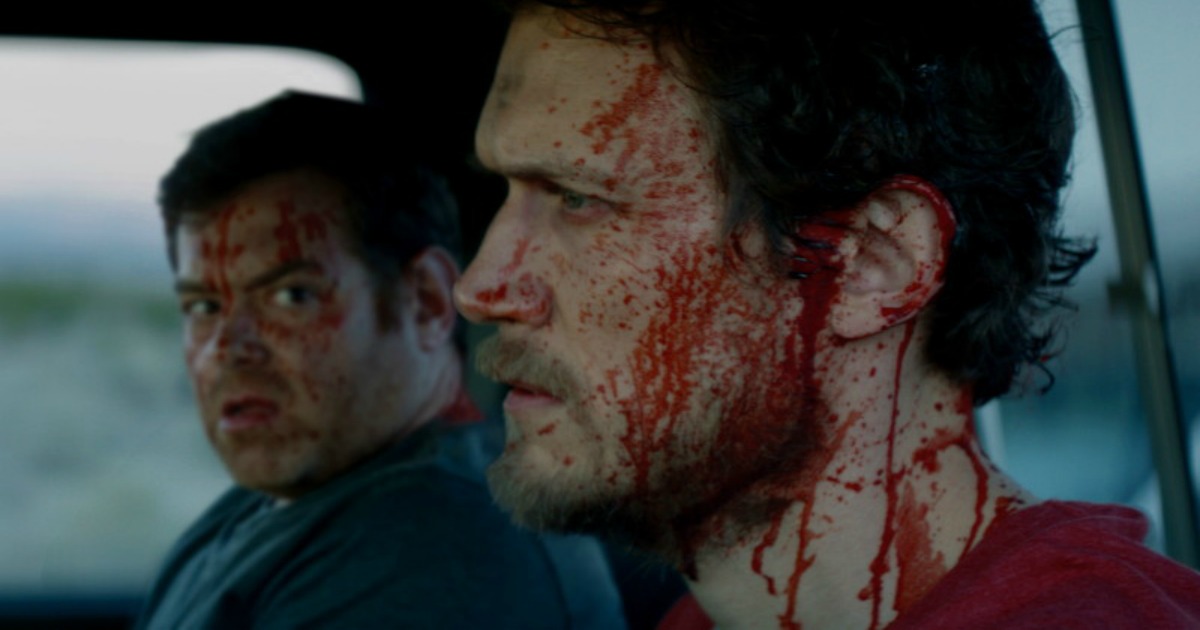 There are few things in the film world more difficult to successfully cobble together than the dreaded horror anthology. With its mixture of narratives, creative voices and actors/actresses, more often than not the horror anthology picture feels closer akin to the type of short film programs many people are flocking to this Oscar season than a fully formed, singular motion picture. For every great one like Trick r’ Treat or Three Extremes there’s a complete dud like the dreadful ABC’s Of Death or the unwatchable Little Deaths. A tough balance to strike between genuine terror and shifting creative visions, the success stories seem to be the exception to the lesser picture’s rule.

That’s what makes the latest attempt at mastering this concept, Southbound, so special. Four directors are accounted for here, including Roxanne Benjamin, David Bruckner, Patrick Horvath and the runaway stars of this show (as they were with the first V.H.S. picture), Radio Silence, with the latter group launching us into this world with the first “vignette.”

The film opens with two men, Mitch and Jack, on the run from their past in both a figurative and horrifyingly literal way. Apparently coming off of what appears to have been a rough and violent night, the two men arrive at a gas station/diner, only to discover that they are in some bizarre purgatory of sorts, with terrifying specters chasing them down. Then, sticking within this desert area (as all of these shorts take place within relative proximity of this one patch of highway), we are introduced to an all girl rock trio on a road trip after what is discovered to be the death of their fourth member. When a tire goes flat, they come across a bizarre but seemingly safe husband and wife, only to discover things are not at all as they seem. Directly resulting in our third piece, we meet a man who is involved in a car accident where he must do his best to save a person’s life with only the guidance of a 911 operator, who is revealed to play a major part in our fourth tale, a story of a man on the hunt for his missing sister. Finally the film concludes with a twist-filled tale of a home invasion, that goes places one would never expect, but directly wraps up this breathtakingly concise and haunting horror picture.

From the opening sequence, one becomes privy to this universe that these tales will be taking in, and thankfully that tone and atmosphere (and reality) is never lost. Instead of simply giving us five separate stories, each narrative here is somehow related be it directly (the second and third stories) or simply taking place, clearly, in the same world (we meet the characters of the second vignette in ostensibly the same shot as the final shot of the first story) and each feels tonally quite similar. Directors Radio Silence open and close the film, which are the two most supernatural sequences, and yet they are also the most engaging thematically and intellectually. Clearly meditating on the idea of one’s past never letting go, these are beautifully made sequences and ones that are as stimulating thematically as they are genuinely unsettling.

The film takes a perverse turn in the second narrative, helmed by Benjamin, entitled “Sirens,” which involves a group of female rockers as they try to salvage whatever they can out of a trip after a tire goes flat. The film, once it leaves the desert, takes a dark turn directly relating to the death of their late fourth member, which concludes in a slightly telegraphed but nonetheless disturbing revelation. The telegraphing of the ultimate twist isn’t much of an issue however, thanks to performances and Benjamin’s craft, this marking her directorial debut after producing such hits as the aforementioned V.H.S.. It’s a story that feels tired, but with a few genuine thrills and some performances that make the revelations here all the more poignant, this really shines as a smaller drama in a picture with much grander narratives.

Following her is Bruckner’s story of a man trying to save a person’s life, that will likely be the short to get the most crowd reaction, but it wouldn’t be without the moral turmoil under our lead’s story. Mather Zickel stars in this story, and the battle within his character on whether or not he should even stay to help this person turns what is ostensibly this minor gorefest into something far more engaging and a real standout within this segmented film. Rounding out the picture is Patrick Horvath’s story of a man in search for his daughter and then Radio Silence return with a home invasion story that sends the film out with a jaw dropping conclusion. Horvath’s short is arguably the only bit of storytelling here’s that truly disposable, but the bizarre places it goes makes it at least deeply watchable. Radio Silence wrap the film up in a perfectly haunting bow with their capper, a seemingly standard thriller premise that goes to places one wouldn’t expect.

Southbound works for reasons many anthology pictures never decide to think of. Instead of building narratives around disconnected narratives that try to be heavy on thrills and light on actual character work, the four directors here go truly from the ground up, taking one location and ultimately on supernatural concept, and introducing shockingly fleshed out characters into it. With some truly superb design and some cinematography that gives this universe a tactile and lived in quality rarely seen in horror pictures, this film, which clocks in at under 90 minutes, does in its tight run time what many features fail to convey over much longer time. And they do so while telling five very distinct, very original and very enthralling narratives. Simply put, this film is an absolute marvel, and one that will do gangbusters in theaters and even more so on VOD.

Watch SOUTHBOUND in theaters 2/5 & on @iTunesMovies and On Demand 2/9. Pre-order it now! radi.al/Southbound