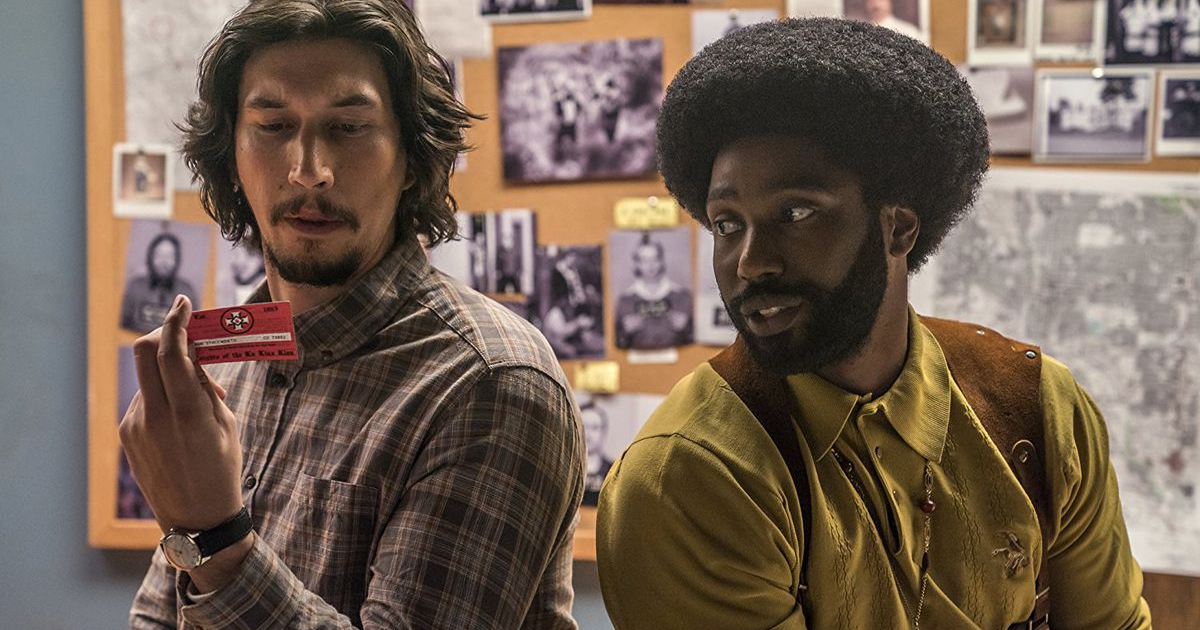 This now legendary quote was first spoken in February 1915 by then-President Woodrow Wilson, following a screening of D.W. Griffith’s groundbreaking and unshakably racist Birth Of A Nation. The film has since become seen as a monumental work of cinema, even in the face of its deplorable portrayal of African Americans in its attempt at recounting a fictionalized birth of the Ku Klux Klan. These words are also given new life by the latest and arguably greatest film from American cinema’s great provocateur.

Coming near the conclusion of Spike Lee’s Earth-shaking BlacKkKlansman, these words are put in lucid, clear-eyed context by one Harry Belafonte, surrounded by young black men and women while recounting a time he witnessed a public lynching as a young boy. Set opposite a scene of a gathering of KKK members hooting and hollering at every cut of the film, “writing history with lighting” doesn’t just become an emblem of system racism that, moments later, Spike shows the world is still as prevalent as ever, but it also becomes the goal for what is the film for this America.

Klansman is, as the opening title card will tell you, based on some “fo real, fo real shit,” a.k.a. the story of one Ron Stallworth who, in the 1970s, became the first black cop hired into the Colorado Springs Police Department. Originally tasked with simple records duty, Ron (John David Washington) is brought in on an undercover job, specifically told to go undercover at a local rally, led by a speech from Kwame Ture, f.k.a. Stokely Carmichael. Seen by local police as a rebel rouser of sorts, Ture’s speech and its initiation by the black students union at the local college is cause for assumed trouble by the department, and with help from Flip Zimmerman (Adam Driver), he both successfully gets close to the group while becoming enamored by one Patrice Dumas (Laura Harrier).

After returning from the sting with newfound respect from his closest peers, he discovers an ad in the local paper promoting the local chapter of the KKK and initiates contact. Now things get interesting. Given the green light by his supervisors, he leads a task force including Zimmerman, with the plan to use his voice and Flip’s physical presence to infiltrate and bring down the branch. Things play out as a weirdly lively and gutbustingly funny buddy cop picture, spearheaded by two top tier performances in its main two roles.

I lied though. The opening of the film isn’t a Spike Lee title card or any fancy introduction to our hero. Instead, it’s a pair of singularly Lee-esque experiments in storytelling. First, we have a scene ripped from Gone With The Wind, that of a crane shot overlooking fallen Confederate soldiers, only to land with a troublingly heroic shot of a tattered Confederate flag. Released in theaters a year to the day from the horrific events in Charlottesville in 2017, BlacKkKlansman is an angry, frustrated, visceral piece of work, and Lee’s entire career has been him attempting to take his vast knowledge of film history and breathe context into the images that fill its canon. Its closest kin being his masterpiece Bamboozled, this film too ends on a source material montage, but instead of racist imagery from him history like in that undervalued classic, Klansman takes us to one year ago, leaving the viewer with nothing to do but come face to face with the same violent racism that just moments ago fostered laughter. The lead up to this closing montage sets the tone, with Terrence Blanchard’s breathtaking score sweeping in while our hero and his love face the same burning cross they were working so hard to stop the entire film.

The second cold open is led by Alec Baldwin as a loudmouth, racist demagog attempting to put together what appears to be a recruitment video for one can only assume the very KKK that we will spend the next two-plus hours scoffing at with complete disdain. Named Dr. Kennebrew Beauregard (whose last name just so happens to be the middle name of our racist Attorney General), Baldwin’s blowhard is simply there to espouse the very belief structure that we will see in the above-mentioned closing montage screamed by men and women living in 2017 and now 2018. These are startling bookends that set the tone for the film one sees and ultimately the conversations it forces them to have after walking out. This is a film of this moment, despite its period setting, both superficially and subtextually. While there are literally characters saying that it’s impossible this country would ever elect someone as racist as David Duke (we have), Lee fills this film with imagery and verbiage that is still being seen and spewed across the country, the same country that enshrines traitorous Confederate soldiers and then spits fire and brimstone when a new generation points out rightly that these monuments are glorifying racism. This is as potent a satire as we’ve seen on the big screen in ages

But in the in-between, Lee has crafted one of his strongest and most laser-sharp works yet in his career, some four decades on. Setting his sights on everything from race relations to the idea of duality and even history’s relationship to and reckoning for art, Klansman is being billed by many as a “messy” film, but that couldn’t be further from the truth. Instead of being laser focused, Lee’s eye is on a lot of subjects here, all with the same sense of import given to them. Be it a montage of young black men and women watching passionately during the Ture speech in the film’s first act, or Stallworth’s wordless response to seeing what a group of white supremacists were using as target practice one evening, this film’s focus is incredibly sharp and never once feels meandering or disconnected from the film writ large.

It’s also one of his most assured aesthetically. Most notably, the film does toy a lot with tone and shifts in mood, all with incredible success. For instance, the film’s finale is set in motion by a petulant but incredibly funny prank phone call from Stallworth to David Duke (played brilliantly by a never-better Topher Grace), only to jump almost directly into Spike Lee’s patented double dolly shot and then the final montage. It’s a jarring change in pace and leaves the viewer genuinely feeling as though the Earth has shifted under their feet. This heightening of tone in all directions is Lee’s calling card, and yet rarely does it play quite this powerfully. Lee’s camera is also sharply focused, playing into these tonal shifts perfectly particularly in the moments in need of strong tension. The photography is rich and textured, be it during a tense lie detector test set in the basement of one of the KKK members we cross paths with or a profoundly moving neo-musical number that is maybe the film’s most beautifully rendered set piece. This set piece is specifically worthy of note as its use of close-ups and rich reds and blacks turn it into one of the few impressionistic moments in the film, a change of stylistic pace that is welcome in what is otherwise one of Lee’s more stylistically mannered films since Inside Man.

Performance is also on the director’s mind here. Led by Washington, Driver, Harrier and Grace, the film is chock a block with top-tier performances, particularly the two bookends. Washington is perfectly suited for this role, giving what is a relatively quiet performance given the bombast of the film he’s set within, but it’s also a deeply nuanced and humane portrait of a man questioning himself at every turn. The main subject of conversation between him and Harrier’s character, the idea of multiple souls being housed within the same person is one of the film’s main themes, and it is shown perfectly within the performance given by Washington. What is the best way to deal with a system issue like racism? Tear it down from the inside or light it on fire from the periphery? This is the central question facing Washington’s Stallworth, and it’s a really beautiful and moving portrait. Driver’s Zimmerman character faces similar troubles, but much quieter, as he himself admits that his relationship to his Jewish faith is on the rocks. Harrier has been the focus of some critical scorn, seen by some as nothing more than a vehicle for exposition, but that would dismiss entirely the beautiful performance given by the actress, a nuanced and powerful portrait of a strong woman certain in her stance and worldview, so much so she’s willing to do just about anything for it. There’s a conviction and a passion there that’s made manifest by Harrier, so to dismiss her performance would be a flawed idea. And finally, Grace’s David Duke is a petulant man-child and Grace is frustratingly good at portraying just that. It’s really a career-defining performance.

And BlacKkKlansman is a career-defining motion picture. It is a monumental motion picture achievement. It’s like writing history with lightning, if you will.