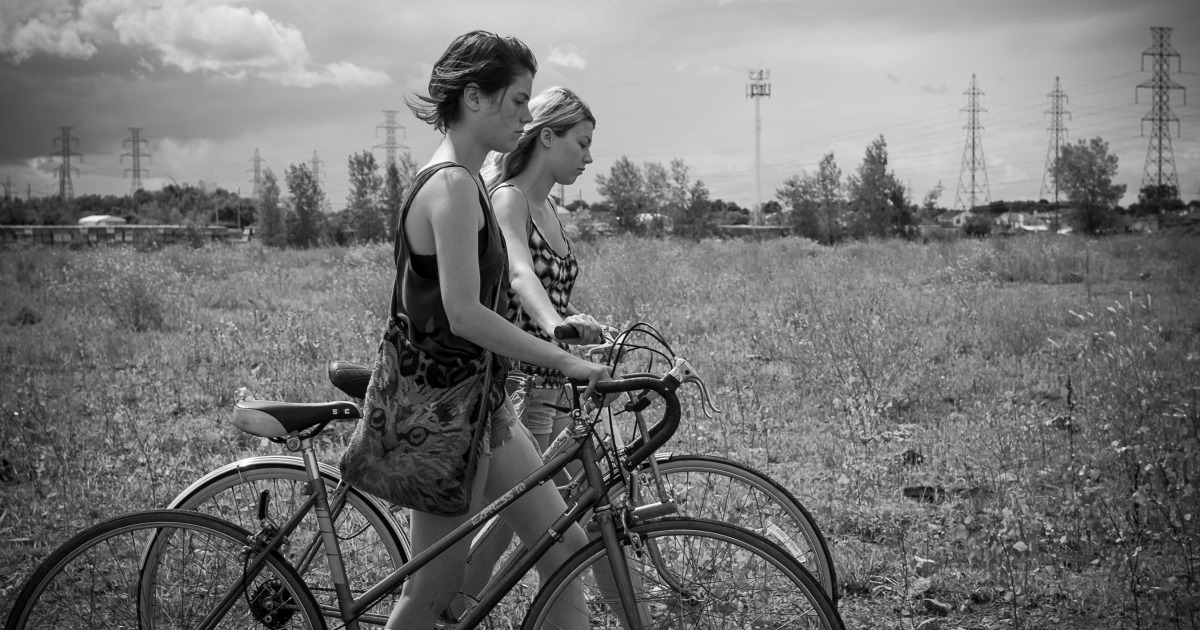 As we leave May in our collective rear view mirror, summer is in full swing. And, in turn, so is summer movie season. However, for every ten noisy, poorly made and superficial Hollywood blockbusters that arrive during this season, there’s always one foreign film or American indie that stands above them all as the real reason to get out of the summer heat. With the summer’s noisiest and most superficial film, San Andreas, in theaters this week, it’s only right that we not only get one of the best foreign language films of the year dropped into our laps, but one that also may be one of the most superb looks at what summer truly means for a certain age bracket.

Entitled Tu Dors Nicole, the film comes to us from director Stephane Lafleur, and gives us a breathlessly charming look at the relationship between summer and one’s experience growing up.

A darling at last year’s Cannes Film Festival where it screened in the Director’s Fortnight sidebar, Lafleur’s film follows the story of Nicole (Julianne Cote), who sees her time in college come to a close, and thus her adulthood truly begins. Stuck in a dead-end job back in her hometown, she pairs the desperation of medial labor with time spent with her best friend, Veronique. However, things forever change when Remi (Marc-Andre Grondin), her older sibling, comes home with his bandmates. Lyrical, evocative and distinctly melancholic, Lafleur’s film is one of the year’s most singularly crafted, and with the summer heat very much a part of the film’s DNA, it’s a universal and in many ways timeless look at the moments following a person’s arrival in adulthood. The moments where innocence is both longed for and mocked, and where the world lays before you, but only seems to want to destroy you.

At first, one will notice, and frankly should, the gorgeous photography. Shot in black and white and on 35mm, the film is supremely crafted and crafted supremely. A relatively static picture, there are a handful of sequences where the camera will move, but the fluidity and motion of the camera almost has the same meandering ease about it as the characters themselves. There’s a shot in particular here, panning right to left as our lead is having a conversation on a telephone, that follows her as her walk through her yard starts, but has no interest in keeping her in frame, instead simply sauntering over to her final destination when it sees fit. It’s overall a startlingly crafted film that both takes its characters and themes into account when putting its stylistic voice together. The grain here is welcome, adding an almost textural component to the film, something that is much welcome here. Highly composed, the film is an assured feature from a voice most film fans aren’t all that familiar with.

Performances are also a highlight here. Côté is an absolute revelation. A quiet performance in a shockingly quiet film, Côté is a beautiful young woman that has distinct charisma and a physicality that really plays into the film’s soft spoken structure and narrative. She speaks volumes with just a look or a smirk, and it really helps give the film both a realism and vitality. She’s primarily a TV actress, so hopefully this will be a big enough vehicle for her to nab some more big screen roles, as she’s a distinct and singular talent. Grondin as her brother, Remi, is fine here as well, although it’s a performance that’s a bit more one note, except in the few moments he shares with Côté. Their relationship is real and relatable, and really the film’s beating heart and emotional core.

A lyrical and evocative look at youth and its relationship to summer, Tu Dors Nicole is a powerful and universal picture that may be light on action, but is heavy on heart and humanity. A welcome bit of counter programming, this foreign language comedy/drama may not be on your radar yet, but when it arrives at your local arthouse, there are few films so far this year that are quite as emotionally resonant and thought provoking.